Dream of dining at a celebrity chef’s restaurant? Unless you are living in, or visiting a city where one is located — like New York or Las Vegas — you’re unfortunately out of luck. Where you are much more fortunate is in your own kitchen. Many celebrity chefs share recipes for dishes they serve at their restaurants, allowing you to cook like Bobby Flay, Aaron Sanchez, or Mario Batali. You may never get a reservation at Wolfgang Puck’s CUT, but you can be inspired by his recipes. Here are five dishes served by all-star chefs in their restaurants you can make, turning your home into the hottest dining spot in town. 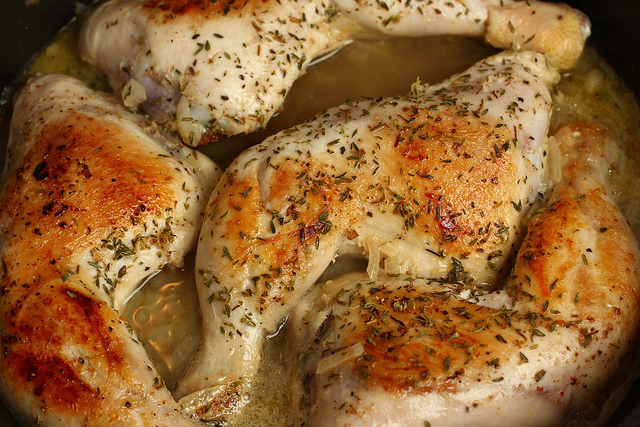 Aarón Sánchez only served pollo borracho (drunken chicken) as a special or for a special occasion. You, on the other hand, can make it whenever you want since Sanchez gave the recipe to ABC. A simple recipe that serves four, Sánchez took his mother’s recipe (one she makes at her restaurant) and slightly adapted it for Centrico and his own personal use.

Directions: Preheat oven to 375 degrees Fahrenheit. Season chicken with salt, pepper, and oregano. In ovenproof skillet, heat olive oil and brown chicken pieces on all sides. Remove chicken from pan and set aside.

Reduce heat, add onion and garlic, and cook for 5 minutes. Add the bay leaves, wine, tequila, and olives. Return chicken to the pan, cover, and cook in the oven until tender and browned, about 40 to 45 minutes. Remove and serve. 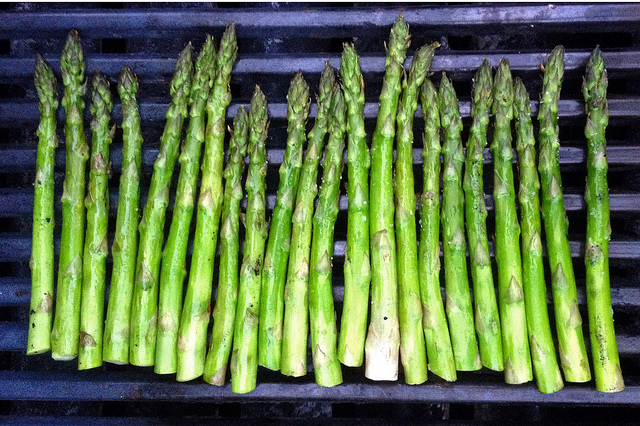 “The asparagus chopped salad at Bar Americain was created for the appetizer portion of the original menu. I loved the idea of grilling the asparagus instead of blanching it because of the slightly smoky flavor it would add to the salad,” Bobby Flay told the AP when he provided this recipe from his restaurant. “I wanted contrast of taste and texture, smoky asparagus, sharp aged cheddar cheese, briny olives, creamy chickpeas and crispy bits of fried pita bread.” Make the dish when you want a new, textured take on your salads.

Directions: To make the dressing, in a medium bowl, whisk together the lemon zest and juice, vinegar, mayonnaise, mustard and honey. Season with salt and pepper. Slowly whisk in the oil until emulsified. The dressing can be made 1 day ahead and refrigerated tightly covered.

To prepare the salad, in a medium saucepan over medium, heat 2 cups of the canola oil until it reaches 360 degrees Fahrenheit on a deep-fat thermometer. Fry the pita strips, in batches, until lightly golden brown and crisp, turning once, about 1 minute. Use a slotted spoon to transfer to a plate lined with paper towels. Season with salt and pepper.

Heat a grill to high or heat a grill pan over high heat. Brush the asparagus with the remaining 2 tablespoons of oil and season with salt and pepper. Grill the asparagus, turning once, until crisp-tender, 4 to 6 minutes. Transfer to a cutting board and cut on the bias into 1-inch-long pieces.

In a large bowl, combine the mesclun, tomatoes, cheese, cucumber, olives, chickpeas, and asparagus. Add half of the dressing, season with salt and pepper, then toss well to coat. Divide the salad among large dinner plates. Drizzle with more of the dressing and top with the pita chips. 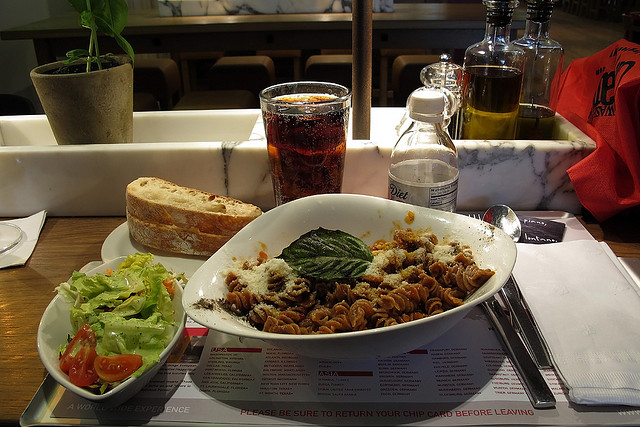 When Eataly started, Mario Batali opened up to Food & Wine, providing several recipes like this ragù. Eataly has several locations across the U.S., and was started by Batali and restauranteur Joe Bastianich. Part artisanal market, part restaurant, Eataly sells ingredients, prepared dishes, wine, and Italian ingredients not generally available in the U.S. Thankfully, none of the ingredients here are too crazy, and the dish serves eight.

Directions: In a large enameled cast-iron casserole, heat the olive oil. Add the carrot, celery, onion and garlic and cook over moderate heat, stirring occasionally, until softened but not browned, about 10 minutes. Add the pancetta and ground beef and cook, breaking up the meat with a wooden spoon, until no longer pink, about 8 minutes. Add the tomato paste and cook over low heat, stirring occasionally, until shiny and rust-colored, about 10 minutes.

Add the diced ham, milk, white wine and water to the casserole and simmer the ragù over moderately low heat, stirring occasionally, until it is thick and saucy, about 1 hour and 15 minutes. Season the ragù with salt and pepper. In a large pot of boiling salted water, cook the fusilli, stirring often, until al dente. Drain the fusilli and add it to the sauce. Stir well to coat the pasta. Transfer the pasta to shallow bowls and serve right away, passing grated pecorino at the table. 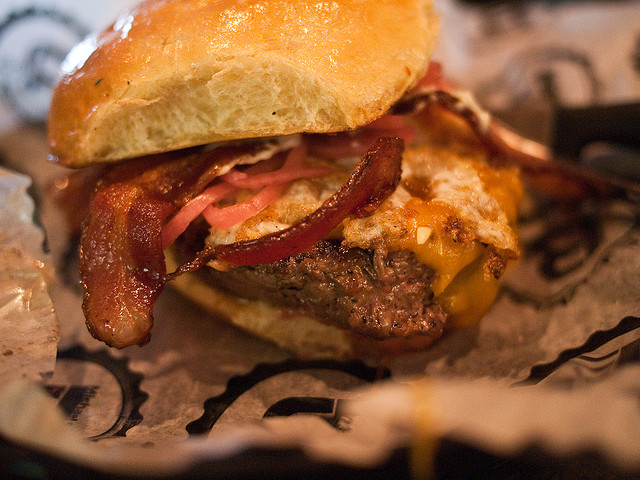 From the spicy ketchup to the pickled onions, Food Network has the answer to your Lola Burger cravings. Michael Symon provided the recipe for his signature dish, which comes from his Lola restaurant in Cleveland, Ohio. For the burger itself, Symon favors using a mix of chuck, sirloin, and brisket. The ketchup and onions can be made ahead of time and stored for up to one month.

Directions: Build a medium-hot fire in your grill or preheat a stovetop grill pan. Cook the bacon in a saute pan over medium-high heat, turning once, until crisp, about 5 minutes. Remove the bacon to paper towels to drain. Reserve the bacon fat in the pan.

Form the ground beef into 4 patties, each about 3½ inches in diameter. Season the patties with salt and cracked black pepper, to taste. Put the burgers on the grill or in the grill pan and cook for 3 minutes. Flip and top each burger with a slice of cheese. Grill for 3 minutes for medium-rare. Remove them to a plate. Add the English muffins to the grill or grill pan and toast for 1 minute.

Cook the eggs sunny side up in the bacon fat while the burgers rest. Build the burgers by sandwiching them between the muffin halves along with pickle slices, red onion, bacon, an egg, and some spicy ketchup.

To make the pickled onions, pack the onions in 2 (1-quart) jars and cover with enough water to come within ½-inch of the rim. Pour the water out into a measuring cup. Note the volume, pour off half the water, and replace it with vinegar. Add 2 tablespoons sugar and 2 tablespoons salt for every 3 cups of liquid. Pour the vinegar mixture into a nonreactive saucepan, add the mustard seeds, red pepper flakes, coriander seeds, black peppercorns, garlic, and bay leaves, and bring to a boil over high heat. Allow the liquid to boil for 2 minutes, and then remove it from the heat. Pour the hot liquid into the jars to cover the onions and screw on the lids. Refrigerate for up to 1 month.

For the spicy ketchup, in a nonreactive 2-quart saucepan over medium heat add the olive oil. Add the onion, garlic, and a large pinch of salt. Saute until translucent, about 2 minutes. Add the Fresno chiles, ancho chile, and red pepper flakes. Cook for 1 to 2 minutes. Add the brown sugar, cumin, cinnamon, tomato paste, and vinegar and simmer for 10 minutes. Stir in 3 cups of water, bring to a gentle simmer, and cook over low heat for 2 hours. Remove the ketchup from the heat and let cool for 15 minutes. Discard the cinnamon stick. Puree the mixture in a blender and strain through a sieve, pushing down on the any solids. Let cool and pour into a storage container. Cover the container and refrigerate for up to 1 month. 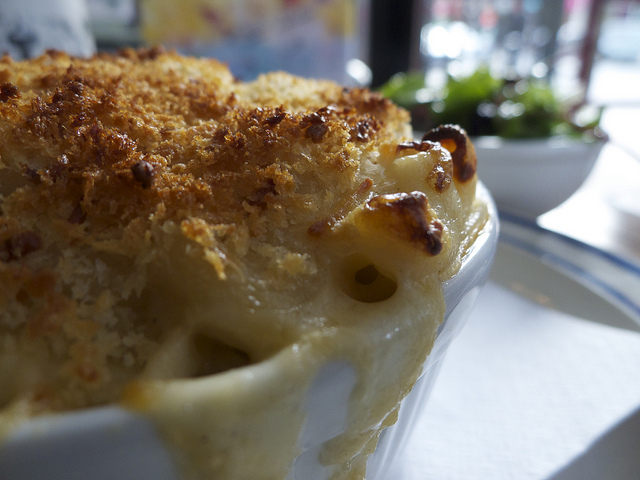 Wolfgang Puck knows a thing or two about cooking. Arguably one of the first celebrity chefs, Puck has been opening restaurants, creating recipes, and putting his own spin on food for decades. To get a Puck-styled macaroni and cheese, make the version served at CUT his restaurant which is located in Beverley Hills, Las Vegas, and London. The recipe is via Williams-Sonoma, and serves between eight and ten.

Directions: Preheat an oven to 375 degrees Fahrenheit. Butter a 3- to 4-quart square baking dish. In a 4-quart saucepan over medium heat, melt the 6 tablespoons of butter. Stir in the flour and cook, stirring, until blended, about 1 minute. Add the bay leaf and slowly whisk in the milk until smooth. Simmer, whisking occasionally, until the mixture is thickened, 14 to 16 minutes. Remove the bay leaf and discard. Whisk in the crème fraîche and the 1 1/2 teaspoons fleur de sel and bring to a simmer. Remove from the heat and stir in 1¼ cups each of the mozzarella and cheddar. Season with fleur de sel and white pepper.

In a large bowl, combine the pasta and cheese sauce and stir in 2 cups of the mozzarella. Transfer to the prepared baking dish. Sprinkle with the remaining 1/2 cup mozzarella and cheddar and then with the bread crumbs. Bake until the bread crumbs are golden and the cheese is bubbly, about 30 minutes. Let stand for 10 minutes before serving.