Girl Scout Cookies: A Healthy Tradition or a Fattening One?

It’s early spring and that only means one thing for sweet tooths everywhere: Girl Scout Cookie Season is almost over. Starting in late January and finishing up in early April, the nation’s Girl Scouts can be seen everywhere, and as they stalk customers in grocery stores and on street corners with their packages cookies, a lot of the time, their sweet faces and treats win over, and patrons end up pulling out their wallets. Luckily, it’s all for a good cause, as the tradition is praised by the Girl Scouts of America as “the premier entrepreneurship opportunity for girls.” However, now,  some courageous critics are raising their voices, and even advocating for people to let the tradition die. Say it ain’t so, but why?

According to NPR, some doctors and parents now believe that the idea of young girls selling high-fat cookies no longer aligns with the public health realities our nation is facing today. As obesity rates skyrocket, and more and more patients get diagnosed with high cholesterol and diabetes, some doctors are calling on Girl Scouts to change their tune and instead focus on a new way to flex their entrepreneurial muscles. In its report Tuesday, NPR highlighted John Mandrola, a heart doctor in Louisville, Kentucky, who wrote in a blog post, “The problem is that selling high-fat sugar-laden cookies to an increasingly calorie-addicted populace is no longer congruent with [the Girl Scouts’ aim to make the world a better place].”

Diane Hartman, a writer and editor in Denver, agrees. She wrote an op-ed in the Denver Post: “Why are we letting Girl Scouts sell these fattening cookies? They have some trans fat, some palm oil and are high carb … all those things you’ve probably been trying to avoid.”

Unsurprisingly, not all consumers seemed to agree with Mandrola and Hartman’s comments over the past week, but the two agitators still bring up a good point: Are Girl Scouts perpetuating an obesity trend and subsequently keeping the world from becoming a better place? That much is still up for debate, but Robert Lustig, a pediatric endocrinologist at the University of California, San Francisco, actually agrees with the criticism. According to NPR, he says that the main problem is that Girl Scout cookies are never consumed in moderation, and thus they help contribute to the obesity epidemic the nation is now suffering. He explained, “If you gorge out on Girl Scout cookies and that’s all you did all year, it wouldn’t matter. But you don’t. Girl Scout cookies are just another sign of the problem of hyperconsumption. … It’s no better than Tony the Tiger selling Frosted Flakes, and in a way it’s worse because you’re co-opting innocent children.” 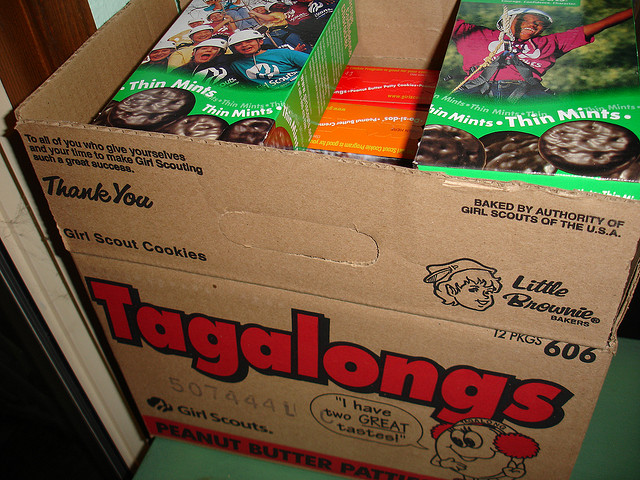 Oh, moderation. What a concept. Some believe that self-control can be practiced when eating Girl Scout cookies; others disagree. Mandrola is one of the latter, and he maintained in his blog post: “I spend my days telling patients to eat less, eat better and exercise. So to me it seems like the Girl Scouts are profiteering off an obvious public health problem.”

Everyone still has differing opinions on the Girl Scout debate but all we can is: Mandrola, that means no more Samoas for you.