Here’s How To Get Your Kids To Eat Healthy 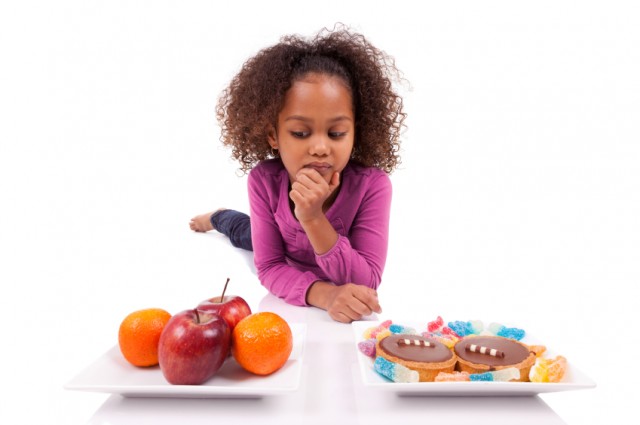 One of the most notorious struggles of parenthood is getting your child to diversify their palette and to eat their vegetables. Now, after all the parenting books and sage advice from experts, a new study has found a trick that any parent can get on board with: bluffing. According to researchers at Northwestern University, who published their findings in the Journal of Consumer Research, telling children that a certain item is healthy will make them less likely to eat it.

As such, it seems only fitting that not telling children that vegetables are healthy will encourage them to consume healthier foods. To test this hypothesis, the scientists read children stories about a girl who ate carrots. One group of children were told about the benefits of the girl eating carrots, while the second group was told nothing about advantages.

“We predicted that when food is presented to children as making them strong or as a tool to achieve a goal such as learning how to read or count, they would conclude the food is not as tasty and therefore consume less of it,” said study authors Michal Maimaran (Kellogg School of Management, Northwestern University) and Ayelet Fishbach (University of Chicago, Booth School of Business) in a statement.
Upon being offered a snack, children who were told about no benefits of eating carrots ate more than those who knew why carrots were good. The logic behind this correlation is that when children know something is “healthy,” they assume it will taste bad.

“Parents and caregivers who are struggling to get children to eat healthier may be better off simply serving the food without saying anything about it, or (if credible) emphasizing how yummy the food actually is,” the authors conclude. The findings of this study are significant, as it allows parents to try a different method in getting their kids to eat healthy.

Childhood obesity has double in children and quadrupled in adolescents over the past thirty years, according to data from the Centers for Disease Control and Prevention (CDC), meaning that understanding how to promote a healthy diet is an important area to research. As of 2012, one third of American children and adolescents were overweight or obese and data from the CDC found that the root cause in most cases is a “caloric imbalance” by genetic, behavioral and environmental factors.

According to Parents magazine, in order to get children to healthier, parents can make several changes, including: making a meal schedule, planning dinners in advance, introducing new foods slowly, and cutting back on junk food whilst allowing treats. What’s more, nutrition experts have found that parents should not use “food bribing” as an incentive for good behavior as it creates negative associations with food. For example, giving your child a treat for good behavior or forcing healthy foods with an activity incentive can make them throw more tantrums and dislike healthy foods further.

Another great way to encourage children to eat healthy foods is to set an example for them. After all, a study from The University of North Carolina at Chapel Hill’s Gillings School of Global Public Health, published earlier this year in The American Journal of Clinical Nutrition, found that poor eating habits are learned from children’s homes and their future dietary patterns is determined earlier on in life.

“This is really what is driving children’s obesity,” said Barry Popkin, PhD, W.R. Kenan Jr. Distinguished Professor of nutrition at UNC’s Gillings School of Global Public Health, in a university press release. “Eating fast foods is just one behavior that results from those bad habits. Just because children who eat more fast food are the most likely to become obese does not prove that calories from fast foods bear the brunt of the blame.”