How Even Moderate Drinking Harms Your Heart 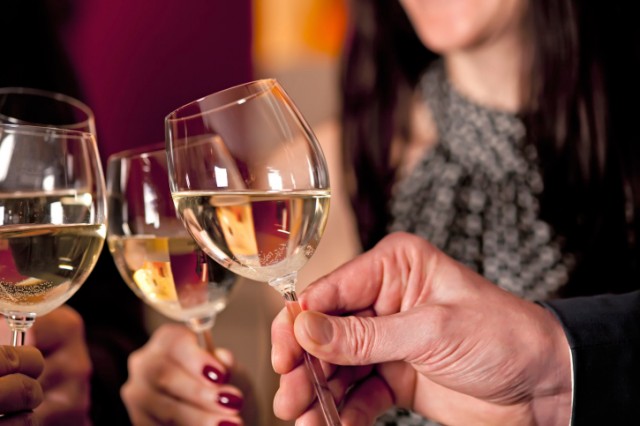 Over the past few years, there has been more information released regarding how healthy (or unhealthy) alcohol is for you. One of the more mainstream beliefs surrounding alcohol consumption is that certain types of alcohol can be beneficial. Namely, drinking red wine has been associated with good heart health. But a new study published in the British Medical Journal has found that drinking a mere two glasses of wine (or less than a pint of beer) a day can be detrimental to your health. Translation: Even moderate alcohol consumption may be bad for you.

Previously, several studies have found alleged benefits of consuming alcohol. Red wine, for example, has been credited to being heart healthy since it is rich in antioxidants, which may play a role in preventing heart disease. What’s more, red wine lowers your LDL cholesterol (also known as the “bad cholesterol”), controls blood sugar, keeps your memory sharp, can fight off colds, may prevent cancer, and aid in weight loss. It’s not just wine, as researchers at the University of Illinois in Chicago have found that men who have had some beers are smarter; the beer-drinking men solved 40 percent more of the problems that their sober counterparts in their study.

In the new study, researchers — from the London School of Hygiene and Tropical Medicine, University College London, and University of Pennsylvania — challenge the predisposition that a little alcohol can be beneficial with their findings that reducing alcohol intake can lower the risk of heart diseaser and reduce your blood pressure.

“While the damaging effects of heavy alcohol consumption on the heart are well-established, for the last few decades we’ve often heard reports of the potential health benefits of light-to-moderate drinking,” said Juan P. Casas, senior author and Professor of Epidemiology at the London School of Hygiene & Tropical Medicine in a university press release. “However, we now have evidence that some of these studies suffer from limitations that may affect the validity of their findings. In our study, we saw a link between a reduced consumption of alcohol and improved cardiovascular health, regardless of whether the individual was a light, moderate or heavy drinker. Assuming the association is causal, it appears that even if you’re a light drinker, reducing your alcohol consumption could be beneficial for your heart.”

The researchers analyzed data from over 260,000 people by gathering drinking habits and cardiovascular health from 50 studies. After looking into facts, they were first able to see that individuals with genetic variant of the ‘alcohol dehydrogenase 1B’ gene (resulting in a slower breakdown of alcohol) had a lower alcohol intake due to the unpleasant symptoms of nausea and facial flushing affiliated with lower rate of alcohol breakdown. As such, the researchers were able to use the gene to identify people who had a lower alcohol consumption.

Upon analyzing the cardiovascular health of those with the genetic variant — and comparing it with those who did not have the variant — the researchers were able to conclude that those who consumed less alcohol have better heart health. The findings have led the researchers to believe, and suggest, that reducing alcohol intake will result in improved cardiovascular health.

genetic variant of the ‘alcohol dehydrogenase 1B’ gene – See more at: http://www.lshtm.ac.uk/newsevents/news/2014/heart_health_alcohol.html#sthash.BFfjB3YI.dpufwith lower alcohol consumption have better heart health suggesting that decreasing alcohol consumption will have a significant improvement on your cardiovascular health.

“For many years, many people have been uneasy about the apparent cardio-protective effect of drinking light-to-moderate amounts of alcohol, said Dr. Caroline Dale, study co-author and Research Fellow at the London School of Hygiene & Tropical Medicine. “This is partly because of reservations about possible bias in existing observational evidence, but also because the biological mechanism behind such a cardio-protective effect has proved elusive. In our study, we approach the question from a different perspective using a Mendelian randomization study design, and find quite different results. We found that people who tend to drink lower amounts of alcohol on average had lower risk of coronary heart disease at all levels of alcohol consumption, including amongst those who were light-to-moderate drinkers. As such our findings challenge the status quo that drinking low-to-moderate amounts of alcohol is good for your heart.”