How Gisele Bündchen’s Lifestyle Can Get You in Supermodel Shape 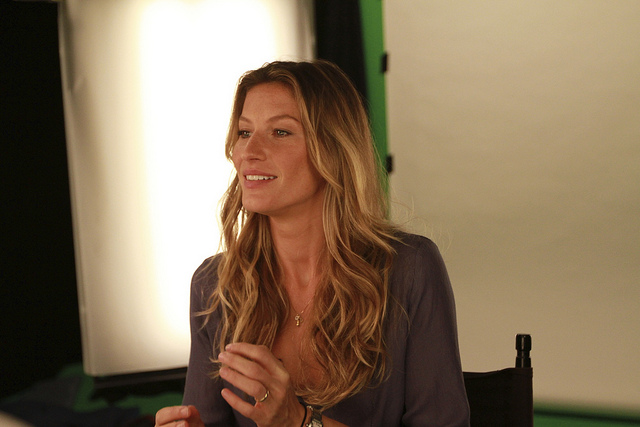 She is the newest face of Chanel No. 5, is smiling alongside soccer star and fellow Brazilian Neymar on the June edition of Vogue Brazil, and is one of Forbes’ most powerful women in the world — and Gisele Bündchen does all of this while looking as fabulous as ever. But don’t write off her success, or body, as only luck or genetics. Bündchen states that ultimately, it is up to the efforts you make.

“Like I tell my five sisters, who don’t work at it very hard at all, whatever you put in, you get out,” The Boston Herald reports the supermodel told Vogue UK in 2011. “I’m not afraid of working hard at anything, whatever it is. I just always want to be the best that I can.” That mindset hasn’t changed much since then. “I travel a lot, so my routine varies greatly, depending on where I am,” Bündchen told Marie Claire Brazil in April 2014 (via FabFashionFix). “But I try to work out an hour a day every day. Usually [I] do not have that time, so I try to do at least 15 minutes of yoga or stretching.”

Driven, focused, and constantly moving, the 33-year-old Brazilian beauty, and mother of two combines common sense edicts and healthy eating with hard work to stay in shape. Although you may not be able to train as often as the model, we’ve gathered up all the information you need to know what workouts Bündchen follows, and how her lifestyle impacts her health.

One way Bündchen maintains her killer body is by regularly practicing kung fu. “The stance work and kicking techniques improve muscle tone and flexibility in the lower body. Blocking drills and hand techniques do the same for the upper body, especially the shoulders and arms,” Yao Li, Bündchen’s instructor at the Boston Kung Fu Tai Chi Institute told Shape in 2012. “Drills that combine hand and foot work require strength and agility in the core muscles, and help to increase coordination and balance.” At the time, Bündchen had been practicing with Li for four years, averaging three, 90-minute sessions each week.

The sessions start with 10 to fifteen minutes of stretching. This is followed by choreographed moves–included weapon form and hand form techniques. Then it is on to ab work, and more upper body strength training. As examples of kung fu moves Li might include in a routine for Gisele, he detailed the upward block, downward block, and straight kick. To start, it is recommended you gradually increase the number of times you perform each over a thirty-day span. As you become more comfortable, and accustomed to the moves, you increase the reps, and the speed. You can find graphics, and explanations for the moves here.

“I do not have a specific exercise. I love yoga, boxing, Kung Fu, Pilates, surfing, horseback riding, playing volleyball,” Bündchen explained in the previously mentioned Marie Claire interview. “The important thing is how good I feel after exercising. When I don’t feel that my day was incomplete.” One only needs to look at the snaps paparazzi regularly take of her and her football playing husband Tom Brady to see that is definitely the case. In January, Popsugar spotted the pair paddle-boarding while vacationing in the Bahamas.

Prior to that, the outlet had noted that Bündchen has been active her whole life, participating in gymnastics, ballet, and volleyball when she was younger. Old habits die hard, and from fitness classes to staying active, Bündchen does not idle away her time at home. In addition to kung fu, Bündchen (along with a host of other celebs like Gwyneth Paltrow and Kate Hudson) has frequented Tracy Anderson‘s Studio City location. The model is also a fan of yoga, and if all of that wasn’t enough, she also frequently bikes, surfs, and rarely sits at home in front of the television.

Fitness of course, only goes so far. Bündchen keeps an overall healthy lifestyle, and doesn’t shy away from making time for herself. “People think if you look after yourself you’re being selfish, you know,” she said in the Vogue UK 2011 interview. “But what Tom taught me – and he is a living example of this – is that in order to be your best, you have to honor your own needs first.” This she explained, helps her to be a better mom, wife, sister, and friend. In another Vogue UK interview–this one in 2014 — she revealed she hasn’t had soda in years and eats healthfully so that her kids will follow her example. They eat what she eats, causing her son’s first whole foods to include papaya and avocado.

What else is in the Bündchen-Brady household? Talking to Food & Wine, Bündchen stated she often makes fruit leather with her son as a sweet, but still healthy snack for him to take to school. She’ll drink a homemade lemonade, made by blending the juice of “three lemons, peel fresh aloe, add a teaspoon of coconut nectar and a gallon of water.” She tries to refrain from eating too much red meat and will drink alcohol only in moderation.

In the end, having a Bündchen-style diet boils down to finding activities you love to do and taking the time to actually do them. Don’t be afraid to say you’re going to focus on yourself, and set goals. On top of that, pick fresh, whole foods you can enjoy eating, but don’t cut out everything you love from your diet.