How Money Can Make Your Brain Healthier

Scientists and educators alike have been trying for decades to learn why some children can learn better than others. In education today, it’s a largely held belief that children who grow up in lower socioeconomic statuses struggle more in school, and are often grade levels behind their peers in terms of language development and other abilities. Now, researchers have a biological component to back up these behavioral trends, as one recent study shows that the size of a child’s brain has a distinct connection to his or her family’s household income. In some ways, this information reinforces what scientists already assumed. On the other hand, it’s confirmation that they are on the right track to learning more about how the brain works and developing strategies for combating environmental factors that create inequalities.

The crux of the study is this: brain structures necessary for higher-level thinking tend to be larger in the brains of children whose household incomes are also large. The observations were taken of 1,099 children between the ages of 3 and 20, and results were controlled for factors such as genetic ancestry, age, and sex. Researchers studied the size of the brain’s cortex, the surface of the brain that is wrinkled to contain more knowledge and learning abilities. The findings showed that in the lowest income bracket of $25,000 per year or less, the cortexes in children’s brains were up to 6% smaller than those of children whose families made more than $150,000 per year.

Researchers gathered their information by imaging the brains of the participants, and also discovered that the differences were most noticeable in the areas of language development and decision-making skills.

What was most telling is that an infusion of just a few thousand dollars has a profound effect on brain development when a family is struggling to make ends meet. The researchers inferred that income might be a proxy for environmental stresses that affect brain development. “For a family making $20,000 a year, having an extra $20,000 would make a huge difference in terms of family stress — are we going to buy food or are we going to pay the rent,” Elizabeth R. Sowell, the study’s senior author, told the San Diego Union-Tribune. “But that $20,000 doesn’t make the difference between eating and paying rent once you’re at $200,000. It’s going to be, do we get guitar lessons or pay for summer camp?” 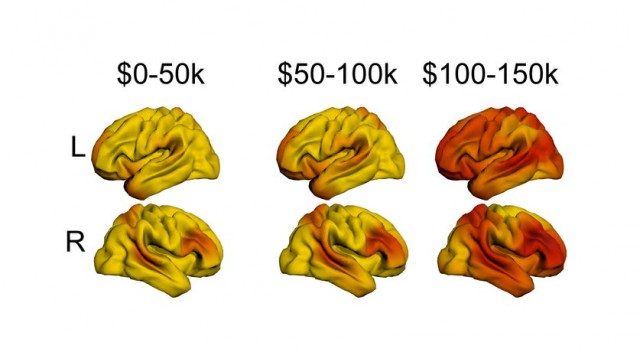 In the photo above, the lighter brain diagrams depict more brain growth between income brackets. The lightest brains are in the lowest income range, meaning that brain growth occurs the most when incomes rise from $0 to $50,000. Brain growth within the $100,000 to $150,000 range is the least affected by an extra few thousand dollars, hence the darker color.

For some scientists, the findings validate long-held beliefs with more concrete information. In terms of providing adequate early intervention programs for struggling students, this study helps to provide objective data to inspire additional research. “We do know that interventions work, but we just don’t know why,” said Lisa Freund, a developmental psychologist and cognitive neuroscientist at the National Institute of Child and Human Development. Research for improving development programs for young students can be better directed in light of this study’s findings, Freund told the Union-Tribune.

The reason ongoing research is so important is because the study’s authors don’t believe that the initial size of the brain is an absolute indicator of long-term success. Sowell, who is the director of the Developmental Cognitive Neuroimaging Laboratory at Children’s Hospital Los Angeles, said that not every child in a low-income household had a smaller surface area of their brain. As with all things human, there weren’t absolutes. What’s more,  the brain’s elasticity — its ability to change and shift even after many years — means that children from low-income households have a chance to grow their brain surfaces, even if they do start out as slightly smaller. Sowell, in her interview with the Union-Tribune, advocates for additional research to discover what stimulates brain growth effectively.

In a commentary about the findings, Chris Gyngell wrote on the University of Oxford’s Practical Ethics blog that the specific environmental factors at play haven’t been identified through this study, only that those factors are likely influenced by income. Gyngell also pointed out that other studies have indicated this could have something to do with genetics, and not necessarily be all about the nurture aspects of a child’s upbringing.

Gyngell’s main thought is that if income really does affect children’s cognitive abilities, then decisions about welfare allocation and other aids for low-income families have much more dire consequences than just the present time. They actually might impact how a child fares decades down the line — and now there’s science to back it up. “…If we want to increase equality of opportunity, we may need to look beyond increasing access to social services like good schools,” he wrote. “By the time the children from poor socioeconomic groups go to school, they may already be at a biological disadvantage. The game would already be rigged to favour the rich.”

If science is able to prove that there is a causal relationship between income and brain size, it renews a call to research to determine the specific factors surrounding income that play a role in a child’s development. It’s likely a combination of many things, but figuring out those causes gives educators the best chance to combat those predispositions while the children are still young.