Hurricane Harvey has stranded four cruise lines with 20,000 passengers stranded likely until next week, the Houston Chronicle reports. Officials said the Port of Galveston shut down Friday. The passengers stuck at sea are on three Carnival cruises and one Royal Caribbean boat. 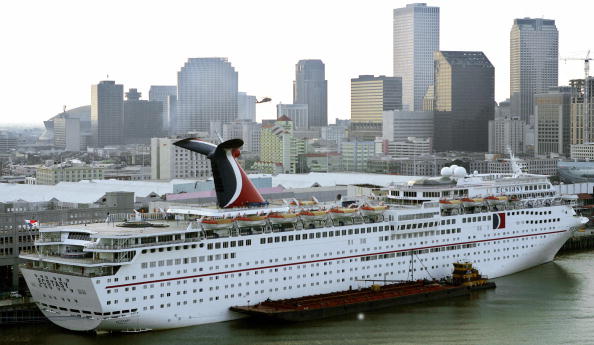 The Ecstasy cruise liner is moored against the skyline of hurricane-hit New Orleans in September 2005. | OMAR TORRES/AFP/Getty Images

With the Galveston port shut down, ships will be forced to either head to other ports or wait at sea until the storm subsides, which possibly could be as late as Tuesday or Wednesday, said Roger Quiroga, the Port of Galveston’s external affairs director, as reported by the Houston Chronicle.

Two of the Carnival ships previously scheduled to dock in Galveston will instead stop in New Orleans, Carnival spokesperson Christine de la Huerta told the Houston Chronicle. She added that the third ship will spend the night docked in Cozumel and depart for Galveston tomorrow.

The one Royal Caribbean ship at sea that is affected by the hurricane will stay put behind the storm and is scheduled to return to Galveston Sunday, per the Chronicle.

The eye of the story is expected to make landfall Friday night or early Saturday. Earlier today, Harvey strengthened to become a Category 3 level storm. These storms have winds ranging from 111 to 130 miles per hour and cause significant damage to property, humans, and animals. They can cause extensive inland flooding, and electricity and water may be unavailable for several days to weeks after the storm, per Coastal Living.

The mayor of Galveston, James Yarbrough, warned residents to shelter in place as Galveston is expected to be inundated with water as a result of Hurricane Harvey.

Thousands have been fleeing their homes in Texas as the Hurricane strengthens, and gas prices are expected to rise across the country, with some refineries in the affected area expected to shut down.