Is the Fast-Food Industry Driving Income Inequality in America?

There are more than 3.5 million fast-food workers in the United States, and many of them think they’re getting the short end of the stick. A nationwide campaign to raise minimum wage, primarily made up of fast food workers, has been ongoing for more than a year. And McDonald’s workers made headlines when, in some places, protestors were demanding wages as high as $15 an hour. Wage stagnation has certainly hit most Americans hard, but for workers in low-wage industries, supporters argue, the stagnation has become downright punishing, making every day a struggle.

But is pay disparity in the fast food industry really as bad as protestors claim? Can fast food companies even afford to pay workers higher wages? Let’s break down the data. How much do fast food workers make now? About $9.00 an hour, though the most unfortunate make just $8.18 an hour, or about $17,000 a year. Compare that to the average annual wage across the United States, which was about $44,000 in 2013, according to the Social Security Administration, or almost three times what the average fast-food worker makes in a year.

In a word, yes, it does seem that minimum wage workers are getting a pretty shitty deal. But how well is the fast food industry at large doing, anyway? Well, last year, the fast food industry brought in revenues of more than $190 billion, a figure that is expected to rise to more than $210 billion by 2018, and you’ll notice that there is something of a “disparity” between the revenue and wage when it comes to fast food. In fact, according to Statista, the cost of wages for the fast food industry remains just 24 percent of the industry’s revenue.

Okay, but what about the argument that, in an industry with such slim profit margins, fast food companies really can’t afford to pay their employees any better. This makes a lot of sense; if a fast food company isn’t making much profit in the first place, the company’s hands are effectively tied.

As it turns out, though, fast food companies are doing pretty well; yes, the margins are fairly thin, but they’re only getting better. Profit margins for privately held fast food companies are currently 4.6 percent, up from 2.1 percent in 2009. Meanwhile, the percentage of revenue spent on payroll has effectively decreased from 23.5 percent to 22.9 percent in 2013, according to data from Sageworks. So while it’s true that the fast food industry does have slimmer profit margins than many other industries, increasing revenues seem to have gone straight into executives pocketbooks, while wages for workers have continued to remain stagnant.

Catherine Ruetschlin, a senior policy analyst who authored a recent study on pay disparity conducted by Demos, a public policy organization based in New York, notes that pay disparity is largely the result of “two factors: escalating payments to corporate CEOs and stagnant poverty-level wages received by typical workers in the industry.”

Pay disparity is an ongoing problem in America, and CEO to worker pay ratios are largely getting worse across the board, but when it comes to the fast food industry, the situation is at its most dismal. For instance, according to the watchdog group, Executive Paywatch the CEO-to-worker pay ratio was 331:1 in 2013. For minimum wage workers, the pay ratio is still worse at 774:1, but for fast food workers, pay disparity is so stark it’s almost a little sickening. According to Ruetschlin, “in 2012, the CEO-to-worker compensation ratio in fast-food topped 1,200-to-1. Further, the CEO average pay since 2000 has more than quadrupled, while fast-food workers’ wages have increased just 0.3 percent since the new millennium. 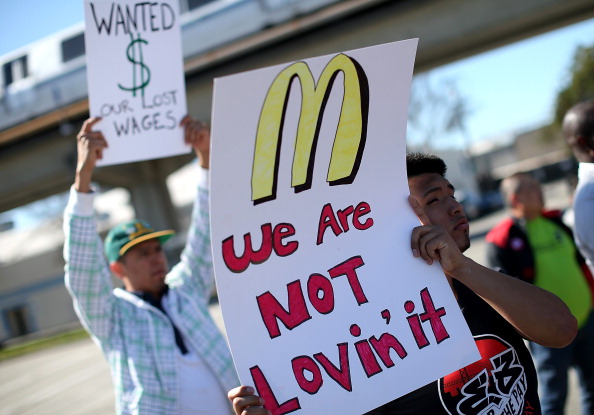 As a result, many fast-food workers struggle to get by; a study conducted last year by economists at the University of California, Berkeley concluded that more than 52% of fast-food workers rely on taxpayer-funded public assistance programs, such as SNAP (otherwise known as food stamps) or Medicaid. These programs (SNAP and Medicaid, along with income eligible tax credits) cost taxpayers an estimated $7 billion annually. Essentially, the Berkeley economists argue, the government is helping to subsidize corporate profits because employees of these companies are unable to sustain themselves without taxpayers assistance.

“The taxpayer costs we discovered were staggering,” says Ken Jacobs, of the Center for Labor Research and Education at the University of California Berkeley. “People who work in fast-food jobs are paid so little that having to rely on public assistance is the rule, rather than the exception, even for those working 40 hours or more a week,” Jacobs added.

In total, taxpayers contributed a total of about $7 billion in public assistance programs for fast-food workers, and frontline fast-food workers are enrolled in public assistance programs at more than twice the rate of the overall workforce. Medicaid and Children’s Health Insurance Program (CHIP) costs account for most of that $7 billion, coming in at about $3.9 billion; less than 13% of fast-food jobs provide healthcare benefits of any kind, the UC Berkeley study found. A similar study conducted by the National Employment Law Project found that McDonald’s workers alone received $1.2 billion in public assistance from taxpayers.

“This is the public cost for low-wage jobs in America,” said UC Berkeley economist Sylvia Allegretto, one of the authors of the study. “The cost is public because taxpayers bear it. Yet it remains hidden in national policy debates about poverty, employment and public spending.”

Further, fast-food workers are often trapped in lower-wage jobs because, despite what the company might claim, there is rarely room for advancement within the industry. “The truth is that millions of fast-food workers will never have an opportunity to move beyond front-line jobs. That’s why it’s so critical that instead of empty promises of future possibilities, the industry act to ensure that the jobs most fast-food workers occupy provide the wages and benefits workers need to support themselves and their families,” said Christine Owens, executive director of the National Employment Law Project, in a press release.

The UC Berkeley study has also helped to dispel many myths about the kinds of people who are employed by fast-food companies. For instance, the majority of the fast-food industry’s workers are middle aged — not teenagers living with their parents. Further, more than 60% of fast-food workers are the main income earners in their families, and about a quarter are parents supporting at least one child.

But some conservative economists argue that raising the minimum wage will have unforeseen consequences: for one, companies would most certainly raise the price of your burger and fries, possibly by as much as 30 to 50%, according to Michael Strain, an economist at the American Enterprise Institute. Conservative economists also believe that the fast-food industry is likely to cut jobs if it is forced to raise wages, and given that the industry employs some three and half million people, it’s easy to see Strain’s point.

Strain says that he doesn’t see fast-food workers’ reliance on public assistance as a bad thing. “In general, the government is making sure these peoples’ basic needs are met, which is an appropriate role of government.”

Meanwhile, other economists argue that the fast-food industry’s revenues leave plenty of room for a wage increase. “McDonald’s profits were $5.6 billion last year,” said Jack Temple, an economist at the National Employment Law Project. “There’s plenty of revenue to afford a living wage.”

Ken Jacobs, one of the authors of the UC Berkeley study, agrees. He adds that raising wages also helps reduce worker turnover, which is good for the company as well as the workers. What the companies lose in profits by raising wages they can potentially gain in cost-savings by keeping their workers longer.

Ruetschlin says that raising fast-food workers wages won’t just allow working families to maintain a better quality of living without having to rely on public assistance, but could also help improve fast-food companies’ bottom line. “Reducing the proportion of CEO-to-worker compensation by addressing bad practices on both halves of the ratio is one step toward realigning the interests of stakeholders in the firm, including shareholders, executives, and the workforce overall.”

McDonald’s, for one, has begun to take notice of the risk associated with pay disparity. In a January SEC filing, the company listed protests by its low wage workers, increasing awareness of income inequality, and public perception of working conditions at the company’s franchises among the risks to shareholders in the upcoming year. Further, in June of 2014, McDonald’s CEO Don Thompson suggested in a speech at Northwestern University’s Kellogg School of Management that he supports a minimum wage increase. “We will support any legislation that moves forward,” Thompson said, per the Chicago Tribune adding that “McDonald’s will be fine. We’ll manage through whatever additional cost implications there are.” “Managing” certainly sounds better than what most of the companies front-line workers are doing.