If busy weeknights have you resorting to the same bland meals, then it’s time for a recipe intervention. Even a time-crunched schedule has room for some truly delicious dinners when you use a few secret ingredients. These seven recipes look to boldly flavored components like vinegar, fruit, herbs, and spices to help you get the most out of your meals. Whip one up for dinner tonight, and you’ll be dining in no time.

If you’ve never made a paillard before, then say hello to your new favorite chicken dish. These cutlets get pounded thin, so they cook more evenly, and a lot faster, than a whole breast. This version from The Chew’s Daphne Oz pairs the protein with a sweet and savory pineapple and radicchio salad. You’ll be amazed at how much flavor this meal packs in so little time.

For the fastest preparation, start by whisking the dressing together. Then grill the pineapple and prep all the salad ingredients, but leave them in the bowl, undressed. Next, pound the chicken, season, and cook it on the same grill used for the fruit. Toss the salad with the dressing while you let the chicken rest for a few minutes, and dinner is served.

Directions: Preheat a grill or grill pan to medium heat. Whisk lemon juice, parsley, mustard, and a drizzle of olive oil in a large mixing bowl. Season with salt and pepper. Set aside.

Place pineapples spears on grill, and cook 2 to 3 minutes, until grill marks form on both sides. Remove from heat, and cut into bite-size pieces.

Season chicken with salt and pepper, and drizzle with the ¼ cup olive oil. Grill chicken until cooked, about 3 to 4 minutes per side.

Toss pineapple, radicchio, carrots, and mint with dressing to coat. Serve with chicken.

This gazpacho from Ina Garten, featured on Food Network, can be ready in just 20 minutes without ever heating up a pot. Just chop the veggies, pulse in the food processor, then add to a large bowl with olive oil, vinegar, and some tomato juice. Add a few slices of bread on the side, and you’re ready to dig in.

If you know you’ll be getting home from work late, go ahead and throw the soup together in the morning. This is a dish that actually gets better as it sits, so there’s no need to worry about letting it hang out in the fridge all day. Make sure to taste and readjust the seasoning before you serve.

Combine all vegetables in a large bowl with garlic, tomato juice, vinegar, olive oil, salt, and pepper. Mix, and chill. Taste, and adjust seasonings before serving.

Protein-packed shrimp are a weeknight wonder thanks to a super short cooking time. This easy curry from Steamy Kitchen lets the seafood shine in a spicy coconut milk sauce filled with mushrooms and peppers. Since this dish cooks in 10 minutes, you’ll either want to get a head start on some rice or use something quicker. Couscous makes a great bed to soak up the sauce, but you can also buy pre-cooked, frozen rice that just takes a quick zap in the microwave. It’s available in both white and brown varieties, so choose whichever you prefer. 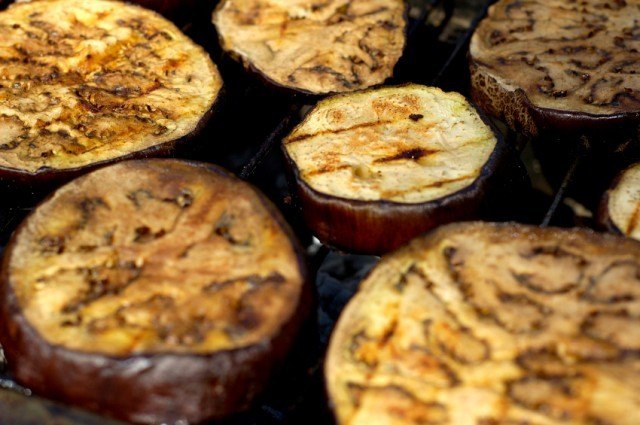 These vegetarian sandwiches from Food & Wine are a satisfying, but fresher way to cure a craving for eggplant Parmesan. Grill up some bread, just until the edges get a little bit of char. Next, cook the eggplant until it gets some nice marks, flip, top with mozzarella and tomatoes, then cover to let the cheese melt. Transfer the veggies to the toast for dinner in a flash.

While any mozzarella will work for this recipe, use buffalo if you can find it. What’s the difference? It’s actually made from buffalo milk, and is both creamier and more flavorful. Since this recipe is pretty minimal, getting good ingredients is the key to making it taste phenomenal.

Directions: Heat a grill. Brush bread with olive oil on both sides, and grill until crisped on outside, but soft inside, about 30 seconds per side. Remove and set aside.

Brush eggplant with olive oil, and season with salt and pepper. Grill over moderate heat until marks form on bottom, about 5 minutes. Turn eggplant over, and cook 3 minutes, until tender. Top with tomato, mozzarella, and basil. Cover, and cook until cheese is melted, about 2 minutes. Transfer eggplant to toast. Season with sea salt, and serve. 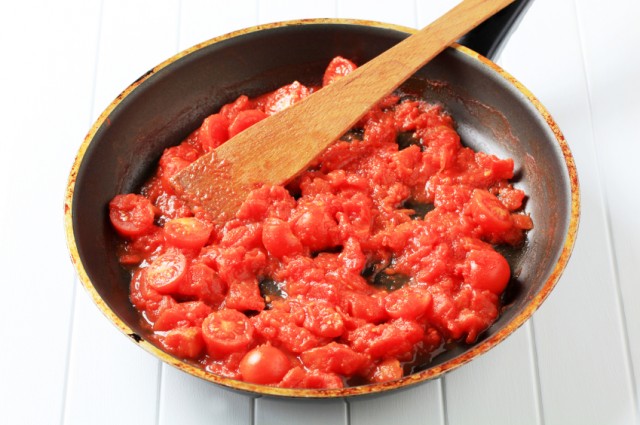 Figuring out what sides to serve with dinner can be more difficult than nailing down what to make for the main course. This all-in-one recipe from Epicurious takes care of the whole planning process, so you can get out of the kitchen that much faster. Start with the polenta, then stuff and broil the pork chops. Give the polenta a stir every so often as you work. Once the chops are in the oven, you can quickly cook up some tomatoes with a bit of broth and garlic. Everything will be ready to go as soon as the pork is finished. All that’s left to do is decide what beverage to pair with this lovely supper.

Directions: Preheat broiler to high, and set oven racks 4 inches away from heat. Line broiler pan or baking sheet with foil. In a medium saucepan, prepare polenta according to package directions.

While polenta cooks, place chops on cutting board, and make a horizontal slit, 3 to 4 inches deep and 3 to 4 inches long in side of each. Spread each mozzarella slice with 1 teaspoon anchovy paste, and stuff inside of each chop. Press pork to seal, and secure with a toothpick. Rub chops with 1 tablespoon oil, and season with 1 teaspoon salt and ½ teaspoon pepper. Place on prepared pan. Broil until cooked through, about 5 minutes on each side.

Once polenta is cooked, whisk in milk. Season with salt, to taste. Serve polenta with pork, and tomatoes. Garnish with parsley.

6. Fusili with Italian Sausage and Arugula

A little bit of turkey sausage gives Eating Well’s fast pasta dinner tons of flavor while plenty of greens and tomatoes give it some serious nutrition. Greens like kale and spinach get tons of attention, but arugula’s no slacker either. It’s filled with calcium, vitamins, and even some iron, so load up on the peppery green.

For this dish, cook the sausage while the pasta boils. Add the greens and tomatoes to the sausage and cook just to wilt a bit, then make a fast sauce by whisking some of the pasta water in a bowl with some cheese and black pepper. Add the pasta to the sauce and top off with the veggies and sausage for a meal that’s creamy, spicy, and completely healthy.

Directions: Bring large pot of water to a boil. Cook pasta 8 to 10 minutes, or according to package. Meanwhile, cook sausage in large nonstick skillet over medium-high heat, breaking with a wooden spoon, until fully cooked, 2 to 4 minutes. Add garlic, arugula, and tomatoes. Cook just until greens begin to wilt, 1 to 2 minutes. Remove from heat, and keep warm.

Combine cheese, pepper, and salt in a large bowl. Add 2 tablespoons of pasta water, then drain pasta. Whisk liquid into cheese, and mix in pasta. Top pasta with arugula mixture, and serve. 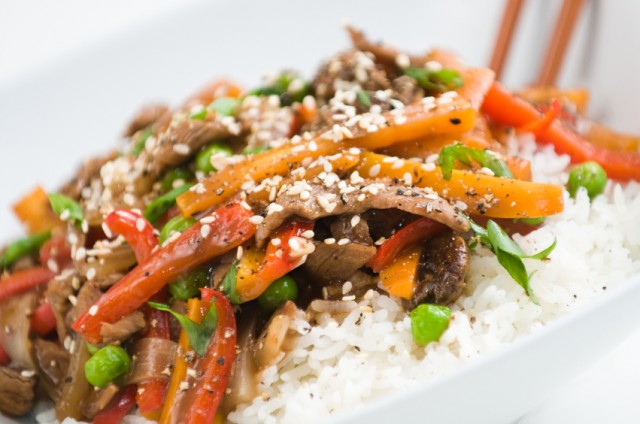 One of the best ways to build flavor really fast is to make a bold marinade. Baker by Nature’s speedy stir-fry shows how it’s done by whisking together some soy sauce, balsamic vinegar, spicy chile sauce, and brown sugar. After sautéing some veggies, cook the meat, then reduce the leftover marinade into a tasty sauce. Serve this dish with any of your favorite grains to round out the meal.

Directions: Combine all marinade ingredients in a small bowl. Whisk to combine, and pour into a large plastic food storage bag along with steak. Seal and roll around to coat. Refrigerate at least 10 minutes.

Add butter to skillet, then drain steak from marinade and add half of meat to pan. Cook about 4 minutes, until browned, stirring occasionally. Transfer to plate with vegetables, and repeat with remaining steak. Add remaining sesame oil and reserved marinade to skillet, and cook until thickened, about 1 minute. Return meat and veggies to pan, and add spinach. Stir to combine, and cook, just until spinach wilts. Serve with rice or grains.