It probably comes as no surprise that Americans love spuds. What’s a little more shocking is just how far that affection goes. According to the Idaho Potato Museum, we each eat about 124 pounds of potatoes every year. They’re delicious mashed, baked, and fried. As much as we love them, they never seem to get any airtime as an entrée. These six recipes show you how to morph the beloved vegetable into meals you’ll want to make again and again — no ketchup required. 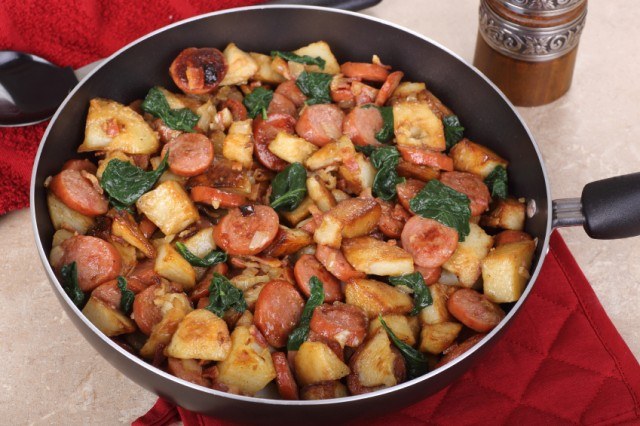 Impatient cooks might snub potatoes because of their long cook time. Waiting for a pot of water to boil and then simmering the tubers can take what seems like an eternity. That’s hardly a recipe for weeknight success. This hearty skillet from Taste of Home gets a serious speed boost by cooking the potatoes in the microwave first. After a few minutes, they’re perfectly tender and ready to head into the pan with some sausage, seasonings, a bit of bacon, and spinach. You’ll have 4 generous servings in just 30 minutes.

Directions: Place potatoes and water in a microwave-safe dish. Cover and microwave on high for 4 minutes, or until tender. Drain.

Combine brown sugar, vinegar, mustard, thyme, and pepper. Add mixture to skillet. Bring to a boil, then reduce. Cover and simmer for 2 to 3 minutes, until heated through. Add spinach and bacon, and stir until spinach wilts. Serve. 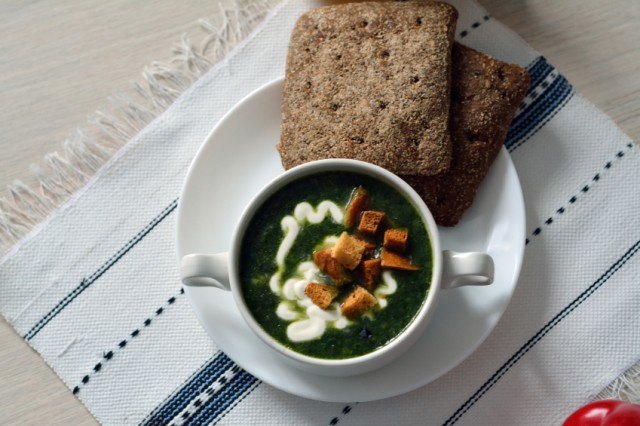 Potato soup probably brings to mind a gloppy concoction topped with bacon, cheese, and sour cream. Although those versions are tasty, they’re pretty heavy for the warmer months of the year. Show off the lighter side of potatoes with Food52’s vibrant soup. It tastes fresh enough for spring and summer, but still fills you up.

Start by sweating some spring onion bulbs until soft, then stir in cubed potatoes and water. Cook until the spuds are soft, then add the green onion tops, wilt, then purée. Top each serving with a drizzle of cream and some cheesy croutons for the perfect finishing touches.

Directions: Preheat oven to 350 degrees Fahrenheit, and arrange rack in middle of oven. Cut bread into ¾-inch cubes and place in a large bowl. Peel and smash the garlic and add to a small saucepan with the olive oil. Heat over medium heat for a few minutes, then strain into bowl with bread. Add salt, to taste, and toss to coat.

Chop potatoes into large chunks, then add to pot along with water, ¼ teaspoon more salt, and a pinch of pepper. Cover pot and simmer until potatoes are very tender, about 20 minutes.

Coarsely chop reserved green tops, then add to soup. Remove pot from heat, cover, and let stand 5 to 10 minutes, until greens soften. Season with salt and pepper, to taste.

Working in batches, purée the soup in a blender, or use an immersion blender. Serve soup topped with a drizzle of cream and a sprinkle of croutons.

If you tend to get your dumpling fix from gyoza or ravioli, it might be time to change things up with a Polish version of the little savory pockets. Though food from this area of Europe has a reputation for being bland, these pierogies from Fig and Honey pack plenty of flavor with some sweet peas and a sprinkle of curry for some mellow spice.

Though you can mash up some potatoes specifically for this dish, it’s also a great way to use up leftovers from Sunday’s dinner. To make things even easier, you can skip the dough recipe and sub in some packaged wonton wrappers. Once cooked, give them a quick sauté for a delightfully crisp exterior.

Directions: In a large bowl, combine flour and salt. Form a well in center. In another bowl, mix milk, water, sour cream, egg, and egg yolks to combine. Add wet ingredients to center of dry ingredients, and slowly mix to incorporate. Transfer to a lightly floured surface, and knead for 10 minutes, until dough is smooth. Divide into six pieces, cover and let rest.

Heat oil in a shallow frying pan over medium heat. Add onion, and cook until translucent. Add peas, potatoes, and curry powder. Continue to cook until heated through, 7 to 10 minutes. Add cheddar, stir to combine. Remove from heat and let cool.

On a floured surface, roll out one dough ball at a time to ¼-inch thickness. Cut dough with 3-inch circle cutter. Fill each round with a tablespoon of filling. Fold over, and pinch edges to seal. You may need to add a bit of water to get edges to seal completely. Repeat with remaining dough and filling.

In a large pot of salted boiling water, cook pierogi in batches, 5 to 8 minutes, until they float to the top. Remove from water. Eat as is, or quickly sauté in oil for a crispy dumpling.

4. Twice-Baked Potatoes with Kale and Bacon 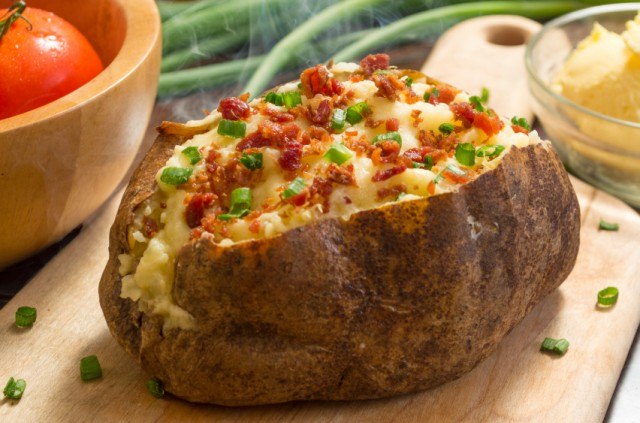 Whoever decided twice-baked potatoes are a great side for steak must have been a very hungry person, because the stuffed spuds are more than capable of serving as a main dish. This version from Fine Cooking features kale, bacon, and a sprinkle of cheese for a seriously delicious dinner. They’re hearty enough to stand alone, but a simple green salad alongside also rounds out the meal nicely.

Directions: Position rack in center of oven and preheat to 400 degrees Fahrenheit. Place potatoes directly on rack and bake until easily pierced with a fork, about 1 hour 10 minutes. Transfer potatoes to cutting board. Let cool 10 minutes.

Cut a ½-inch-thick slice lengthwise off top of each potato. Scrape flesh from slices into a large bowl and discard skins. Spoon flesh from potatoes into bowl, leaving a ¼-inch-thick shell. Add butter, ¾ teaspoon salt, and ½ teaspoon black pepper to potatoes. Mash until blended, leaving some lumps. Fold in kale mixture, sour cream, and half of cheese. Season with salt and pepper, to taste.

Rub outsides of potatoes with oil. Distribute filling among shells, mounding at the top. Place potatoes on rimmed baking sheet and bake, 25 to 30 minutes, until hot throughout. Sprinkle with remaining cheese, and bake until cheese browns and bubbles, 2 to 3 minutes. Garnish with chives. Let sit 5 to 10 minutes. Serve. 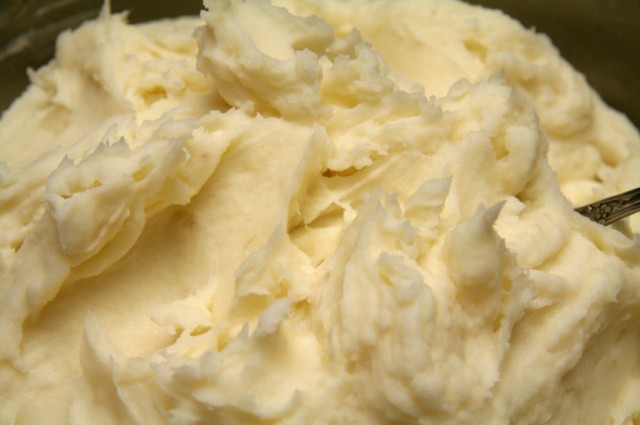 It’s not all pasta and bread in Italy. When potatoes arrived, peasants adopted the produce with open arms to create some great dishes. Many people are already familiar with gnocchi, but it’s time for gatto to get a little more love. This potato cake from Mario Batali, featured on Food Network, demonstrates just how easy it is to turn a humble ingredient into something spectacular. Just mash cooked potatoes, add some cheese, eggs, and salami. Spread the mixture into a pan, then bake. It’s simple, and completely delicious.

Directions: Preheat oven to 450 degrees Fahrenheit. Fill a large pot with water, and add whole potatoes. Bring to a boil, and cook until tender, about 45 minutes. Drain and peel potatoes. Pass through a food mill or a ricer. While warm, add to a mixing bowl with eggs, cheeses, soppressata, milk, and parsley. Mix just to combine.

Bake 25 to 30 minutes, until lightly golden on top. Remove from oven, and let stand 15 minutes. Unmold, cut into wedges, and serve.

6. Pizza with Parsley Pesto and Potatoes 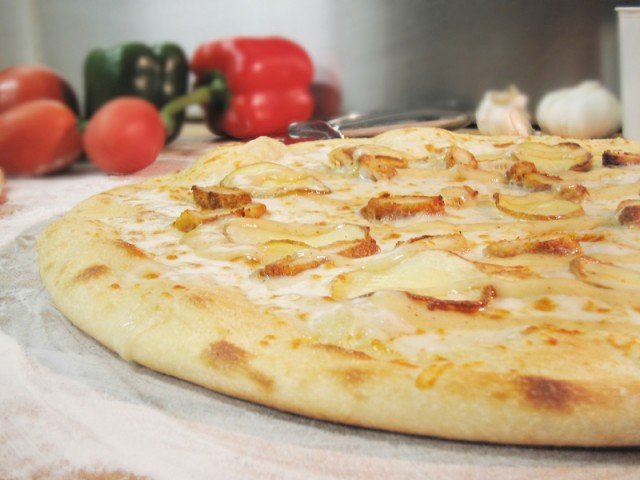 Pizza with pesto and potatoes | iStock.com

Potatoes on top of pizza might sound like overkill, but this parsley pesto version from Food & Wine is surprisingly delicate. It’s also insanely easy. The homemade pesto comes together in minutes, thanks to the food processor. Just roll out the dough, top with cooked potato slices, drizzle with the pesto, and top with some shredded cheese. When pizza is this easy, takeout could become a thing of the past.

In a food processor, pulse parsley, nuts, garlic, and ½ teaspoon salt until finely chopped. With machine running, add oil in a slow stream until smooth.

Increase oven temperature to 500 degrees Fahrenheit. Roll one-quarter of dough into an 8-inch round. Place dough on floured pizza peel, arrange one-fourth of potatoes on top, leaving a ½-inch border. Drizzle with one-quarter of pesto, then sprinkle with one-quarter of each cheese. Slice onto stone and bake, about 8 minutes, until cheese is bubbling and crust is golden and crisp. Repeat with remaining ingredients. Serve.