Superfoods are simply foods with more nutritional value than most other foods. Vitamins and minerals are necessary for a functioning, healthy body, and antioxidants do all kinds of good things like fight cancer. The CDC recently released a report scoring the nutrient density scores of 41 nutrient “powerhouses,” though it’s not a full list of all the great-for-you foods out there because only certain food families were studied. For the most part, superfoods are not especially hard to obtain from your local grocery store, and it’s really pretty easy to replace various foods in your diet with healthier ingredients.

With all the hype around superfoods these days, though, it can be a bit of a consumer trap. For example, as Live Science points out, drinking green tea gives you a dose of healthy antioxidants, but all the sugar found in commercially produced green tea beverages basically negates the positive effects. If you’re going to drink green tea for the nutritional benefits, make it yourself and don’t put sugar in it. This goes for the “superfood rich” juices and shakes you’d buy in the store, too. The foods don’t have to be exotic to be good for you; red raspberries have the same cancer-fighting nutrient that pomegranates do. Don’t jump on board the juicing train thinking it’s a way to cheat the system, either: Fiber is one of the body’s essential nutrients, and it’s what’s being left behind when you juice. Because fiber helps regulate blood glucose levels and juicing leaves you with all of the sugar and none of the fiber, a glass of juice will throw you into a blood sugar tailspin.

If you’re ready to starting working more superfoods into your diet, these 5 recipes are here to help. Read on! 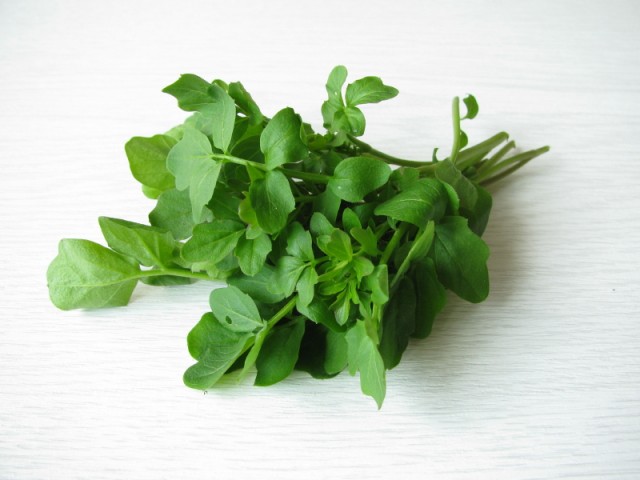 Watercress came in at the top of the list for the CDC’s powerhouse fruits and vegetable scoring list, clocking in at a perfect 100. This wispy-looking green contains four times the beta carotene as an apple, more than 230% of your daily vitamin K, more vitamin C than an orange, more calcium than milk, more iron than spinach, and is one of the richest sources of phenethyl isothiocyanate, which may “turn off” the breast cancer signal, according to a University of Southampton study. This is the compound that makes watercress peppery, and it is most active when consumed raw. This Avocado and Watercress Salad from Gourmet via Epicurious isn’t just tasty, but, between the watercress and cholesterol-lowering avocado, may just be a life saver.

Directions: Stir together vinegar, onion, apple, soy sauce, and sugar until sugar has dissolved, then stir in oil.

Kiwis are one of the healthiest fruits around. One good-sized kiwi can provide your daily requirement of vitamin C as well as vitamins A and E — one of the ingredients that we need but our bodies can’t produce, according to WebMD. Like the bananas included in this dish, kiwis are also high in both fiber and potassium.

Eat this dish from Eating Well as a salad on its own for lunch, a snack to replace normal tomato salsa with baked tortilla chips, or make it to top brown rice and grilled chicken in a citrus marinade for a burrito bowl.

This salad could be a light meal in itself. Replacing a grain like rice or even farro with quinoa packs it with protein, fiber, and iron, as well as zinc, vitamin E, and selenium. The combination of nutrients in the quinoa alone are going to help you control your weight and lower your risk for heart disease and diabetes, says WebMD. Add in the pomegranates, full of B5 that helps you actually metabolize the protein in the quinoa, and plenty of the antioxidant punicalagin and the fennel, and mineral-rich fennel, and this meal from Bon Appétit is seriously good for you.

While the fennel is cooking, bring quinoa and 3 cups water to a boil in a medium saucepan. Cover, reduce heat to low, and simmer until quinoa is cooked, about 10 minutes. Drain and return to pan. Cover and let sit for 15 minutes. Fluff with a fork; transfer to a large bowl.

Using a small sharp knife, cut all peel and white pith from lemon. Cut between membranes to release segments; discard membranes and roughly chop. Add lemon with any juices and remaining 1 tablespoon oil to quinoa; stir. Add fennel mixture, chile, and herbs. Toss gently to incorporate. Season with salt and pepper. Transfer salad to a platter; sprinkle with pomegranate seeds.

Broccoli gets a bad rap for being the vegetable no one likes. It’s really too bad if that’s the case, because it’s really just so good for you. It’s a rich source of Vitamins A, C, and K. Beta carotene (which the body converts into vitamin A) is sneaky here — famous for being an orange-vegetable mineral, it’s abundant in deep green broccoli. Beans, too, are great for you: A very lean protein, they’re packed with insoluble fiber to lower your cholesterol and soluble fiber to move waste through your system, according to WebMD’s list of superfoods. Don’t shy away from frozen broccoli here in this recipe from Cooking Light via My Recipes: Not only will it save you precious time, but flash-frozen foods are often healthier in the off-season than the fresh version, retaining more nutrients from farm to store.

Directions: Cook broccoli in boiling water for 3 minutes or until crisp-tender. Drain and rinse with cold water.

While broccoli cooks, heat oil in a large nonstick skillet over medium heat. Add garlic, and cook 5 minutes or until golden, stirring frequently. Remove garlic with a slotted spoon; drain on paper towels. Pour excess oil from pan into a small bowl. Add lemon juice, dill, salt, and pepper; stir with a whisk.

Don’t just fill your quesadillas with cheese and meat. These replace the majority of heavy, fattening cheese with sweet potatoes and spinach, transforming the quesadillas into iron-rich, beta-carotene heavy flavor bombs. Between the small amount of cheese and the spinach, Health Magazine reports that their recipe contains more calcium than a glass of milk. To increase your whole-grain intake, use whole-wheat tortillas in place of the white flour ones called for. For an even higher nutrient dense meal as scored by the CDC report, replace the sweet potato with pumpkin and the spinach with chard!

Directions: Microwave potatoes on high until tender, about 15 minutes, on a microwave-safe plate.

Meanwhile, in a medium saucepan, combine vinegar, sugar, and peppercorns; bring to a boil and stir to dissolve sugar. Place onion slices in a medium heatproof bowl; pour hot vinegar mixture over onion and let stand 10 minutes. Drain onion slices and transfer to a plate to cool.

Split cooked potatoes open with a knife; remove flesh and transfer to a bowl. Use a fork to mash potato with salt and pepper; divide potato filling among 4 tortillas. Top each with 1 heaping cup spinach, ¼ cup cheese, and another tortilla.

Heat a large nonstick skillet over medium-high heat. Working in batches, heat 1 teaspoon oil and transfer 1 quesadilla to skillet; cook until quesadilla is crisp and cheese is melted, about 3 minutes per side. Transfer cooked quesadilla to serving plate. Repeat with remaining oil and quesadillas. Cut quesadillas in quarters and serve each with ¼ cup pickled onions. Feel free to make some cholesterol fighting guacamole to go on the side, too!