Easy Breakfast Recipes You Can Cook in a Crockpot

Most mornings are so hectic, ingesting anything more than a cup of coffee feels like a victory. Smoothies and shakes come together quickly enough to make it happen, but sometimes you really need a hot breakfast to get going. Instead of losing your much needed sleep to make something hearty, enlist your slow cooker to take care of breakfast. These six breakfast recipes show you how.

While not all of these dishes are designed to cook overnight, they’re still great to have in your repertoire for weekends when you have errands to run in the morning. Invite friends over to share in the feast or save the leftovers to reheat during the week. 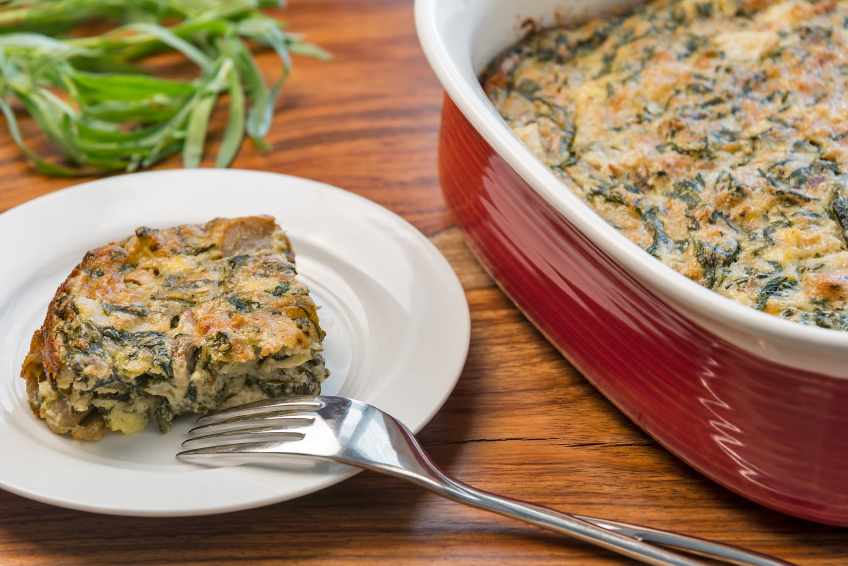 Eggs Florentine is almost the perfect breakfast food thanks to the starring protein, fiber-packed spinach, and calcium-rich cheese. Most versions of the dish also require a lot of time over the stove. Get the great taste and nutrition in an easier package with this overnight egg bake from My Clean Kitchen. You’ll have to do a little bit of prep work before hitting the sack, but then the crockpot does the rest of the work while you dream.

This recipe is already pretty easy, but you can speed it up even more if you opt for prepared sausage instead of making your own. Just be sure to use a raw product so it doesn’t dry out too much.

Directions: In a medium bowl, use your hands to mix turkey or pork with sage, rosemary, thyme, red pepper flakes, syrup, salt, and pepper until just combined. Cook sausage mixture in a large skillet over medium-high heat until browned. Remove from skillet and transfer to the bottom of a slow cooker.

Whisk eggs in a large bowl to combine. Season with salt and pepper, then pour into slow cooker. Cover and cook on low for 8 hours. Serve.

Overnight french toast is a great way to make the traditional recipe easier, but you still have to wait an hour or so for the casserole to bake before digging in. By transferring the dish to a slow cooker, you can have a hot plate of the custard-like breakfast any day of the week. We particularly like this decadent French toast from The Naptime Chef. With just nine ingredients and a few minutes of assembly, breakfast will be taken care of before you turn out the lights.

If you’re making this recipe on a weekend, try whipping up a spiked topping to serve alongside. Just heat some maple syrup over the stove with a splash of bourbon or amaretto.

Directions: Lightly grease the insert of a slow cooker with cooking spray. Layer bread in slow cooker, overlapping as needed.

Whisk all remaining ingredients in a large bowl to combine. Pour evenly over bread, pressing bread to submerge. Cover and cook on low for 8 hours. Allow to cool slightly, then serve. 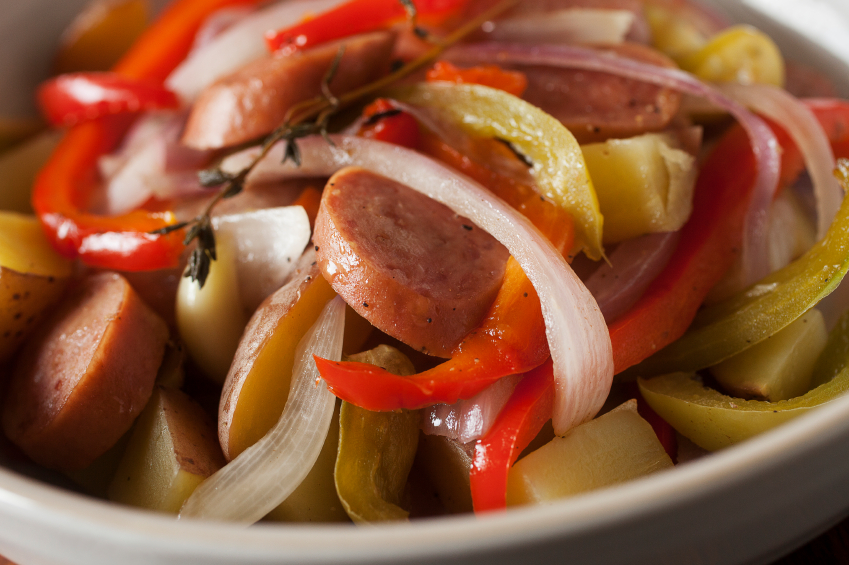 Sausages with potatoes and peppers | iStock.com

One of our favorite features of the trusty crockpot is the ability to cook a meal on high or low settings to suit your schedule. This hash with chicken sausage and peppers from Better Homes and Gardens is a great example. You can opt to cook the dish in 3 or 6 hours, and the results are the same either way. Make a batch on Sunday, then just pop leftovers in the microwave to reheat for a quick breakfast during the week.

Coat the bottom of a 3½- or 4-quart slow cooker with cooking spray. Add sausage, onion, potatoes, thyme, and pepper to prepared slow cooker. Add broth. Cover and cook on low for 5 to 6 hours or on high for 2½ to 3 hours. Stir in peppers and sprinkle with cheese, if using.

Turn cooker to high setting, cover, and cook for 15 minutes longer. Sprinkle with tarragon or parsley and serve. 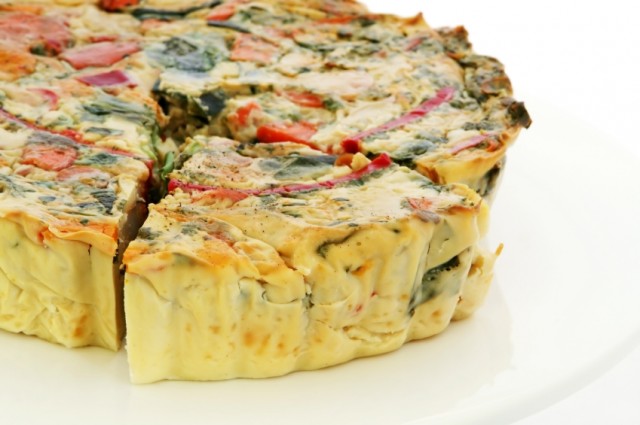 Thanks to this slow cooker quiche with veggies and ham from A Spicy Perspective, making the egg dish is easier than ever. Just lay the crusts on some parchment, fit them into the insert, add the egg mixture, and let it cook for 3 to 4 hours. When you’re ready to eat, use the parchment to lift the whole quiche out so you don’t end up scratching the insert as you slice.

Directions: Cook onions, bell peppers, and garlic with a drizzle of oil in a small nonstick skillet until beginning to soften, about 3 to 5 minutes. Remove from heat and set aside.

Set an 18-inch-long piece of parchment paper on a work surface. Place pie dough on top, overlapping in center to create one 17- to 18-inch crust. Press overlapping portion to seal, then transfer crust and parchment to a slow cooker, parchment-side down. Press crust against sides to create a 2½- to 3-inch deep crust.

Whisk eggs cream, mustard, and salt to combine. Add some black pepper. Stir in vegetables, ham, and cheese. Pour into prepared crust, top with a long piece of paper towel to catch excess moisture as it cooks, then add lid. Cook on high for 3 to 4 hours, or until crust is brown around the edges and the quiche is fully set. Use parchment to lift quiche out of slow cooker, cool for 10 minutes, slice, and serve.

Huevos rancheros will never be a speedy meal, but you can at least make it low maintenance with this crockpot twist from Southern Living. If you don’t want to bother turning on the oven to crisp tortillas prior to serving, just use a handful of tortilla chips. Save any leftover bean, sausage, and egg mixture to make quick burritos.

Directions: Brown sausage in a large skillet set over medium-high heat, stirring until meat is broken up and no longer pink. Remove from skillet, reserving drippings. Transfer sausage to a 6-quart slow cooker. Cook bell peppers and onions in drippings over medium-high heat for 2 minutes. Stir in tomatoes, beans, cumin, and oregano. Pour over sausage.

Tear four tortillas into pieces and stir in to bean mixture. Cover and cook on high for 3 hours.

Create six indentations in bean mixture using a spoon. Working one at a time, crack eggs into a measuring cup, and slice one into each indentation. Cover and cook 20 to 30 minutes longer, or until eggs are cooked to your liking. Uncover and sprinkle with cheese. Turn off slow cooker, cover, and let stand for 5 minutes.

Meanwhile, preheat oven to 450 degrees Fahrenheit. Arrange remaining tortillas on a large baking sheet and coat both sides of each with cooking spray. Bake for 10 to 11 minutes. Stir pico de gallo, chopped cilantro, and hot sauce to combine.

Top each tortilla with bean mixture, an egg, and some pico de gallo sauce. Serve garnished with cilantro sprigs. 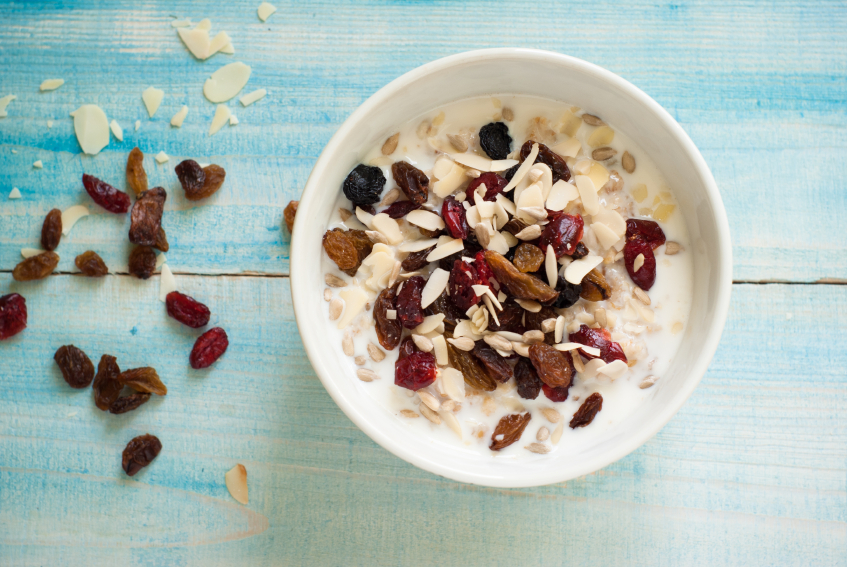 Perhaps the ultimate slow cooker breakfast, this hearty oatmeal with figs and cranberries from Food Network’s Alton Brown is designed to bubble away while you sleep for a full 8 to 9 hours. The slow cooking helps the sweet fruit infuse into every bite for a truly delicious breakfast. We like to serve this recipe with a sprinkle of toasted almonds for a little bit of crunch.

Directions: In a slow cooker, combine all ingredients. Cover and cook on low for 8 to 9 hours. Stir oatmeal and divide among bowls. Serve.