If you’re serious about pizza, it may seem impossible to create really good pizza at home. While there’s definitely a ceiling to what you can do without a coal- or wood-fired stone pizza oven that gets up to 1,000 degrees Fahrenheit, the goal of beating your local delivery joint in a pizza battle is definitely obtainable. This article runs through the best home cook practices of making the dough, making the sauce, shaping the dough, topping the pizza, and cooking the pizza. Gone are the days of pizza crusts you pop out of a can and roll into a rectangle on a baking sheet. Here are the days of impressive homemade pizza nights.

It should be noted that pizza styles and preferences obviously vary wildly. Here, we’re focusing on the New York Neapolitan-type pie (those in the know should think Roberta’s, not Two Boots). We’re looking for a doughy, chewy crust rolled thin, with a good lip and really great sauce. We’re looking for dark spots on both the top and bottom, and a little less greasy than a standard two-napkin N.Y. pie. We’ll break tradition, though, and discuss topping combinations beyond just a few circles of mozzarella cheese. Live a little. 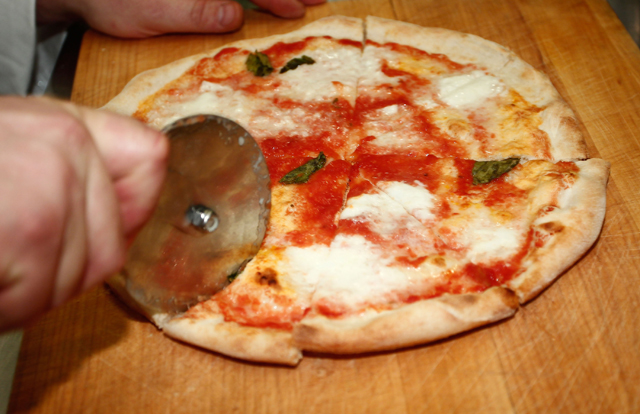 The longer you allow the dough to rise — slowly, preferably — the more flavor you’re extracting from the flour as the yeast slowly eats its way through the sugars. To make the idea of starting your dough the night before more appealing, we’ll cut all the kneading from the equation with Jim Lahey’s no-knead pizza dough. Coming from Epicurious, this recipe calls for enough flour to make six 12-inch pizzas. That’s a lot of pizza, so we’ve halved it. If you’re having a pizza party, bring it back to the full recipe.

Note that this recipe calls for an 18-hour rise. This is, for most people, not the right number of hours: Your life is going to get in the way. It’s OK. More rise time is great. If you let the dough rise for a couple of more hours, especially in a slightly cooler area of your house (not cold!), nothing bad will happen.

Directions: Whisk flour, salt, and yeast in a medium bowl. While stirring with a wooden spoon, gradually add water; stir until well incorporated. Mix dough gently with your hands to bring it together and form into a rough ball. Transfer to a large, clean bowl. Cover with plastic wrap and let dough rise at room temperature in a draft-free area until surface is covered with tiny bubbles and dough has more than doubled in size, about 18 hours.

Transfer dough to a floured work surface. Gently shape into a rough rectangle. Divide into three equal portions. Working with one portion at a time, gather four corners to center to create four folds. Turn seam side down and mold gently into a ball. Dust dough with flour; set aside on work surface or a floured baking sheet. Repeat with remaining portions.

Let dough rest, covered with plastic wrap or a damp kitchen towel, until soft and pliable, about 1 hour, before shaping your pizzas.

The best pizza sauce is made from good-quality canned tomatoes and — get ready — isn’t cooked. Seriously. No bubbling pots of sauce on the stove to bother with, just a colander and a blender. It’s the secret to what you’ve been doing wrong with your pizza sauce. Ever wonder why yours doesn’t taste like the joint’s down on the corner? You’ve probably either been using jarred pasta sauce or you’ve been cooking your pizza sauce. Stop that, and do this instead.

This recipe comes from Deb Perelman of Smitten Kitchen when she had the uncooked sauce epiphany. One of the secrets we’ll get to later is to not use too much sauce on your pizza. This will make enough to cover your pizzas in sauce like a pro. If you really, really want extra sauce on your pizzas, though, double the recipe.

Directions: Strain the tomatoes in a colander set over a bowl, gently squeezing to drain more liquid. Reserve accumulated juice for another use.

Add remaining ingredients to the tomatoes and transfer to a blender. Blend until mostly smooth. If needed, add a pinch of sugar.

The dough will be wet and shaggy, and that’s good. It’s not going to be the easiest to work with, but that’s OK. Go with it. Don’t add too much flour when you’re shaping, or your pizza crust will be tough rather than doughy. If you need to, wet rather than flour your hands to keep the dough from adhering. Remember, hydration is the key to a chewy pizza crust, and flour is thirsty and greedy.

Roberta’s is one of those places that people will leave their neighborhoods in New York City for, and that doesn’t happen often. In its cookbook, available straight from the restaurant’s website or from Amazon, it describes how to best shape a pizza. Basically, you want to gently stretch by letting gravity pull it as you move it around with your hands rather than pulling or stretching. Roberta’s also has a rule for making pizza at home: Don’t try to make the dough paper-thin. This works for pizza ovens that get up to 900 degrees Fahrenheit, but at home, you’ll just make a dry pizza cracker. The restaurant recommends going no thinner than ⅛ of an inch. And don’t worry if it’s not a perfect circle. 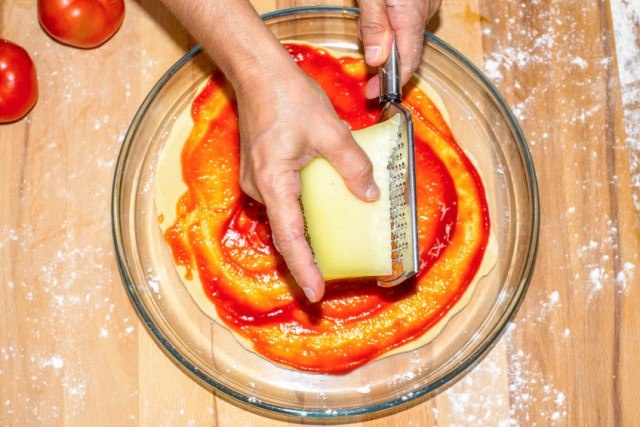 Don’t use too much sauce. Seriously. Even though you drained the tomatoes, it will make your pizza too wet, and no one wants a soggy pizza. This applies to cheese, too: Choose a lower-moisture mozzarella, because a wet, succulent one for caprese will swamp up your pizza. Serious Eats recommends grating your own, because pre-grated cheese is often coated with cornstarch or another powder to keep the cheese from sticking together in the bag. This can prevent your cheese from melting properly.

Balance and restraint. Making a gourmet pizza is all about balance and restraint.  If you study the famous old-school pizzas of New York, you can see patches of dough beneath the sauce and the cheese. Don’t smother the dough you worked so hard to perfect! This also means don’t go over the top with your toppings.

For a truly gourmet pizza, you don’t need caviar or ridiculously intricate toppings. You just need something fresh that you’d be happy to eat on its own so that it can shine in its simplicity. That’s the name of the game these days: great ingredients, presented simply.

A general heuristic to follow is to use culinary opposites such as salty and sweet, and bitter and fatty. 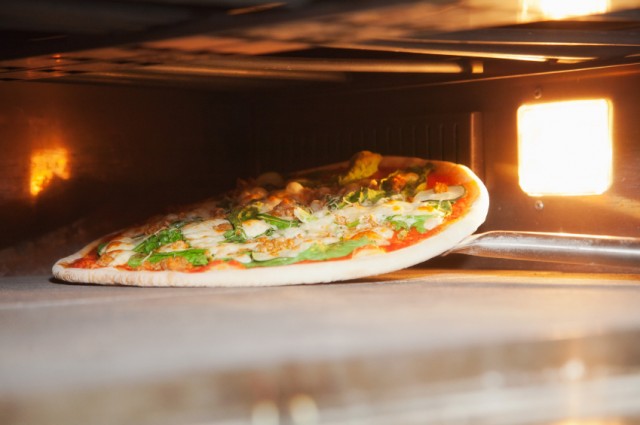 Make it hot, keep it hot. Your oven should get up to at least 500 degrees Fahrenheit; don’t cook your pizza at a lower temperature than the hottest you can get your oven. Remember that pizza places have ovens that get to a minimum of 800 degrees Fahrenheit. Cooking hot and fast means that your crust won’t dry out as it browns.

You need to get the bottom crust to cook as the top of the pizza cooks, which means a hot surface to rest the pizza on. Don’t just slide a pizza on parchment straight onto the rack, because the bottom won’t cook. Definitely don’t slide it in on a cold sheet pan. Here are your options:

Good enough: Heat a sheet pan, top down, in the oven and slide the pizza in when it’s ripping hot. It’s better than nothing, but the thin metal doesn’t hold heat well enough to cook the bottom.

Better: A pizza stone, or better yet (and recommended by Roberta’s), four unglazed quarry tiles from Home Depot. The stone will hold heat well throughout the cooking process, mottling the bottom crust with browning. Heat your stone with the oven — never put a cold stone into a hot oven, because it will crack.

Best: If you’re serious about good pizza and you make pizza often, get yourself a baking steel. It’s the best at holding and conducting heat, as explained by The Food Lab at Serious Eats.

Whether you have a stone or a steel, they should be allowed to heat up at maximum temperature for 45 minutes to an hour on a rack in the top third of the oven, but not right up against the heating element.

When the oven is hot and the stone/steel is hot, slide the pie into the oven. Then, switch on your broiler. This will allow the oven to get even hotter right above the pizza, making for a superior pie. If your broiler cycles on and off, crack the oven door slightly with a spoon jammed into the door. Don’t burn down your house. Watch the pizza cooking; it should only take 4 to 5 minutes. Let darker brown spots form; these are the good bits. Let the stone/steel heat up for a few minutes before cooking your next pizza.