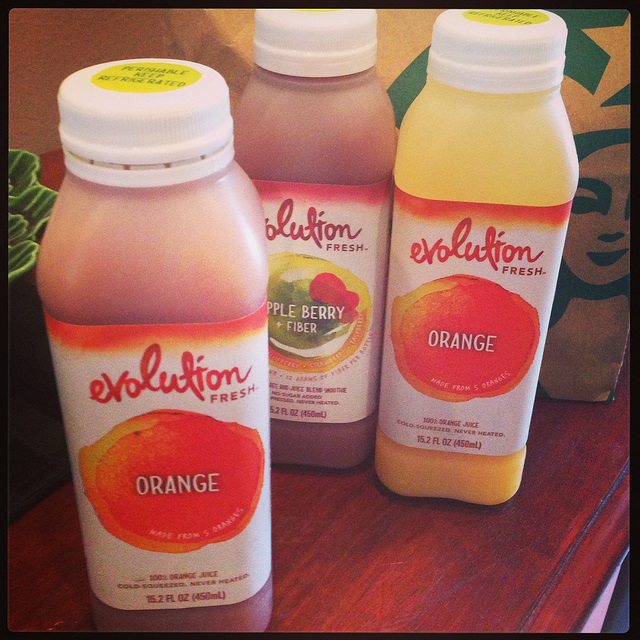 Starbucks’s (NYSE:SBUX) Evolution Fresh juice brand is ready to quench its Midwest customers’ thirst. Starbucks said in an announcement Tuesday that the popular cold-pressed juices are now available in more than 360 Chicago-area Starbucks stores, and the expansion is expected to continue across America. Aside from Chicago, other areas benefiting from Midwest distribution feature most of Illinois, Milwaukee, Minneapolis, St. Louis, Detroit, Indianapolis, Cincinnati, and Cleveland. Following the expansion of Evolution Fresh juices in Chicago and greater Midwest Starbucks stores, the brand plans to continue nationwide distribution of Evolution Fresh through U.S. company-operated Starbucks stores throughout 2014.

Starbucks acquired Evolution Fresh, a company that produces fruit juices, fruit smoothies, gourmet soups, and salads, in 2011 and has since realized great success with the brand thanks to health-conscious consumers’ growing desire to satisfy their fruit and vegetable needs by eating (and drinking) as clean as possible. The Seattle-based coffee giant reports that Evolution Fresh currently enjoys a significant share of the $1.6 billion super-premium juice category, and it expects to grow its national presence in the burgeoning industry even more.

Evolution Fresh juices are now available in more than 9,000 Starbucks stores and grocery retailers nationwide. Securing a presence in the Midwestern hub of Chicago is significant progress for Evolution Fresh, and Chris Bruzzo, senior vice president and general manager for the brand, said in the announcement: “We’ve been looking forward to introducing Evolution Fresh juices in Chicago area Starbucks stores and anticipate enthusiastic customer support. With the opening of our new state-of-the art juicery this past October, we have been able to quadruple the production of Evolution Fresh cold-pressed juices, allowing for greater distribution and accessibility to on-the-go nutrition for our customers.”

Evolution Fresh juices are unique in that they are cold-pressed using high pressure processing (HPP). This type of processing not only boosts the safety of the drinks but it also ensures the products’ nutrients and flavors are kept intact, which is good news for the consumers who are interested in benefiting from the drinks’ strong nutritional profiles. Starbucks highlighted in its announcement on Tuesday that according to Datamonitor Consumer’s global Consumer Survey, 55 percent of respondents said they are trying to eat as many vegetables as possible, which is why fruit and vegetable juices are growing increasingly appealing in 2014.

Evolution Fresh’s products certainly aren’t only the premium juices fighting for health-conscious consumers’ attention, but the company’s careful placement in Starbucks stores has helped boost its popularity and the likelihood that it will become an impulse purchase for those getting their caffeine fix in the morning and needing their greens for the afternoon. Starbucks locations generally don’t carry all of the Evolution Fresh flavors, but the company said that those in Chicago will carry six, including the most popular, Sweet Greens with Lemon. The other five are Super Green Smoothie, Defense Up Smoothie, Pineapple Coconut Water, Organic Carrot with Apple, and Orange Juice, and they will be priced between $2.99 and $6.99.

Thanks to Evolution Fresh’s new juicery, opened in October, the brand can now continue to expand throughout the U.S. without worrying about manufacturing capabilities. Starbucks says that that the brand’s new plant that stars a $70 million, 264,000 square-foot juicery is one of the largest HPP juiceries in the U.S. and it is capable of sourcing, peeling, squeezing, and pressing raw fruits and vegetables.