Sugar Addiction Is Real, and Here’s How It Happens

Research has shown that sugar is eight times more addictive than cocaine. What happens when you become addicted to sugar? The packaged and prepared food industry has figured it out, and with barely any regulation, they rely on it to keep business up. If you check the labels of just about any packaged food, there’s some form of added sugar in almost everything. Sugar affects your brain in a way that other foods don’t, and it keeps you coming back for more. The culprit is a chemical named dopamine.

Think about the last time you went on a salad-based diet. Eating salad day in and day out gets really dull, especially since most vegetables don’t trigger much of a dopamine response at all. Chances are, what kept you on the salad train was the dressing. They’re usually loaded with sugar, salt, and fat, the ultimate trifecta that triggers a higher dopamine response. They’ll get you to keep eating salads, but they’re not doing much good for your health.

Dopamine is referred to as your brain’s major currency by neuroscientist Nicole Avena in her Ted-Ed video. When you eat, dopamine is “withdrawn” as a response that tells your brain you did something it likes, and it’s proportional: The more exciting a food is, whether that’s a result of it being new or particularly fatty/salty/sugary, more dopamine will be released. We like dopamine; it makes us feel good. Over time, foods will become less rewarding so we go in search of something new for a sustained dopamine release, because we evolved to need varying diets to hit all of our required nutrients. Overly sugary foods, though, hack that evolutionary system, and remain rewarding. Sugar in the form of glucose is the main fuel for our brain, so we want to keep eating it, and our brains make sure of that. No matter how much you eat over any period of time, the dopamine just keeps releasing like 20s out of a broken ATM in a cartoon. This can lead to craving and loss of control. Too much too often can lead to your brain and body going a little haywire. Your pancreas becomes overstimulated and produces insulin around the clock to clear your system of sugar. Your brain still associates the sugar with positivity so you keep eating, but your body can’t keep up. You’re being egged on by dopamine, and your mouth is writing checks your body can’t cash. It’s the same downward spiral into addiction you get with drugs like cocaine and heroin. 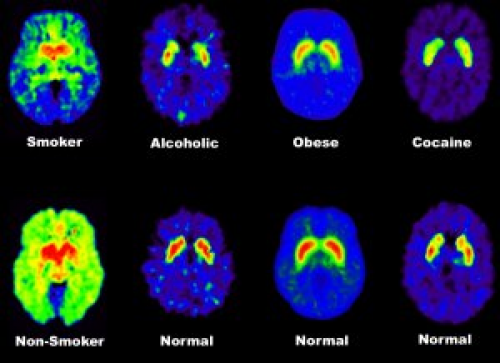 A 2013 study done at Connecticut College has shown that Oreo cookies are just as addictive as cocaine for lab rats. Not only do rats behave the same way when receiving Oreos as they do with drugs, but the research actually shows that there’s a significantly greater neural response to Oreos than to cocaine or morphine. Also interesting? Rats eat the filling first, too.

The effect of sugar and drugs like heroin and cocaine are the same in the brain. It’s the same chemical rush, the same consequences of addiction and increasing tolerance. When you’re addicted to something, your brain does something funny: It actually stops releasing dopamine in response to the actual stimulant and instead is released by the anticipation of the stimulant. In the above image, we see the PET scans of brains belonging to addicts and non-addicts. The red is the dopamine response. In the non-addict brains, you see a normal response. It’s a rush of dopamine. In the addicts’ brains, you can see that the dopamine response after eating is dulled. You’ll need more and more to get that spike in dopamine. Sugar, as with harder drugs, basically hijacks the neural pathways of the brain associated with dopamine, making users — in this case, sugar eaters — dependent.

So what happens when you stop eating sugar? You binge to try to fill the gap, you go through withdrawal, you find yourself suffering major craving, and it’s more likely you turn to something else to stimulate dopamine. Another study out of Princeton University studied sugar withdrawal in rats, which showed anxiety, chattering teeth, paw tremors, and head shaking. Researchers also found that, when placed in a forced swim test, rats in sugar withdrawal showed behavioral depression: They didn’t try to swim to safety.

It’s easy to see the cost of sugar’s prevalence in our society with our high obesity rates and epidemic of type II diabetes, a disease that is the outcome of repeatedly overdosing on sugar. According to Dr. Robert Lustig of the University of California, there are 600,000 food items in America, and 80% of them have added sugar. The USDA claims that the average American consumes between 152 and 160 pounds of sugar per year. That’s 60 teaspoons of sugar a day. It’s not hard to see how it racks up, when a can of Coke contains about 10 teaspoons of sugar and a tall nonfat Starbuck’s pumpkin spice latte with no whip has 9½ teaspoons. When it comes to food, sugar is everywhere: 2 tablespoons of Kraft salad dressing contains 1 teaspoon (and that’s a full 16% of what makes up those 2 tablespoons), Prego pasta sauce contains just under 3 teaspoons per every ½ cup serving, and even every slice of whole-wheat bread generally contains about ½ teaspoon. If it has a nutrition label on it or comes in a package, there’s probably been sugar added to it.

If sugar is indeed an addictive substance as science is proving and it’s stuffed into everything we buy, then it begs the question of regulation. The 2015 Dietary Guideline Advisory Committee recently released new recommendations to limit sugar intake to 10% of daily calories. In a 2,000 calorie diet, that’s equivalent to 13 teaspoons of sugar a day. What they don’t have is recommendations for getting the packaged food industry and the sugar-addicted public on board, and if there’s one thing harder than imposing regulations on a large and powerful industry, it’s trying to keep an addict from getting a fix.