Sticking with a vegan diet may appear tricky, but many grocers and markets carry a surprisingly wide selection of delicious, vegan-friendly foods — and sometimes, you may not even realize it! Some of the best snacks on store shelves are what PETA calls “accidentally vegan”: not specifically created with a vegan diet in mind, but able to be enjoyed by individuals adhering to a vegan diet (and, of course, everybody else).

Take a look at the following 7 surprisingly vegan foods and learn how you can use these ingredients the next time inspiration strikes in the kitchen. 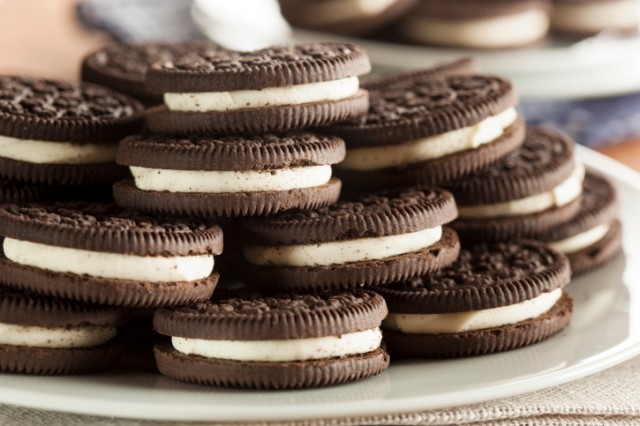 Vegans, rejoice! Oreo cookies may not seem to fit a vegan diet, but they are, in fact, completely free of animal byproducts. Take advantage of that fact by whipping up a Vegan Dirt Cake, compliments of Minimalist Baker. Sweetened cocoa milk makes a lovely, lush base for the delicious cookie-and-cream flavor of your favorite snack. The dish can also be served frozen.

Frito corn chips are cheap, tasty, and — if you didn’t already guess — vegan-friendly. If junk food is what you’re craving and you’ve got a taste for the salty stuff, this Frito Pie from Serious Eats should be next on your to-cook list. Ready in just 10 minutes, it’s the perfect answer for the more lethargic junk food lovers out there.

Baklava has been around since as early as the 8th century B.C., and remains as tasty as ever to this day. Try making a vegan version of this sweet, flaky Mediterranean dessert using Athens Phyllo Dough in this recipe from Leite’s Culinaria. If you’d rather satisfy your Phyllo craving in a savory dish, cook up this Vegan Pot Pie from Luminous Vegans.

Combine bread and vegetables in a light, savory broth with Tuscan Ribollita stew. Combining vegan-friendly Cobblestone Mill Whole Wheat Bread with a generous portion of beans and kale will give you the protein kick you need for tonight’s dinner. To make it a fully vegan dining experience, simply omit the addition of grated Parmesan on top in this recipe from The New York Times.

Give today’s serving of veggies a mouthwatering crisp by crusting them with vegan-friendly Ritz Crackers in this dish from Kitchen Daily. The Ritz Cracker Roasted Broccoli with Spicy Crumbs recipe gets its kick from a dash of mustard.

Fruit By the Foot

Bake up a vegan cake and decorate it in this cute package design from Spoonful using vegan-friendly Fruit by the Foot for a ribbon-wrapped touch. Simply follow this recipe from All Recipes for a simple and sweet vanilla vegan cake and top it with this fluffy vegan buttercream frosting from Chow.