Why Doctors Do Not Spend Enough Time With Patients Anymore 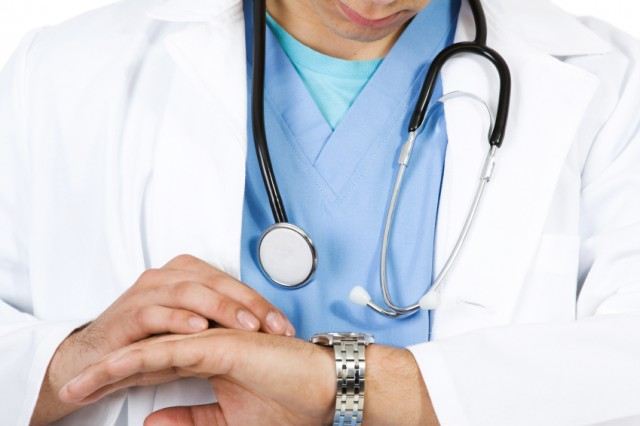 The American health care system is all business. And unfortunately, the industry values treatment over prevention and drugs over lifestyle changes. The end result for patients isn’t ideal, as they end up taking more and more drugs to treat an illness, without addressing its root cause. For example, many of America’s most deadly diseases, like diabetes and cardiovascular disease, are largely caused by poor diet. Many of the nation’s major health insurance companies are stockholders in fast food companies, so obviously they aren’t looking out for patients. But why aren’t doctors spending more time talking with patients about lifestyle changes? In fact, they aren’t spending much time with patients at all.

Today’s primary doctor visits are commonly scheduled at 15-minute intervals, and some physicians who work at hospitals are asked to see a new patient every 11 minutes, according to a 2014 article from Kaiser Health News. Even in that short time frame, doctors probably aren’t listening attentively to their patients. A 1999 study of family doctor practices found doctors let patients speak for only 23 seconds before redirecting them, and only 25% of patients got to finish their statement. Another study, this one out of the University of South Carolina in 2001, found primary care patients were interrupted after just 12 seconds, either by the health provider or a knock at the door.

Some say the time crunch during doctor visits originated in part with Medicare’s 1992 adoption of a byzantine formula using “relative value units,” or RVUs, to calculate doctors’ fees. Not only that, the entire fee-for-service payment model dominating U.S. health care rewards physicians who see patients in bulk. The bottom line is, health providers aren’t financially incentivized to spend time talking to patients. In a 2015 Freakonomics interview, Jeffrey Brenner, a family doctor in New Jersey, says:

“In our system we have an asymmetry in price. So we pay a whole lot of money if you cut, scan, and hospitalize patients. If they have procedures, if they go through machines, we pay an enormous amount of money for those things. If you talk to a patient, you actually lose money in many instances. So when a cardiologist walks in the room and talks to your family member, that’s actually a loss leader. That doctor is losing money every moment they stay in a room with your family member. The way they make money is by getting you out of that room back into the scanner that they’re leasing in the back of the office. That’s not their fault. That’s the fault of how we’ve structured the incentives in the system.”

In most cases, doctors only make money by prescribing, testing, scanning, and rushing patients out the door as fast as possible. This is dangerous in terms of unnecessary testing and prescribing, and it’s also dangerous because communication in the doctor-patient relationship isn’t just a feel-good exercise. It impacts the quality of care. But as Brenner points out, it’s not the physician’s fault the system works this way. Doctors are actually very unhappy about it too.

According to a 2014 Wall Street Journal article, there is a growing discontent among physicians, covering everything from feeling unappreciated to the problems with the larger health system. They practice in an environment where treating patients with insensitivity and impatience has become the norm, and they are forced to spend an hour per day on insurance paperwork. As doctor dissatisfaction escalates, more doctors are publishing insider accounts of the failing American health care system.

Brenner is calling for a health care revolution, focused on a “less-is-more” approach to health care, meaning fewer unnecessary tests, procedures, and drugs, and a greater focus on patient empowerment. He also says we should be delivering health care for less money, which is not the typical goal in the health care community. When it comes to one-on-one time with patients, Brenner says Americans shouldn’t discount the shortcomings of the medical education system. Medical training essentially bypassed the Enlightment, in his view, which is why today’s doctors are still taught to memorize and follow hierarchy as opposed to critical thinking skills and the scientific method.

Most would agree the American health care system is struggling, if not failing altogether. “It’s become so brittle, and so overwrought,” Brenner says, “so over-bonded and so over-capacity that the next great American bailout could be our academic health centers, our research centers.” Then America’s sick, frustrated, and broke patients will be left wondering: Do we even want to bail out these institutions?