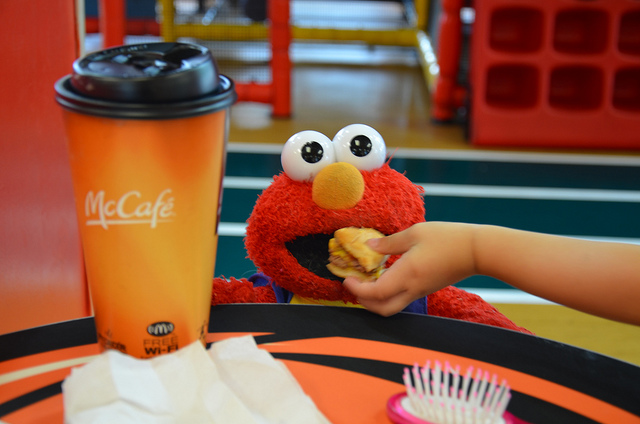 In recent years, consumers have demanded healthier fast food options. Spurred on by movies like Super Size Me, investigations into what really is inside a chicken nugget and general wellness movements people wanted better-for-you choices. Companies responded with salads, apple slices, and calorie counts, but was the change merely cosmetic? Have companies managed to appear healthier without altering food in a way that actually, positively impacts health? By looking beyond the calorie content, it becomes evident that healthy fast food remains a mythical option.

The second ingredient in the yogurt in the Fruit ‘n Yogurt Parfait at McDonald’s is sugar, followed by modified food starch and fructose. It is a low-calorie option, containing only 150 calories. However, it has a measly 4 grams of protein and 23 grams of sugar. Of course, this problem isn’t limited to McDonald’s. YoCrunch is a pre-packaged yogurt parfait. It has a low calorie count and little protein, but it does manage to have less sugar at 16 grams.

However, when it comes to yogurt, both could do better. A serving of Dannon Light & Fit Greek Yogurt has 12 grams of protein and only 7 grams of sugar. Like the parfait at McDonald’s, the parfait at Starbucks has strawberries, blueberries, granola, and yogurt.  However, Starbucks uses Greek yogurt in its parfait, which has 14 grams of protein, 19 grams of sugar, and 220 calories. Calories cannot be the sole determinant of healthy options. A snack with more protein will leave a person feeling fuller longer, as well as cut down on snacking between meals.

When snacks on the McDonald’s menu do better in terms of protein, like the 16 grams of protein in the Chipotle BBQ Snack Wrap, other pitfalls are encountered. The wrap may only have 250 calories, but one contains 670 milligrams of sodium, 28 percent of a person’s daily allowance. That is a large amount, considering this is sold as a snack, not even a full meal.

Of course, other fast-food establishments have faults, too. Every full-sized salad on Wendy’s menu has more calories than a Double Stack hamburger. The Double Stack has 460 calories, 2 grams of fiber, 29 grams of protein, 1,250 milligrams of sodium, and 25 grams of fat. To find a comparable calorie count in the salads, it is necessary to go down to half sizes. With 450 calories, the Baja Chili Salad half size is the closest. The salad has 5 more grams of fat (30), and less protein (16 grams). The salad has 7 grams of fiber and marginally less sodium (1,090 milligrams).

The BBQ Chicken Salad at Panera provides an important contrast. It has 480 calories, making it comparable to the options at Wendy’s. It has 31 grams of protein, more than the hamburger. There are 21 grams of fat, but only 3 grams are saturated fats. In the half-sized Wendy’s salad, there were 9 grams of saturated fats, and for the hamburger, it was 12 grams.

Returning to the McDonald’s wrap, Chipotle BBQ Snack comes served on a flour tortilla, which is made not from whole grains but enriched flour. Enriched flour is commonly used in the bread for Wendy’s and McDonald’s. The healthiest bread options are 100 percent whole grains. Dr. Gerbstadt, MD, RD, told Shape that enriched flour “means niacin, thiamine, riboflavin, folic acid, and iron are added after these and other key nutrients are stripped out in the first place during the refining process, whether it’s wheat, rye, or other grains.” Adding these components back in does little to help, because the germ and bran are stripped out while refining, limiting the nutritional potential of enriching.

Enriched flour doesn’t only cause a problem for health claims at typical fast-food joints, but at places marketing themselves as healthy as well. A quick look at the ingredients in Subway’s food shows that they use the enriched version, instead of the healthier whole grain option. The meat at Subway is not all natural or antibiotic free, and resembles that used by McDonald’s. All either say that the chicken used is “breast with rib meat, water, seasoning.”

“Organic” is another term you won’t find commonly listed on the menus. Although Panera is endeavoring to add more organic options, there is no specific information regarding the foods that appears on the Environmental Working Group’s dirty dozen. The list is a compilation of foods that retain high levels of pesticides after making it to the grocery store. The group explains it is important to avoid overexposure to pesticides because heightened exposure can lead to problems such as toxicity in the brain and nervous system, cancer, and hormone disruption. Apples consistently top two lists: healthy options targeted to kids at fast-food restaurants and the dirty dozen.