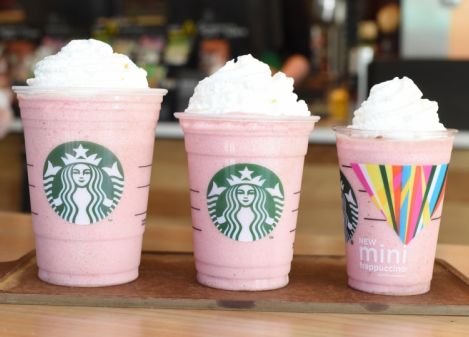 It’s not often that Americans want less of something from a restaurant. You want to feel like you’re getting your money’s worth from the sandwich, fries, or milkshake you purchase. But in the era of public officials clamoring for Americans to adopt a healthier lifestyle, there are signs that consumers are taking note. Fast food restaurants are adding vegetarian options to their menus, apparently for a cost savings but also because customers are choosing to spend their dollars at places that offer fresher ingredients and leaner options. Though Americans may always struggle to turn down a larger size of french fries, Starbucks is hoping to score big by cutting down the size of one of its most popular drinks — the Frappucino.

As of May 11, Starbucks is offering one of its signature drinks in a “mini” size, to complement the typical tall, grande, and venti offerings. “Frappuccino fans have made more than 6,000 suggestions regarding the blended beverage on My Starbucks Idea,” the company wrote on its news page. “While most customers offer ideas for new flavor combinations, many have been asking for a smaller drink size.” The mini drink is 10 oz., slightly smaller than the 12 oz. tall version. The offering is nationwide while supplies (cups?) last, and customers can get any flavor they want in the mini size.

So is this a marketing ploy for the novelty of it, a strategic move because of customers’ health concerns, or something else? It’s hard to say exactly, but it’s likely that the test run last summer in certain markets was successful because of a handful of factors.

Though many Americans are still perfectly content with their Big Gulp super sized sodas and portions, a growing number of people are showing larger concern about the volume of food they eat during the course of a typical day. It’s a trend that’s continued for a few years, as Full-Service Restaurant’s website noted. In 2012, the publication called it “A big year for small portions,” and described how several restaurants were paring down their plate sizes and offering half-portions to customers who readily made the switch.

Tapas and “small plates” became novelty items, but also cut down on the amount of food customers ate during each meal. More recently, companies like Coke have marketed their smaller offerings more aggressively, putting its “mini” 7.5 oz. cans of soda in the spotlight. The smaller portions obviously means fewer calories and less sugar, selling points for parents who are hoping to curb their children’s (or their own) sugar fix.

The shrinking plate sizes occurred during the height of the soda ban in New York City, when then-mayor Michael Bloomberg attempted to outlaw soda servings larger than 16 oz. The ban was officially ended when the court system called the rule an overreach of power, but the sentiment made quite a statement. So did a series of posters in the city’s subway system in 2012, which were headlined, “Cut your portions. Cut your risk.” The public service announcements from the city’s Department of Health and Mental Hygiene featured a presumably diabetic man with his right leg amputated, along with a picture of how portion sizes have increased over the years.

Not everyone cares about portion size or how many calories are in their Starbucks coffee, but it’s clear that a growing number of people are. Starbucks said it was responding to customer requests for the smaller Frappucino size. The motivations for that could be that people were hoping a smaller size would also mean a smaller price tag. For the most part, that’s not entirely the case. A tall Frappucino varies in price depending upon location, but is generally in the $4 range. According to the Associated Press, the mini size will cost 20 to 30 cents less than the tall.

Katie Seawell, senior vice president of category brand management at Starbucks, told the AP the mini Frappuccino helped lift overall store sales in the regions where it was tested last year. Seawell added it attracted new customers and got existing customers to come back more frequently.

Perhaps it’s the novelty, or the few cents of savings that draw people in. More likely than not, it’s also the slight health benefits. If you’re drinking a Frappucino of any size, chances are you’re not too overly concerned about your intake of sugar. But the mini size does offer a way to get your vice while also feeling slightly better about your calorie intake. The calories vary by flavor, but the AP reports that a mini coffee Frappucino with no whipped cream will have 120 calories and 24 grams of sugar. A tall (just two ounces larger) has 180 calories and 36 grams of sugar, a grande has 240 calories and 50 grams of sugar, and the largest size, a venti, has 350 calories and 69 grams of sugar. (That’s the equivalent of 17.25 teaspoons of sugar, or a little over 17 sugar packets.) Though the website isn’t updated for its mini sizes, Starbucks provides all of its nutrition information online.

Seawell declined to tell the AP if the mini Frappucinos will become a permanent offering at the coffee chain. That’s probably because the company is waiting to see if the smaller portion is popular like it was during the tests last year. In order to catch on long term, customers will have to believe that the benefits are worth the size — either from a health perspective, a cost perspective, or both.