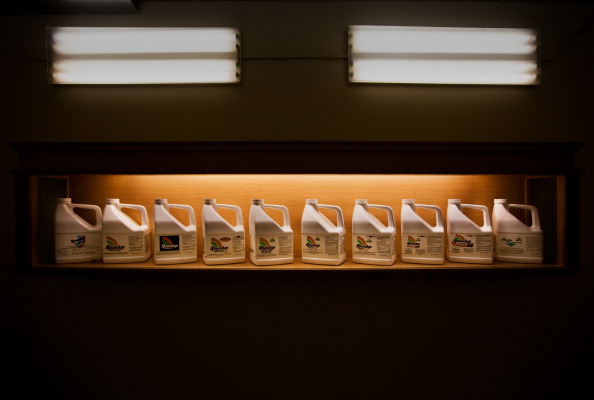 You may want to round up any industrial strength weed killer lurking in your garage or storage shed, because the chemicals contained in those jugs might just be a one-way ticket to tumor town.

That’s the assessment handed down by the World Health Organization, which published the results of a report that found glyphosate — a weed-killing chemical that is an ingredient in many products  — is likely carcinogenic. The report, published in the medical journal The Lancet by The World Health Organization’s International Agency for Research on Cancer (IARC), claims that glyphosate is raising some concerns that it could be linked to cancer, though there are still questions surrounding it.

The IARC, which is based in France, will have its findings reviewed by the Environmental Protection Agency (EPA), the federal agency in charge of overseeing and making determinations regarding chemical regulations, according to a report from The Associated Press. The AP also says that the IARC classifies possible carcinogens on a four-tier system, ranking chemicals and other possible hazards somewhere between a four — a known carcinogen — and a one, which means the substance is probably not carcinogenic.

Glyphosate falls into the number two category on that scale. Not the best, but definitely not the worst. For perspective, other things also in the same classification include aloe vera extract, and even coffee.

That’s a bit of good news, which was followed by a little bit more: home gardeners probably don’t need to worry, as those who are actually put at risk by exposure to glyphosate are those working with industrial amounts — as it has turned up in blood samples taken from agricultural and farm workers, whose bodies have absorbed it. Other than occupational exposure, though, there probably isn’t a whole lot to worry about.

“I don’t think home use is the issue,” Kate Guyton of IARC told the AP. “It’s agricultural use that will have the biggest impact. For the moment, it’s just something for people to be conscious of.”

While that is reassuring, there is still some concern surrounding the IARC’s claims. As mentioned before, glyphosate  is a rather common chemical, and one that is sold as an ingredient in many products sold by companies like Monsanto, among others. Although the IARC found only “limited evidence” that Roundup can lead to diseases like non-Hodgkin’s lymphoma and lung cancer, it’s a bit troubling to know that a potentially dangerous substance has seen such widespread use for so many years.

Of course, big business isn’t exactly thrilled with the report’s findings either, and is actually pressing the IARC to hold meetings with the press to explain the findings, which the company feels are not necessarily convincing, given the data.  “We don’t know how IARC could reach a conclusion that is such a dramatic departure from the conclusion reached by all regulatory agencies around the globe,” Philip Miller, Monsanto’s vice-president of global regulatory affairs told The Guardian.

As of today, American regulators still consider the chemical to be safe, which is why it has continued to be used to protect important crops, like corn and soybeans.

Clearly, companies like Monsanto are justifiably irritated with the IARC, especially given that proof glyphosate and the products which contain it are actually dangerous is scant, and that relatively few people are in harm’s way. Still, it’s yet another public knock against a company and industry that has not fared well in the public eye. Let’s face it, people really dislike Monsanto, often with good reason. And the headlines about some of its products being linked with a potential carcinogenic are only going to add fuel to an already-burning fire.

Of course, the real question that all of this inevitably leads to is whether or not the EPA will step in and put new regulations on products containing the offending chemical. They’re likely to encounter a hell of a fight from Monsanto and its army of lobbyists, but it could shape up to be a real public relations battle for environmental and health groups against companies hoping to continue selling products containing glyphosate. Even so, there’s still more research to be done before any definitive plan is put into action.