Will Your Thanksgiving Dinner Cost More Than $50 This Year?

Thanksgiving may not be the most expensive holiday, but its cost can still add up fast. Plus, with Black Friday immediately following it, along with Christmas, Hanukkah, and Kwanzaa right around the corner, saving on Thanksgiving will help put a little extra money in your pocket when you go to buy gifts for all of your loved ones. 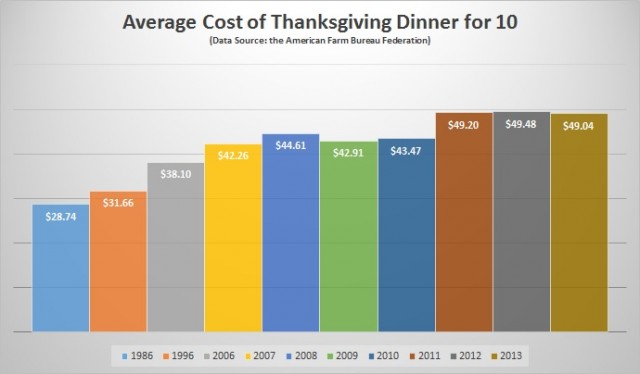 The average cost of a Thanksgiving meal for 10 people has sat at right around the $50 price point for the past few years, according to a 2013 analysis by the American Farm Bureau Federation. It included the following items in its cost assessment:

Do you spend this much money on Thanksgiving dinner? Maybe more?

This year, the average cost of a Thanksgiving meal may rise, as the price generally follows a similar pattern to the consumer price index for food at home, which has been rising over the past several months. Overall, it has increased by more than 3% between September 2013 and September 2014, before seasonal adjustment.

In a recent news release, the Bureau of Labor Statistics said: “The food at home index has risen 3.2 percent over the past year. The index for meats, poultry, fish, and eggs has increased 9.4 percent over that span, with the index for beef and veal up 17.8 percent and the pork index up 11.4 percent.” Given these increases, we could see the average cost of a Turkey Day dinner exceed the $50 mark for the first time.

If you’re looking to save on Thanksgiving this year, here are a few tips to help you combat rising food costs.

Choose inexpensive alternatives. For most families, a fresh turkey is by far the most expensive Thanksgiving menu item. You can save by choosing a more inexpensive alternative, like a whole chicken or a frozen turkey. In spite of the rising costs of many meat items, the average price of whole chicken is only $1.54 per pound, and for frozen turkey, it’s around $1.58 per pound as of late. The price of frozen turkey has actually declined by nearly $0.25 between September 2013 and September 2014.

Use store deals and coupons. Some stores offer promotional deals where if you buy a minimum amount of groceries each week for a certain time period, you can receive a coupon for a free (or discounted) Thanksgiving dinner. Food Lion, for instance, offers a $20 coupon for MVP card customers who spend $40 each week for any six weeks between October 1 and November 25.

These coupons can be great deals, but only for those who planned on buying these groceries from that specific retailer anyway. It may not be a good idea to go out of your way or spend extra money in efforts to earn a coupon. Also, be sure to review any terms and conditions attached to these promotions to make sure you’re really getting a fair deal. Buying packaged deals — where a turkey, side items, and dessert are sold together for one price — can sometimes save you a few bucks, too.

Don’t go overboard. Are you planning on cooking enough food for an army? If you’re trying to save, cut out a few dishes or maybe ask each of your guests to bring a dish if you’re planning on having a Turkey Day gathering.