Work Out Like a Supermodel: Alessandra Ambrosio’s Fitness Plan 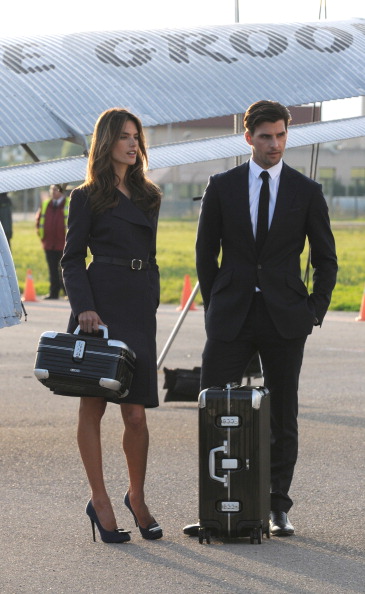 A stunning supermodel couldn’t possibly have any insecurities, right? Actually, that isn’t the case at all — at least not for successful Victoria’s Secret model Alessandra Ambrosio, who willingly admits to having cellulite. She doesn’t dwell on her body issues, though. Instead, she  addresses them through her diet and workout routine, which involves everything from Yoga to Pilates to spin class. Her motto? Live a happy, healthy life, and don’t sweat the small things. Here are a few of Ambrosio’s tips and tricks.

Ambrosio is the first to admit that staying in great shape takes some work. While she has body issues like everyone else, she takes a proactive approach to dealing with them. “If I look in the mirror and see cellulite — and I have some, every woman does! — I run the Santa Monica Stairs. They’re really hard. I’ll go up and down the [170] steps four to six times, usually once a week. It definitely helps the butt and legs while you’re getting a little sun and fresh air at the same time,” she tells Self.

She is also a believer in flaunting her attributes, rather than trying to hide or alter them. Instead of aiming for a stick-thin figure, Ambrosio works to enhance the curves she was born with. To create a curvier, rounder behind, Ambrosio suggests putting five-pound ankle weights on each leg, getting on all fours and kicking each heel up toward the ceiling. Aim for three sets of 20, she tells Self. While you’re at it, add on three sets of 20 fire hydrants by lifting each bent leg up and out to the side.

Ambrosio also swears by the Brazil Butt Lift, a routine that slims your thighs while firming your butt, which trainer Leandro Carvalho created just for her. The workout combines ballet, capoeira (that’s Brazilian martial arts), a little bit of kickboxing, and Afro-Brazilian dance. This intense routine works muscles from twelve different angles to reshape your butt, slim your hips, and tighten your inner thighs. “You’re doing cardio at the same time that you’re using muscles and sculpting the body,” Carvalho says to Shape. “All you need is your own body weight. My workout tones your bum bum, but keeps your curves so you can stay sensual and feminine.”

Ambrosio is also a fan of high-intensity Pilates. You will often find her at Pilates Platinum, a class that focuses on burning calories and fat. She also frequently attends Soul Cycle Spinning Classes, a 45-minute routine where you “sweat like crazy,” she tells Glamour.

The supermodel is not one to sit around. She also participates in barre workouts, as well as routines that get her outside such as volleyball, surfing, roller skating, and snowboarding, writes Swide.

While she always appears to be in perfect shape, Ambrosio says there are days she doesn’t feel like her body is photoshoot ready. “So many times, I haven’t felt ready for shoots. I’m like, why didn’t I work out more? But it’s life,” she says during an interview with Self. So, how does she fight her insecurities? By focusing on her positive attributes. If you’re having an off day, just focus on yourself and “be the best you can be,” she says.

As an added tip, Ambrosio suggests trying to get a workout in before hitting the beach, so you’ll feel lean and tone when you’re rocking your swimsuit. If all else fails, “that’s when you go for a one-piece,” she tells Cosmopolitan.

Relax, her diet is much more realistic than you think. It’s Ambrosio’s job to be in great shape, but she’s found a way to do that while still being able to enjoy delicious food.

“I like to wake up and have eggs benedict with a cappuccino and orange juice. And then for lunch, I’ll have rice, beans, and chicken or meat. And salad because I love salad. At nighttime I would have like Japanese food, like sushi, or some Japanese barbecue. And I love chips. Salt and vinegar — ah! I’ll go into the airport and buy like three bags of them. And I can’t help myself,” she tells Hollywood Life.

It’s not about depriving yourself; it’s about eating in moderation. Focusing on portion control allows Ambrosio to occasionally indulge. For the most part, though, she focuses on meals that incorporate eggs, fruit, chicken, rice, beans, nuts, and protein cocktails with berries for a snack, per Swide.

One of Ambrosio’s most important diet tricks is consistency. She never misses breakfast, and often opts for a soft-boiled egg, milk, and toast, according to Health Remarks. She also eats frequently, breaking her meals up into six smaller meals throughout the day. One of Ambrosio’s go-to dinner recipes, which she fixes for her two kids, is a chicken and veggie stir-fry. This recipe, as shown in Following In My Shoes, makes for a great dinner — it’s both healthy and easy to prepare!

Directions: In a small bowl, mix the soy sauce and mirin. Set aside. Pat dry the chicken breasts, slice each breast into one-inch thick strips, and then cut each strip in half. Chop any large stir-fry vegetables to ensure all vegetables are uniformly sized. Chop the pepper into sizes similar to stir-fry vegetables. Mix the vegetables and pepper together and set aside.

Place a large wok or frying/saute pan over high heat. When water droplets evaporate within one to two seconds of contact, the pan is ready to stir-fry. Remove the wok from the stove-top. Swirl the sesame oil in the wok to coat the interior surface. (Something to keep in mind: if the oil immediately begins to smoke, the pan is too hot. Wipe out the pan, allow it to cool, then return to the stove and begin again.)

Put the oil-coated wok back over the heat and immediately add the garlic. Stir for a few seconds until it’s fragrant and then push it up the sides of the wok where it is cooler. Pour the soy sauce/mirin along the interior sides of the wok so the liquid doesn’t lower the temp of the wok. Then, add the cut chicken to the bottom of the wok in a single layer to ensure even cooking. Let it sit undisturbed for one to two minutes until the bottom of the chicken has a nice light golden sear. Quickly flip the pieces over and allow the chicken to finish cooking.

When the chicken is no longer pink, move it to the sides of the wok and add the chopped vegetables to the center of the wok. Add a dash of black pepper. Allow the vegetables to stir-fry for one to two minutes, gently stirring once or twice, until they are bright in color. Carefully push the chicken back into the center of the pan and quickly fold the vegetables and chicken together. Remove the wok/pan from the heat source and pour the stir-fry into a serving dish. Serve immediately over white or brown rice, quinoa or udon noodles.