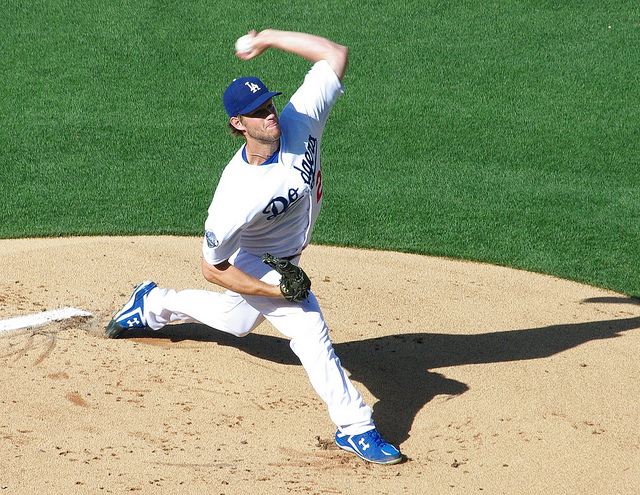 Clayton Kershaw may be making Magic Johnson’s dreams come true very soon. Earlier this year Johnson, part owner of the Los Angeles Dodgers, had said that he was keen on making Kershaw, whom he called the “best pitcher” in baseball, a very rich man. ”He’s our Sandy Koufax of today,” Johnson said at the time. “That’s how important he is. We feel he is the best pitcher in all of baseball. And when you are the best, you gotta be paid the best. We understand that.”

And now according to ESPN, the Dodgers have offered Kershaw a lifetime contract in the range of $300 million. Although negotiations broke down for the moment partly because Kershaw was unsure of agreeing to such a long deal, but the left-hander, who will be eligible for free agency following the 2014 season, may be coming around soon. According to ESPN sources, the Dodgers are ready for a shorter deal that works for Kershaw, and the pitcher may agree to it as early as this winter. ESPN added that a large portion of the fee will be paid to a charity of Kershaw’s choosing. The pitcher has just finished a two-year, $19 million contract with the Dodgers that paid him $11 million this season.

The 25-year-old Kershaw was the seventh overall pick in the 2006 draft, and has gone on to lead the National League in ERA the last three seasons. He is on his way to winning the Cy Young Award this year, after having already claimed it in 2011.

The deal, if and when it comes through, will make Kershaw the highest-paid pitcher ever. At the moment that title belongs to Justin Verlander of the Detroit Tigers, who signed a seven-year contract for $180 million. Verlander can potentially extend that to an eight-year, $202 million contract if he manages to make the top five of the Cy Young Award shortlist in 2019. Felix Hernandez is on a seven-year, $175 million contract with the Seattle Mariners. The New York Yankees, the sport’s big payers, signed CC Sabathia to a seven-year, $161 million deal after the 2008 season.

As ESPN points out, the largest contract in baseball at the moment belongs to Alex Rodriguez, who has been signed by the Yankees for a 10-year, $275 million deal. That can potentially go up to $305 million. Dodgers, however, have sought to change the money scales this season and are currently the biggest overall payers in baseball. As of October 23, 2013, Spotrac estimated that the Dodgers had a combined player-fee check — including active contracts, dead money, and salaries paid to players on injured reserve — of over $238 million. The Yankees are second at just over $228 million.

Johnson is part of the group, which also includes Mark Walter and Stan Kasten, that bought the Dodgers before the 2012 season for a record $2 billion. Their biggest player payouts as of now include Adrian Gonzalez, Carl Crawford, Josh Beckett, and Nick Punto.