When “have it your way” is your company tagline, you have to be ready for a little corporate creativity. In America, that means extra pickles and bacon sundaes. In Japan, we’re looking at fried garlic, Spam sliders (specifically for women), bamboo charcoal, and squid ink.

In 2001, Burger King (NYSE:BKW) completely fell out of Japan’s competitive fast food industry. After re-entering the market, the company has spent the past five-and-a-half years proving it can keep up — and in Japan, that means getting a little weird.

Here are 10 of the weirdest burgers on Japan’s Burger King menus. 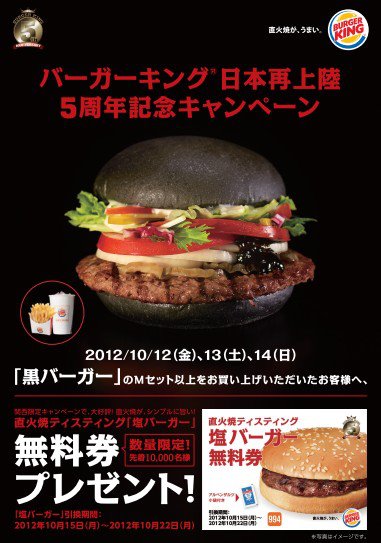 As just one of Burger King Japan’s fifth-anniversary burger offerings, the Koru Burger — koru meaning “black” in Japanese — hit the menu on September 28, 2012, at 790 yen ($8.05) for a meal. The black buns were made with bamboo charcoal, and the black ketchup was colored with squid ink and flavored with garlic.

Why black? Because Burger King Japan shares an anniversary with Coke Zero, and everyone knows the best couples always color-coordinate at anniversary parties. 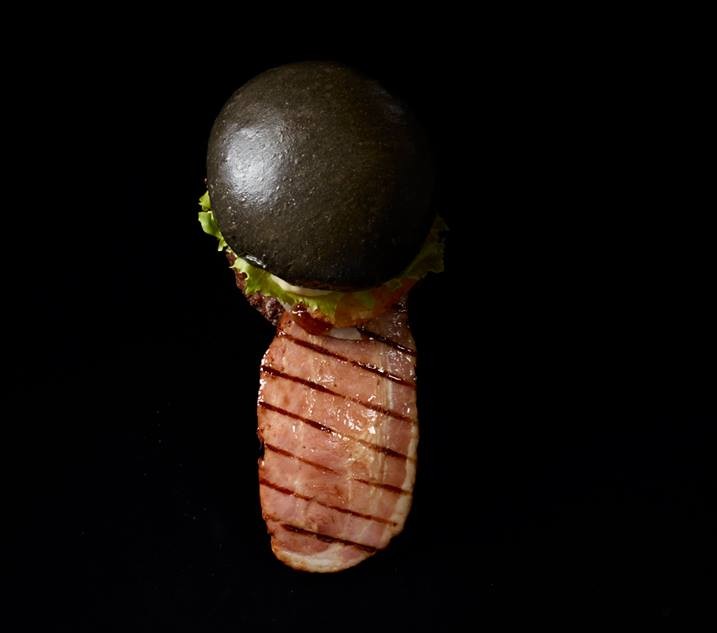 For those who like their Koru Burgers dressed up for Halloween with a side of sass, this burger is meant to resemble a ninja sticking its tongue out at consumers.

The offering stars black buns made with bamboo charcoal, black-brown garlic soy Chaliapin sauce, and a “tongue” of what BK is calling king’s bacon, which resembles Irish rashers more than crispy, American-style bacon. Though decidedly less ninja-like, the patty is also topped with onions, lettuce, mayo, and hash browns. For those who like fun facts, Chaliapin sauce is named after Russian opera singer Feodor Chaliapin, making this a ninja with some class.

Complete with its own anime character logo, Burger King’s most recent release hit menus in Japan on October 25; it’s selling for 680 yen ($6.93). As for the nagging question we’ve all been asking — why a ninja would stick his tongue out at you — Burger King has offered no answer. 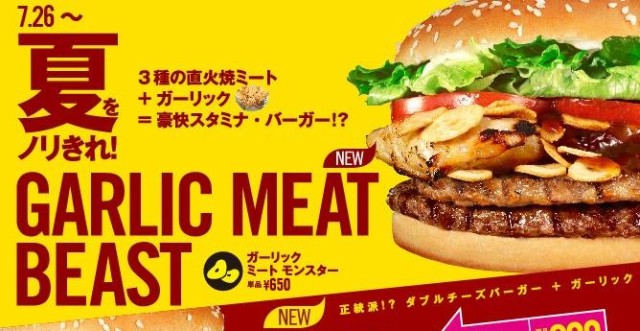 On the menu during the 2013 summer months is a sandwich Burger King called the Garlic Meat Monster in Japanese and the Garlic Meat Beast in English. This Quarter Pounder patty was topped with a garlic-seasoned pork patty, chicken breast filet, red miso and green onion sauce, teriyaki sauce, the typical lettuce/onion/tomato/mayo fixings, and plenty of fried garlic slices. Sure to thwart vegetarians, bikini season, and vampires, the Meat Beast sold for 650 Yen ($6.62) — clearly a small price to pay for such a triple threat. 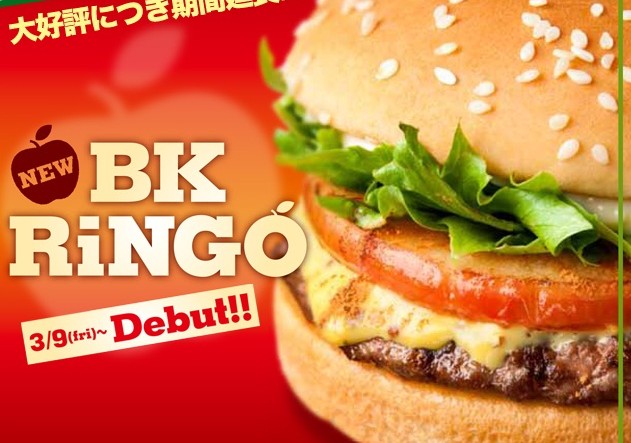 Having absolutely nothing to do with Ringo Starr, this burger takes its name from the Japanese word for apple. It’s a beef patty topped with a cinnamon-spice grilled apple slice and honey mustard, as well as lettuce, tomato, and mayo. It’s healthier than the Meat Beast, though it does sport a strange flavor combination — with spiced apples and honey mustard, the pork patty may have been the way to go on this one. This “Fresh, Juicy, and Spicy!” sandwich sold through February for 490 yen ($4.99). 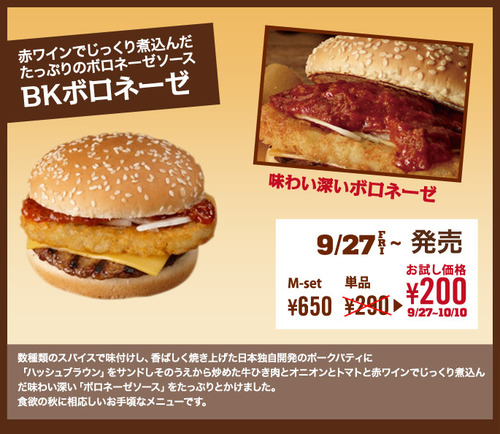 Sometimes, a fancy spaghetti dinner can be just a bit too expensive. That’s where the Bolognese Burger stepped in. Complete with a pork patty, cheese, a hash brown, and a Bolognese sauce with ground beef, tomatoes, onions, and red wine between hamburger buns, this limited-edition menu item featured all the carbs of a big plate of spaghetti in your hand and clocked in at 290 yen ($2.95). White tablecloth, candles, and a date were not included. 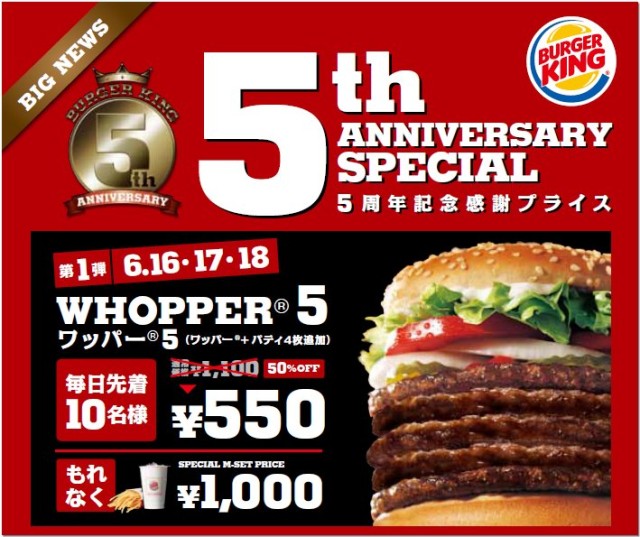 Another fifth-anniversary stunt, this burger contained — you guessed it — five patties. With only two buns, this was either a serious mouth full of meat or, for those of us who can’t unhinge our jaws, two unequal, open-face burgers. Really getting into the fifth anniversary spirit, Burger King slashed the price-that-never-was in half before the burger hit the menu, bringing it down to 550 yen ($5.60). 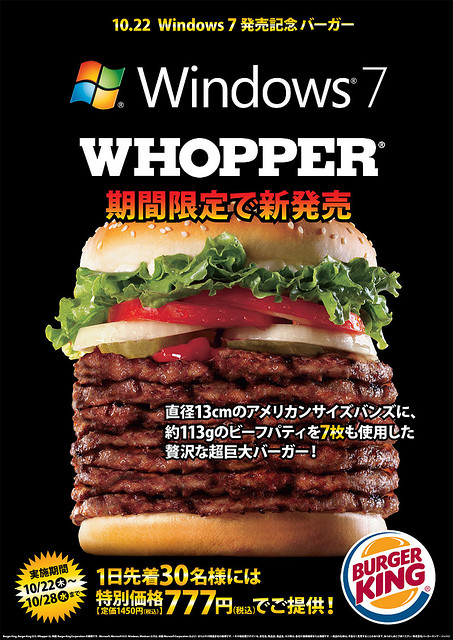 The Windows 7 Whopper makes BK’s Five-Patty Whopper look like a short stack. As a promotion for the release of the Microsoft (NASDAQ:MSFT) operating system in 2009, this 5-inch tall burger was available for only seven days. (Clever.) The burger was sold for 777 yen ($7.90), though only to the first 30 customers. (Less clever?) Everyone else had to put down 1,450 yen ($14.75) for the privilege that was this pillar of uninterrupted meat. 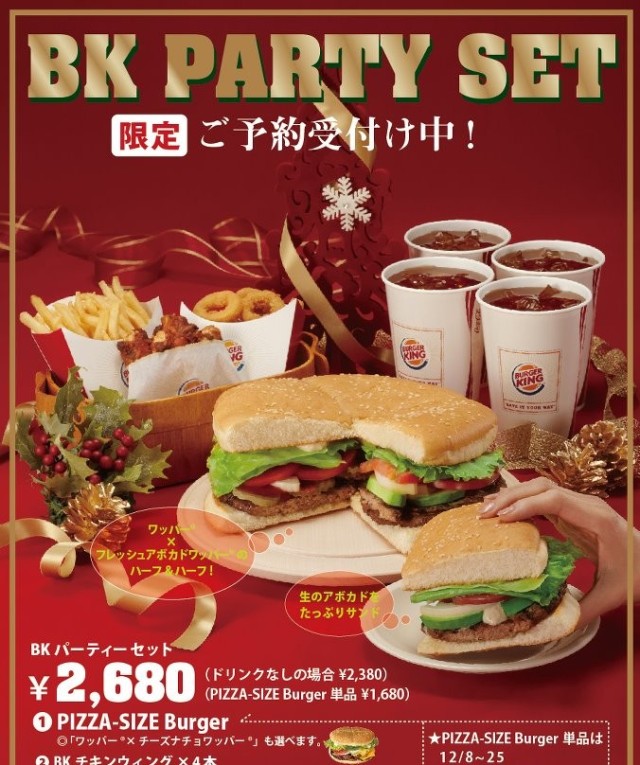 While we’re on the topic of ridiculously sized burgers you can find in Japanese Burger Kings, this menu item appeared just in time for the holidays in both 2010 and 2011. In 2010, it really was a pizza burger: four whopper patties topped with mozzarella, marinara, and pepperoni, stacked into a 9.5-inch sesame bun and then pre-sliced into six wedges. This particular calorie bomb (the whole thing clocked in at 2,520 calories and 144 grams of fat) was available in Japan and the BK Whopper Bar in Midtown Manhattan. In Japan, this sold for 1,680 yen ($17.79), but sold in New York for only $13.

The following year, Japan brought the pizza-size burger back with flavor upgrades in the Fresh Avocado and the Cheesy Nacho. The first was a normal, albeit gigantic, Whopper topped with slices of fresh avocado. The second was topped with Whopper fixings, cheese, tortilla chips, and jalapeños. Better yet, for a limited time, you could order a Party Set, complete with your choice of Pizza-Size Whopper, four medium soft drinks, and a side of fries, onion rings, and BK chicken wings. The BK party-for-four set was yours for 2,680 Yen ($27.32). We’re guessing that the calorie count on the Cheesy Nacho style pizza-burger and party pack tops the charts. ‘Twas the season for artery clogging, though, right? 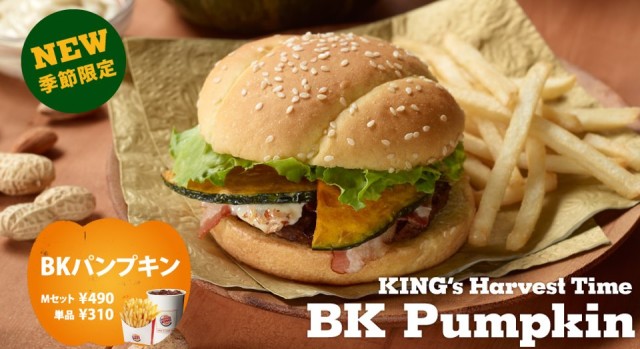 Decidedly more gourmet than its mega-bacon burger campaign, in which you could add bacon in 15-strip increments for 100 Yen ($1.02), October 2012 brought Burger King Japan customers the BK Pumpkin Whopper: a Whopper patty, lettuce, bacon, a couple of fried kabocha pumpkin slices, and a nut sauce made of peanuts, almonds, cashews, hazelnuts, and sesame seeds. For ultra-gourmets who couldn’t get enough, Burger King also offered the BK Pumpkin Bomb, with a total of 10 slices of fried kabocha pumpkin. Included in a BK meal, this actually tasty-sounding special was yours for 490 Yen ($4.99) for those who could restrain their pumpkin love and 590 Yen ($6) for those who couldn’t. 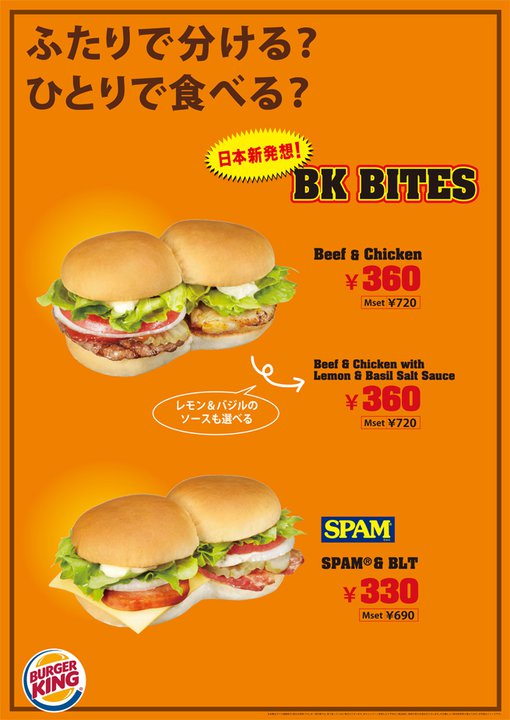 There was some controversy about calling this offering BK Shots, so these little burgers officially debuted as BK Bites. Sporting the tagline “What Women Want, Women Get,” BK’s gender-driven summer 2011 campaign claims that the sliders — compared to normal-size Whoppers and Meat Beasts — are “lighter” and “suitable for women.” These BK shots come in supposedly lady-friendly duo packs, since everyone knows that women either A) want it all or B) can’t make up their minds. Rather than having to pick just one, women could soothe their BK craving with appropriately sized Spam and BLT or beef and chicken slider packs. Thank God BK Japan is looking out for us girls — they know how much we love our petite Spam sliders.