A MakerBot 3D printer creates an object from molten plastic at the 2013 CeBIT technology trade fair on March 5, 2013 in Hanover, Germany. CeBIT will be open March 5-9. (Photo by Sean Gallup/Getty Images)

After a banner year in 2013, 3D printing stocks bore the brunt of inflated expectations that did not materialize last year. A number of 3D printing companies made their debut on the stock market last year, but they got a disappointing reception from investors. There were two main reasons for the sector’s disappointing performance in the stock market last year.

The first one was hype. Incessant media coverage had inflated the promise of 3D printing. In the media’s version of events, consumers would turn into manufacturers and 3D print customized products for consumption. In other words, 3D printing was the death knell of manufacturing.

Sales figures from 3D printer manufacturer companies further fed into investors’ perceptions. 3D systems, a pioneer of the technology, used booking numbers from third-party channel inventory (instead of actual sales figures) to identify the number of printers sold. (The channels were also owned by the company.) Investors cooled to the idea of 3D printing when it became apparent that the promise of 3D-printed food and body parts was a long way off in the future.

The second reason is the as-yet-limited applications of 3D printing in industries. While there have been numerous innovations and isolated success stories in different industries, 3D printing’s utility in the manufacturing process remains unproven. The aerospace industry, which is also one of the biggest customers for the technology, mainly uses it for rapid prototyping. Even in this limited market, competition amongst 3D printer manufacturers is stiff.

However dismal the situation might seem, 3D printing is slated to become the next big thing. A number of new education initiatives promise to simplify the technology and increase its uses amongst consumers and manufacturing companies alike. As such, investors should back the technology for the long haul. Here are two factors that will become important as the market for 3D printing expands.

During its early days, 3D Systems and Stratasys were an embattled duo. Besides fighting each other, the two 3D printing pioneers were busy litigating against competition. Early patent battles in the 3D printing industry may have been bruising, but they served an important purpose: They helped consolidate the industry and concentrate further technology development with the pioneers.

However, all bets are off as key patents related to 3D printing technology have expired (or, are expected to expire in the coming years). A thriving open source community and startups eager for a share of the potentially huge market are expected to keep major 3D printing players on their toes in the coming years. In such a scenario, patent litigation and defense of intellectual property is expected to play a key role in the success or failure of a company.

The 3D printing landscape presents a unique case study for patent litigation. This is because both the industry’s technology and products are susceptible to litigation. Thus, there is potential for litigation against technology (trade secret and patent infringement) and final product (copyright violation).

The rumblings have already started. Stratasys, which acquired Brooklyn-based Makerbot two years ago, filed a case against its Minnesota-based neighbor Afinia for violation of intellectual property. It is a complicated case whose reverberations will likely be felt as far as China, because Afinia uses technology licensed from Tiertime, a Chinese manufacturer with aspirations to become the world’s largest 3D printer manufacturer. Established manufacturers and startups best able to navigate the patent minefield will likely grow, while others will either file for bankruptcy or be acquired. 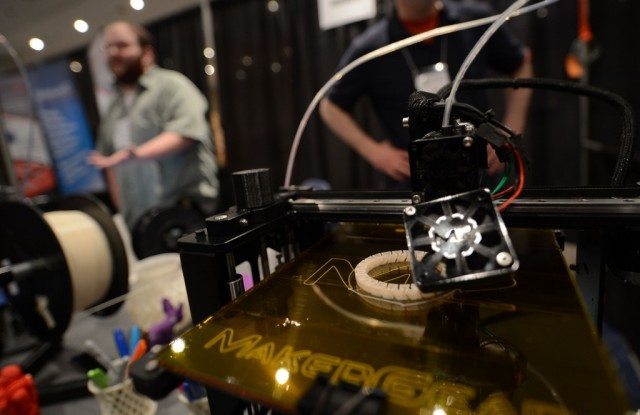 A 3D printer prints an object, during ‘Inside 3D Printing’ conference and exhibition in New York, April 22, 2013. The exhibition features on April 22-23, 2013, tutorials and seminars offering blueprints on how to invest and utilize 3D printing in coming years, as well as leading manufacturers and developers displaying their latest 3D printers and services. (Photo by Emmanuel Dunand/AFP/Getty Images)

For example, despite considerable hype, 3D printing has yet to take off in the consumer industry. Admittedly, Stratasys claims sales growth for Makerbot, while 3D systems has snapped up a number of consumer-facing startups. Even then, their revenue from consumer operations is miniscule compared to revenues from industries. 3D printer manufacturers focused on the aerospace and medical services industries have more chances of growth (and sustainable revenues ) in the near-term future than those focused on the consumer industry.