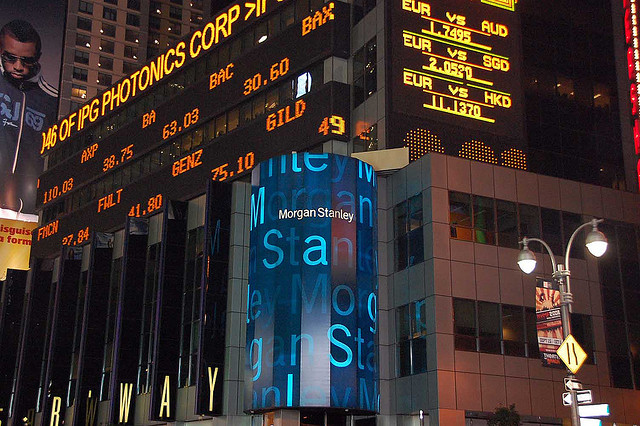 Investors have let Morgan Stanley (NYSE:MS)  know they approve of the steps the investment bank has taken to improve its profitability; throughout 2013, shares of Morgan Stanley rose 64 percent, the greatest stock gain recorded by any of the 10 largest investment banks in the world. The reason for such confidence was Chief Executive Officer James Gorman’s mission to cut costs and improve margins in Morgan Stanley’s brokerage unit. Now, the investment bank’s management is showing Gorman they approve of his direction as well; boosting his compensation package for the past year with an increased cash bonus and long-term incentives.

The 2013 compensation package Gorman, chair and chief executive officer of Morgan Stanley, included 155,207 restricted shares, according to a filing made January 22 with the U.S. Securities and Exchange Commission. That amounts to a $5.06 million stock bonus — a sum nearly double his equity award of the previous year. Those shares come on top of his $1.5 million salary, which was nearly doubled from his 2012 paycheck of $800,000.

In addition to that 800,000 salary, Gorman’s 2012 compensation package was comprised of $2.63 million in stock options and $2.58 million in deferred cash. He also received a $3.75 million long-term incentive, which was dependent on the bank hitting specific performance targets. Further details about his cash bonus and long-term incentives will be made public later this year.

While Gorman has done much to streamline Morgan Stanley, problems linger. Since fourth-quarter earnings were released the morning of January 17, shares have lost 5 percent of their value. The problem was not revenue; thanks to strength in investment banking, global wealth management, and asset management, the institution beat Wall Street’s top-line expectations. Rather, Morgan Stanley’s $1.2-billion legal bill, which caused profit to take a sharp fall, gave investors a source of concern.

Banks in the United States, like Morgan Stanley, are still in the process of stabilizing operations after the lingering havoc created by the financial crisis and legal expenses are the largest remnants of the legacy left by the pre-crisis banking industry on the financial sector. “Our fourth-quarter results demonstrated the consistency embedded in our business model, as revenues increased year-over-year in all three of our business segments,” Gorman said in prepared remarks. “Importantly, we are continuing to address many of the legal issues from the financial crisis.”

Fourth-quarter net income did fall to $181 million, or 7 cents a share, from $594 million, or 29 cents, a year earlier. But that dip was largely the result of massive legal expenses. Comparatively, the institution’s wealth management business proved itself to be a staid pillar of Morgan Stanley’s profitability. That business is the future of Morgan Stanley; focusing more heavily on that business has constituted a large portion of Gorman’s efforts to transform the investment bank into a less risky and more diversified firm with less dependence on trading. Once Morgan Stanley was a powerful trading house, but now it is looking to be a manager of money and adviser of wealthy clients.

Gorman has envisioned wealth management to be a stable source of future revenue and profits for Morgan Stanley. Revenue at the institution’s wealth management division increased by 12 percent from the fourth quarter of 2012, while client assets were 13 percent higher than a year ago even though the bank slimmed down its brick and mortar operations by closing 45 retail locations. Meanwhile, as revenue climbed to a record $3.73 billion, pre-tax profits rose 26 percent to $709 million from the year-ago quarter. This is the division that is expected to drive Morgan Stanley profits in the coming years.

The wealth management division’s brokerage unit is important for that future success; it provides the firm with a deposit base that the bank can use for lending in products, such as mortgages, to its wealth management clients. For next year, Morgan Stanley is shooting for a 70 percent loan-to-deposit ratio, an increase from 2012’s 55 percent ratio. That growth, according to Chief Financial Officer Ruth Porat, will be the biggest drive of improvement in Return on Equity.