2019 GMC Sierra: Everything You Need to Know About the New Model

Pickup trucks have dominated the sales charts in America for decades. While Ford F-150 has been the undisputed champion over that period, GM’s Chevy Silverado and GMC Sierra have not been far behind — especially in recent years.

In 2018, both of GM’s full-size pickups debuted as all-new vehicles for the 2019 model year. While Silverado continued targeting the workaday pickup segment, Sierra kept aiming higher, with Denali bringing carbon fiber and other high-end details to the segment. Here’s everything you need to know about the 2019 GMC Sierra.

If you think pickups couldn’t get any bigger, the new Sierra has news for you. Its dimensions have increased in just about every way for the 2019 model year.

Since this truck is all about comfort, the upgrades make sense, especially in the back seat, where passengers get another 3 inches of legroom. Whereas that space would be for a work crew in the Silverado, here it’s for family and friends.

Next: Larger dimensions have an impact on its look, too. 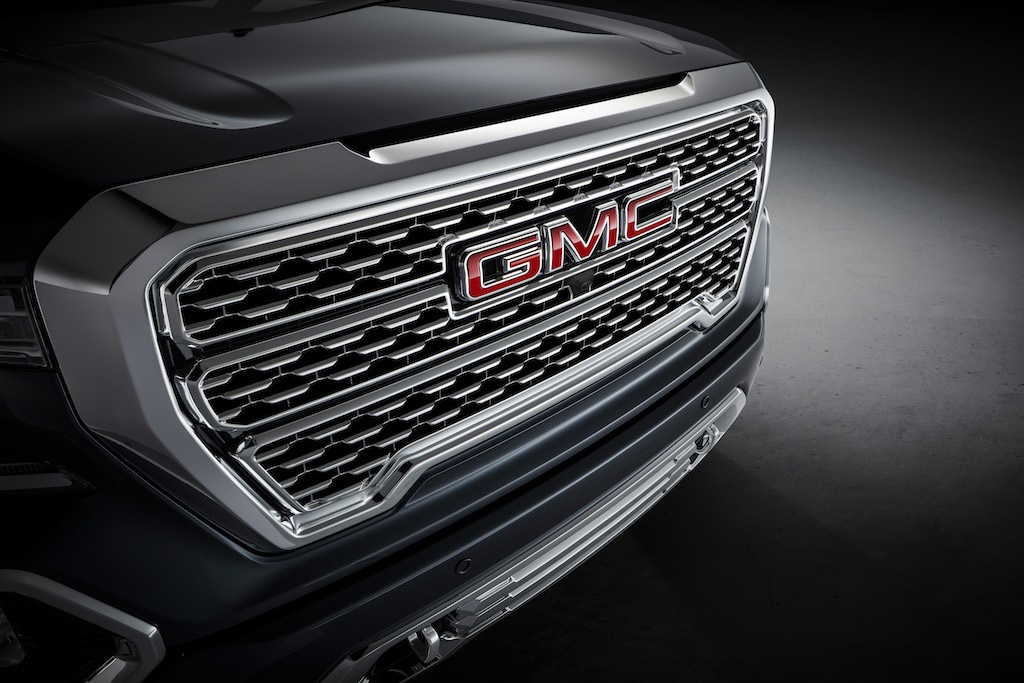 By pushing Sierra’s wheels to the corners and increasing its dimensions, GMC designers helped shaped the ’19 model’s new look. It sits taller and looks a bit more imposing because of the changes.

In the front, you’ll find a new chrome grille and vertically oriented fog lights among the noticeable changes. Out back, Denali badging is more pronounced so owners can make sure everyone gets the idea. 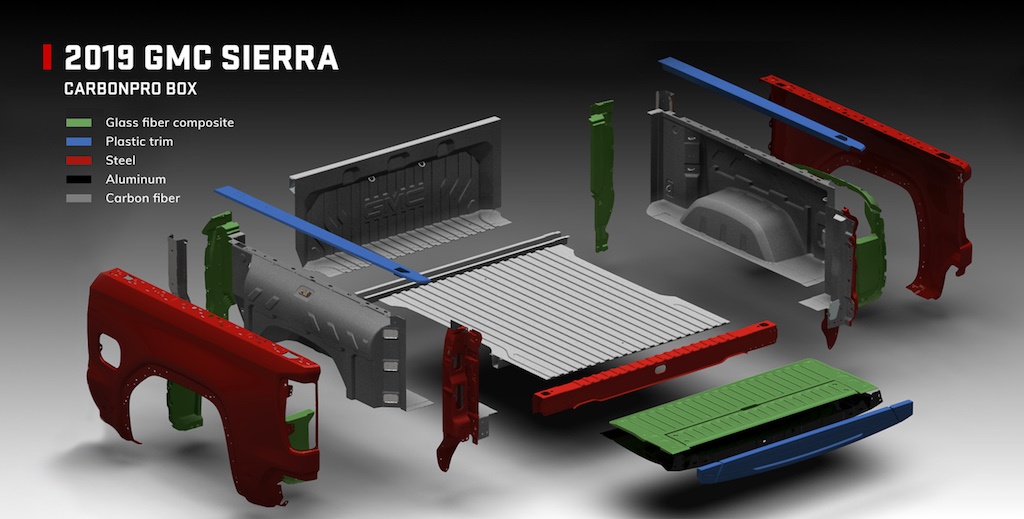 Truck manufacturers have found ways to deliver added power and size in their trucks without increasing weight in recent years. The obvious example is Ford F-150’s switch to aluminum — one which didn’t impact sales in the slightest.

In the 2019 Sierra’s case, GMC dropped over 350 lbs. in the new model. That weight reduction came from the use of carbon fiber and aluminum in various aspects of the truck.

Next: The innovative tailgate separates the new Sierra from the pack. 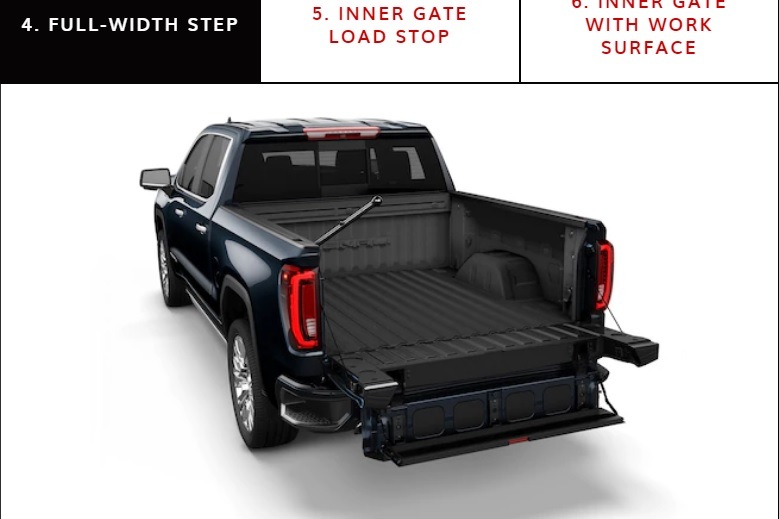 With the debut of the MultPro Tailgate, the ’19 Sierra brings bona fide innovations with it as well. You can position the gate in six different ways, using it as a step, a seat, or a work table (among other things).

GMC held an event for its new tailgate before the 2018 New York Auto Show, and it’s easy to how it would be a selling point for premium truck consumers. It comes standard in Denali and SLT models.

Next: New engines arrive as well.

5. A diesel 6-cylinder and other new engines 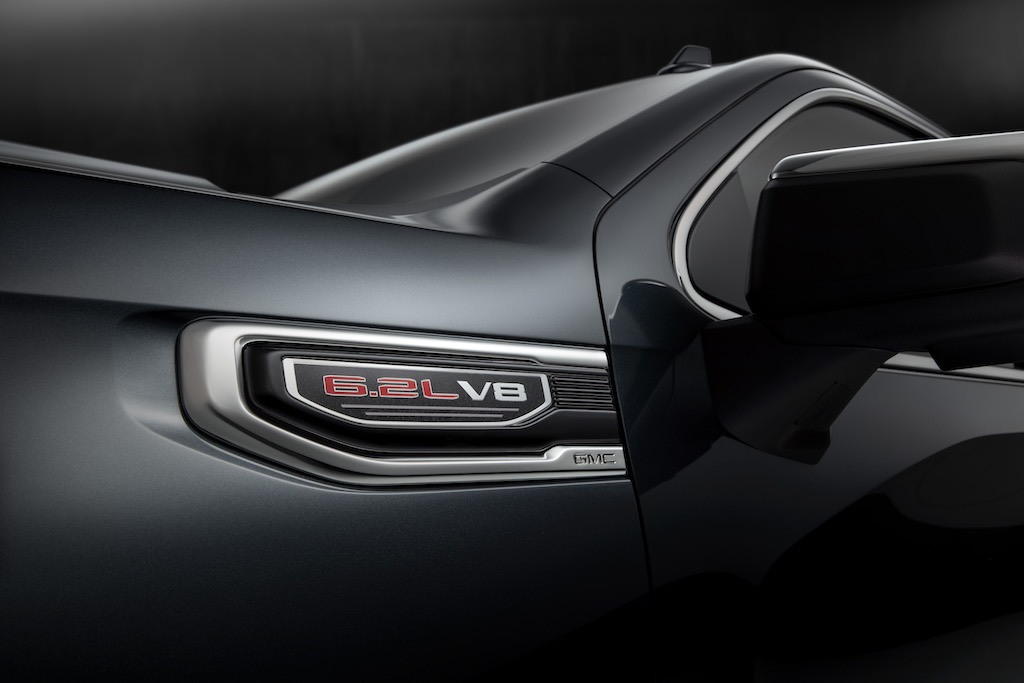 While GMC will offer new versions of the 6.2-liter and 5.3-liter gas engines, the 3.0, six-cylinder turbo-diesel engine is a first for this model. Bot the diesel and the 6.2 will get a 10-speed automatic transmission, while the 5.3 will get the eight-speed auto. 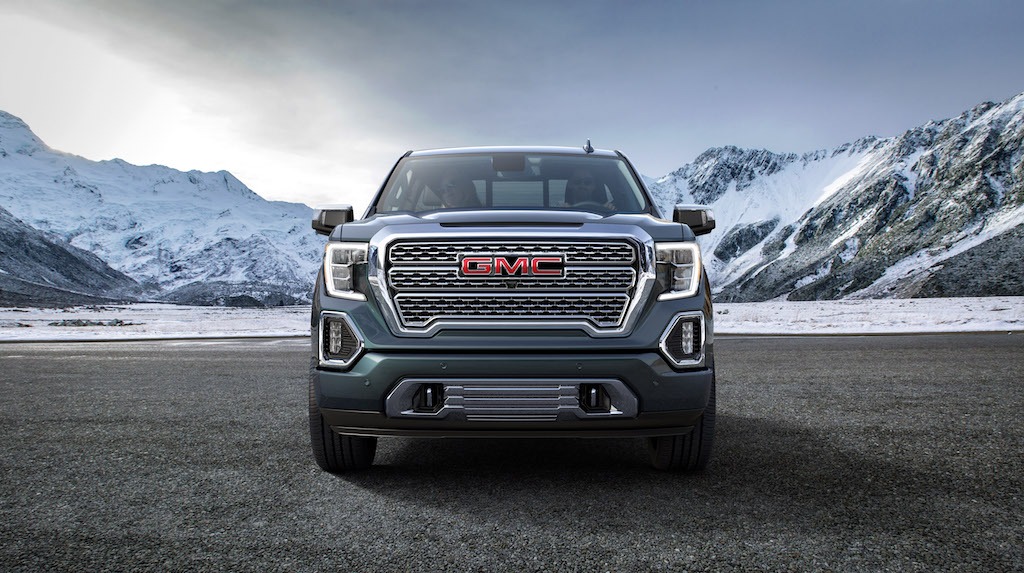 Another first for the 2019 Sierra is the off-road model that is the first of the brand’s AT4 line. It gets a 2-inch suspension lift, off-road Rancho shock-absorbers, a standard V8 with four-wheel drive, and special tires for trail runs.

Meanwhile, it gets a darker tint on the exterior and special badging to go with a different interior trim. The MultiPro Tailgate comes standard. 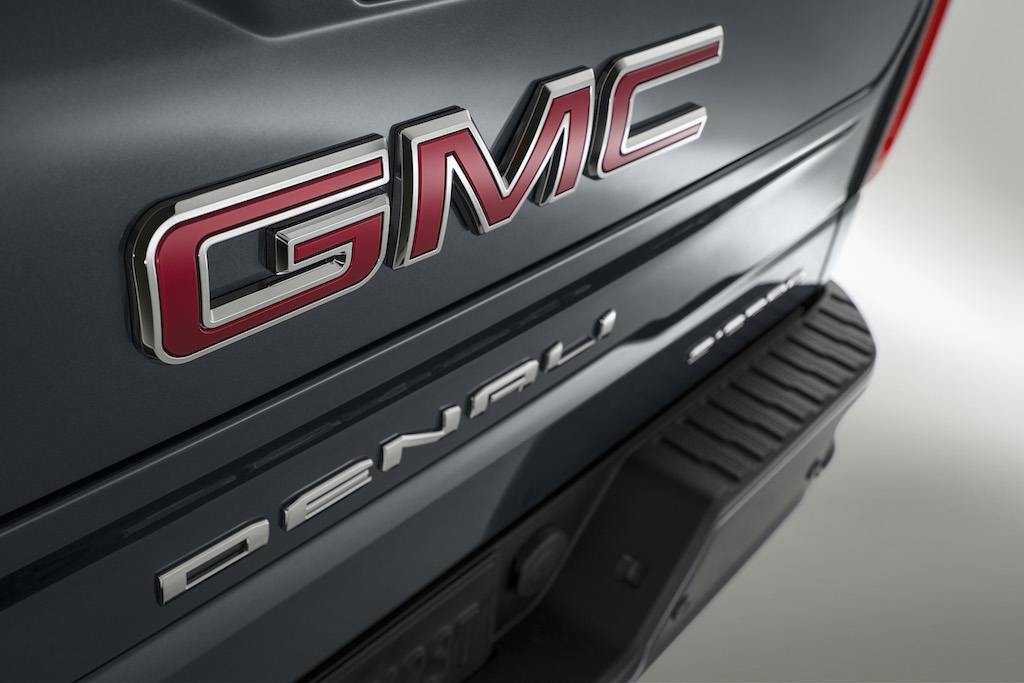 If everything sounds Denali-centric here, it’s because that’s what GMC truck buyers want. According to the manufacturer, nearly 90% of Sierra crew cab sales are either SLT (the top base trim) or Denali.

There’s big profit in these premium pickups, and GMC went bigger and more luxurious in every aspect of the new model.

Next: Towing will be even easier. 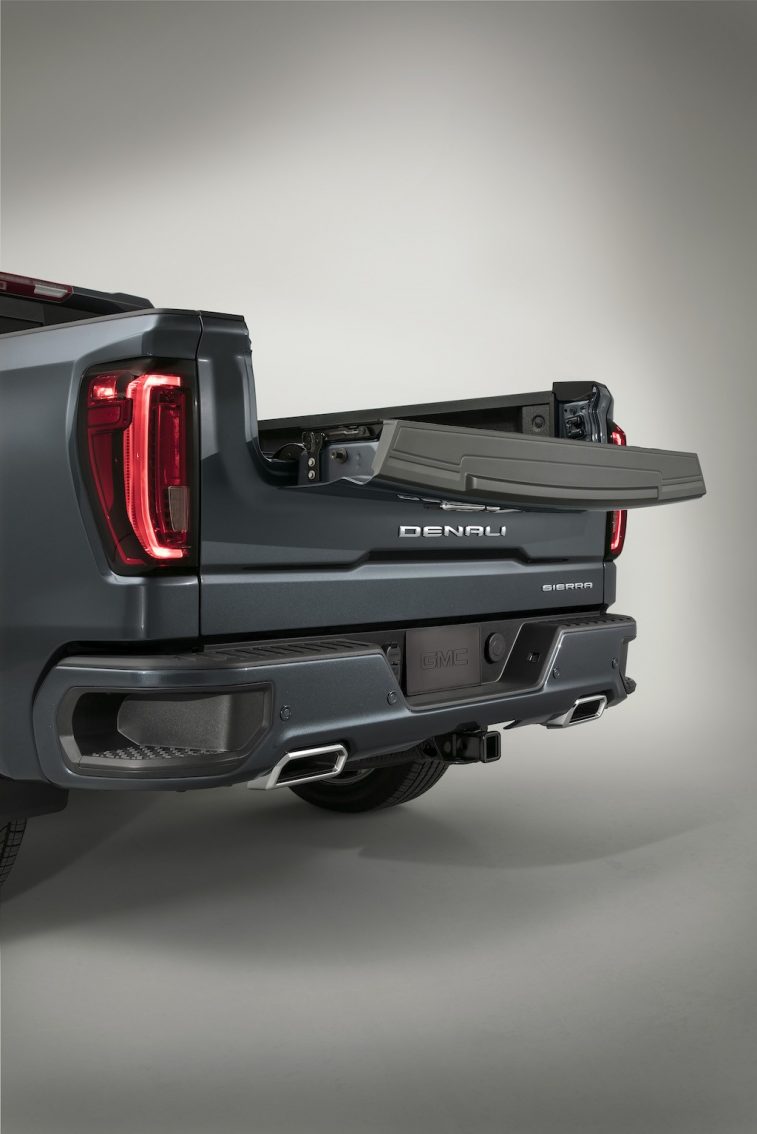 We’ve experienced the towing capabilities of the ’18 Sierra firsthand, and GMC will build on that strength with the ’19 model. It starts with the ProGrade Trailering System and app standard on Denali and SLT editions.

This system will give drivers a pre-departure checklist and help with trailer light checks and other diagnostics before you head off down the road. You can access most of these features on the GMC app with an Android or iOS phone.

Next: Wait for the price tag. 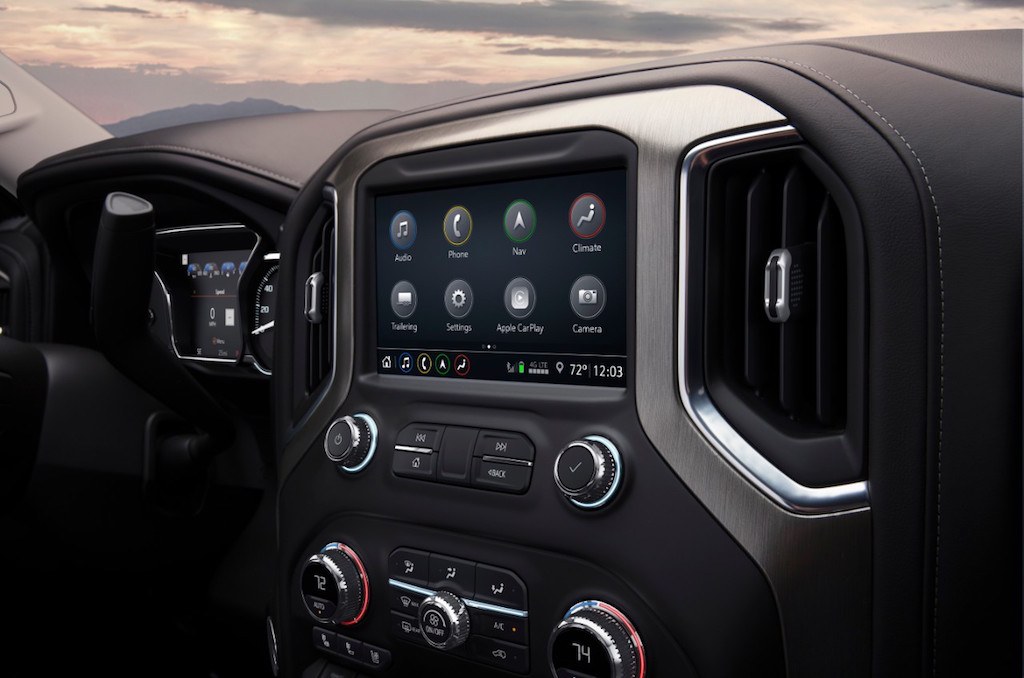 As per usual, consumers will see the ’19 prices arrive closer to their debut (likely late in the summer).

Next: They’ll be ready for Christmas. 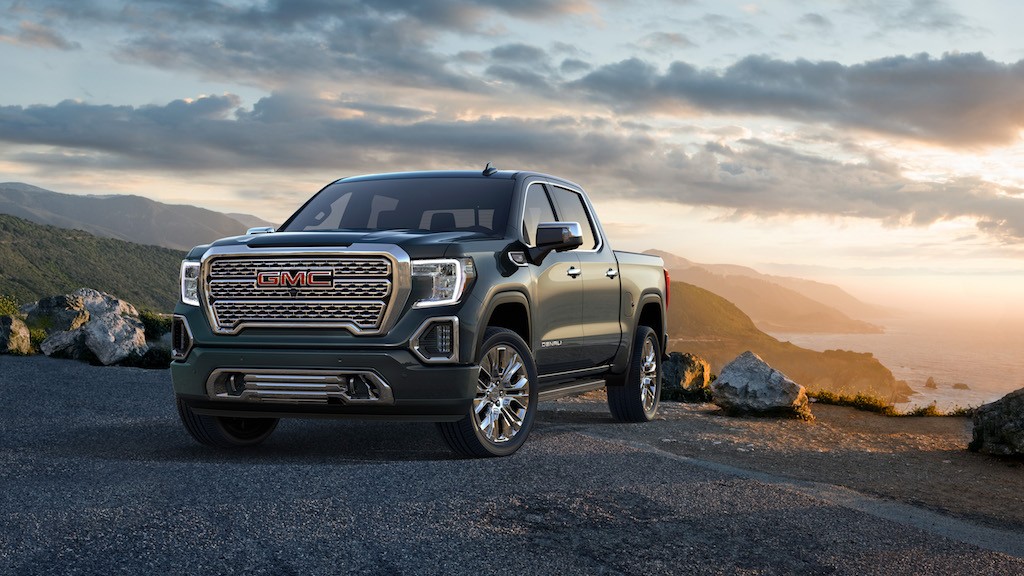 GMC says the new Sierra will be in dealerships by fall, and that includes the Denali and AT4 editions.

Until then, you can expect to see discounts on the capable 2018 models. (At the start of June, five-figure discounts were on the table.)