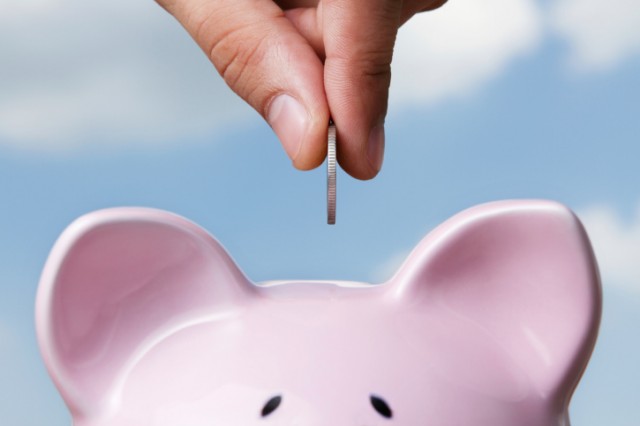 Americans are not known for their prudent saving habits. If anything, we’re renowned for being the largest consumer market in the world. We work hard to buy things we don’t need, and when we can’t afford something, we simply use debt. However, the situation with retirement savings may be less dire as the next generation focuses on the future.

While many Americans could certainly improve upon their retirement planning, there is significant progress taking place for those with jobs and 401(k) plans. Let’s take a look at three charts that detail the current status of 401(k) plans in America, courtesy of a new report from Bank of America Merrill Lynch. 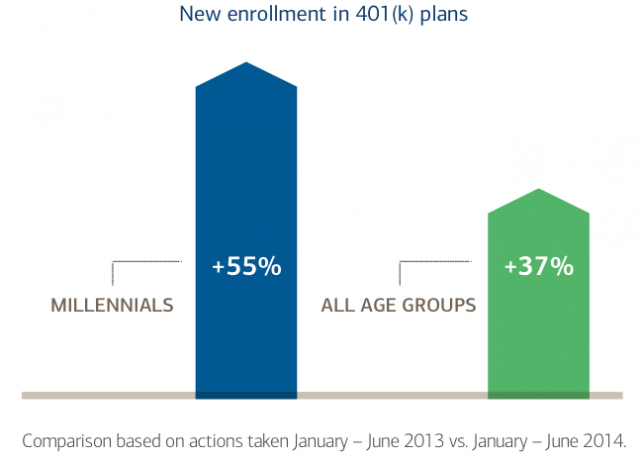 While millennials did not suffer from the stock market crashes like their parents did, they still face unique economic challenges. Millennials graduated from college with record amounts of student debt, only to face the worst financial crisis and job market since the Great Depression. They are delaying families and homeownership in pursuit of other goals, but they realize the importance of saving for the future.

Millennials care more about retirement than you probably think. Bank of America’s 401(k) Wellness Scorecard finds that the number of first-time contributors increased 55% among millennials, compared to 37% among all age groups. Millennials now make up 20% more of Bank of America’s total contributor population than they did at the midpoint of 2013.

The report explains, “Millennials’ saving behaviors are critical, given the potential that this generation may need to cover the majority of their retirement expenses. Recent research by Merrill Lynch and Age Wave found that for retirement, millennials expect to rely primarily on personal savings and income, while other generations see Social Security and pensions funding most of their retirement.” 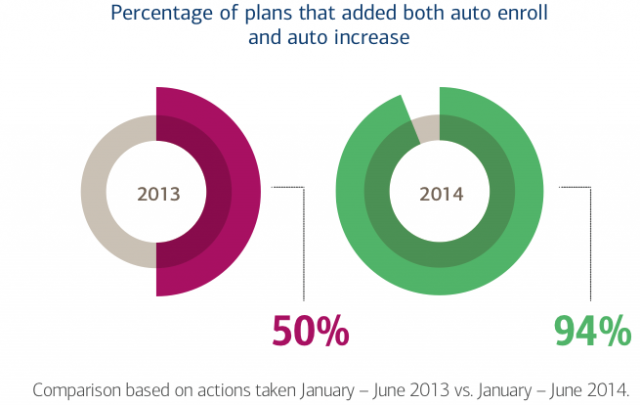 2. Automation is a game changer

Faced with a complex choice or uncertainty, many individuals often take the “no decision” option. In the case of a voluntary retirement plan, which requires that a participant take action in order to sign up, the “no decision” choice is a decision not to contribute to the plan. This problem is being solved through a growing number of employers using automatic enrollment features in their 401(k) plans.

Adopting an automatic enrollment feature takes the action many employees are unwilling to take, but still allows them to opt out of the retirement plan if desired. Employers are also using auto-contribution increases, which automatically raises how much an employee places aside for retirement each year. As of the end of June, the number of plans combining auto-enroll and auto-contribution increases grew 19% year-over-year. In fact, 94% of all plans under Bank of America’s client base use both auto features, compared to only 50% a year earlier. 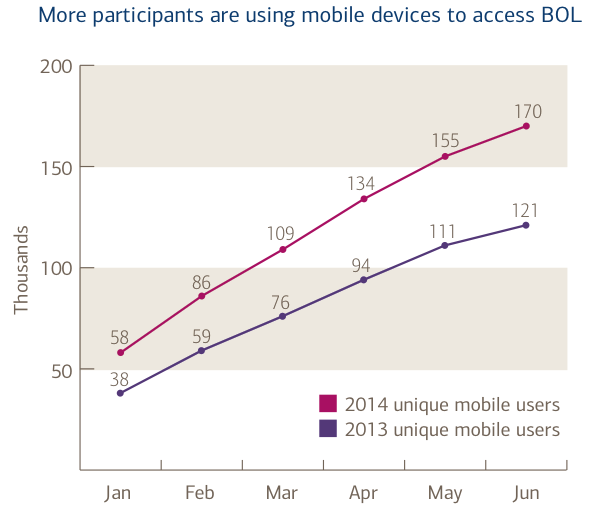 3. Welcome to the digital piggy bank

Technology is not only playing a larger role in our daily lives, but also with retirement planning. As the chart above shows, more participants are using Bank of America’s Benefits OnLine Mobile smartphone platform. As of the end of June, the platform had 170,000 unique mobile users, up 41% from 121,000 unique mobile users a year earlier.

“More employees are using mobile devices to engage with their plans, demonstrating the appeal of convenient, easy-to-access information,” explains the report. “Plan sponsors are continuing to see the value of mobile technology to reach hard-to-engage employees, such as those in industries with limited access to desktop computers. Providing mobile access to plan information is also the ideal way to reach millennials.”