3 Essentials Missing From Many Retirement Plans

Work is a major part of our lives. From the moment we reach adulthood (and sometimes even before adulthood), most of us find a job and we work for the next 40 or 50 years until it’s time to retire. Retirement is thought to be a reward for working hard during all of those years. We accumulate savings so we can enjoy those final chapters in our lives without having to worry about money, as for the average person, money is a daily concern.

Perhaps, retirement savings should be as easy as putting away a percentage of our income into a savings fund and then collecting small increments of this savings once we retire — up the mountain and then back down. It’s not exactly that simple. Tax legislation, the various types of retirement accounts, contribution limits, Social Security laws, and pricey medical care make this simple concept — save now so we can enjoy retirement later — much more complicated.

Since we have so many factors to consider — all of which have a role in determining how well we save, the return we earn, and how well we maximize and preserve our money — we try to make the best decisions possible. Lincoln Financial Group conducted a study on the underrated impact of taxes on retirement. In the 2013 study, Lincoln examined the habits, knowledge, and behaviors of individuals between the ages of 62 and 75 with incomes in excess of $100,000.

Using data from the Lincoln Group study, we found a few common must-haves that appear to be missing from a high percentage of retirement plans.

Many future retirees think costs like discretionary expenses and home repairs are the highest costs during retirement. When Lincoln asked pre-retirees about what they thought their highest expenses would be during retirement, the top answers among survey respondents were home mortgages, healthcare, and travel and leisure.

In reality, around $1 out of every $3 spent by high-income retirees goes to taxes. Taxes are the largest source of spending for retirees in the above $100,000 earnings group, accounting for 31.38% of overall spending. 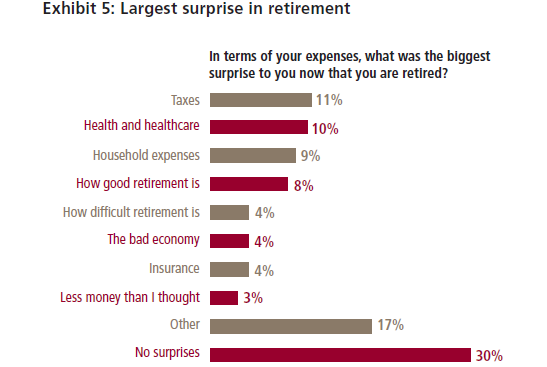 With the recession resulting in losses for millions and changing legislation impacting several facets of retirement planning, discussing a retirement plan with a financial advisor is a must. A good advisor compares every plausible scenario, and finds the most profitable plan for each individual. This, of course, is different for everyone.

For instance, people often hear about how converting to a Roth IRA is an effective tactic for minimizing tax liability. The Lincoln study found that only 30% of retirees were familiar with Roth IRA conversion rules. An advisor can help sort through the information as converting isn’t always best for everyone, and even when it is an ideal choice, gradual conversion may be a more effective option.

Those who use a financial advisor have a higher level of confidence in their retirement plan than those who do not use an advisor. The study found that 75% of higher income pre-retirees who use an advisor had confidence in their retirement savings, compared to only 59% who do not use a financial advisor. Most pre-retirees simply do not have the time to devote to learning every rule and regulation. Those with a good financial advisor have a resource available to answer their inquiries and educate them on general topics, like tax policy and withdrawal strategy, and also on investor-unique topics, like conversion and account choice.

The income and spending habits of a retiree are different than those of a working individual. Bureau of Labor Statistics‘ spending data indicates housing is the largest expense for consumer units during their working years. During these years, transportation, personal insurance, and pension costs are also high. The primary source of income are wages and salaries, and investment and dividend incomes account for only a small percentage of annual income for the average worker.

During retirement, Social Security disbursements are the most common source of income as 81% of survey respondents cited SS as a primary income source. Sixty-five percent of those surveyed cited salaries as a main income source, indicating a large percentage of working retirees. Pension and retirement plan distributions and investment income were also among the most common sources of income for retirees.

As for spending during retirement, federal income tax is the highest expense for retirees, with the average person in the survey spending $16,625 annually. A mortgage was second on the list, followed by  transportation, food, and then real estate taxes. The retirees surveyed spent more on vacationing than they did on healthcare. 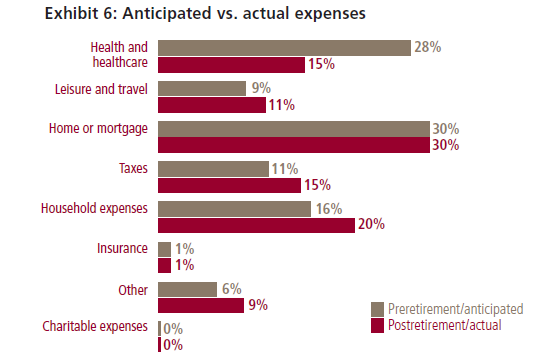 The transition from a mindset of wealth accumulation to wealth preservation is an adjustment. Since we spend our lives continually earning, living on a set amount is difficult for many and it requires strategic planning. A good plan, in addition to mapping out withdrawals and an exact budget, provides a cushion for the adjustment period, anticipating and allowing for a few mistakes along the way.