3 Alarming Facts About Debt You Have to See to Believe 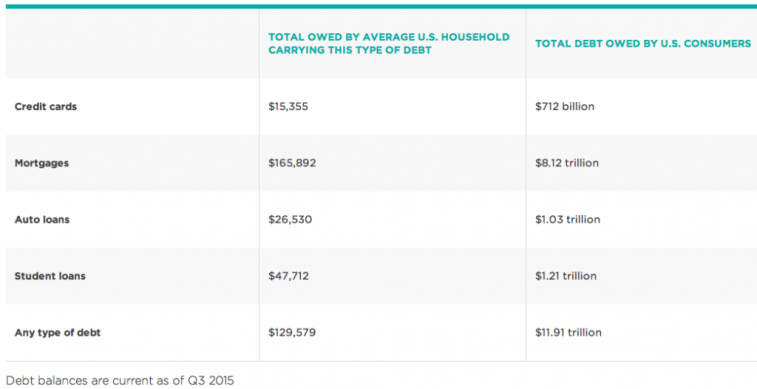 How much debt we owe | Source: NerdWallet

Using debt to fund our daily lives is the status quo in America. Everything from cars to clothing can now be paid for with debt. Americans should know plenty about borrowing money, but new research from NerdWallet finds that isn’t always the case. Let’s take a look at three disturbing facts about debt.

1. We have more credit card debt than we think

You’d think credit card users would know how much debt they carry. After all, statements come every month like clockwork. Yet consumers vastly underestimate or underreport how much they owe. Lender-reported credit card debt was 155% greater than borrower-reported balances in 2013, resulting in a difference of more than $415 billion. Perhaps Americans are too embarrassed to admit their charging habits. Seventy percent of Americans in NerdWallet’s analysis say there is a greater stigma around credit card debt than any other type.

“There are plenty of reasons why consumers might underreport credit card debt. Some don’t know how much debt they actually have. In our survey, 23% of people with a credit card say they have been surprised at least some of the time by their bill,” explains NerdWallet. “This suggests that consumers struggle to keep track of their balances. It’s also possible that consumers aren’t reporting balances they’re planning on paying off. But 13% of consumers with credit cards say they have forgotten at least sometimes to pay their bill, so those planned payoffs might not be happening.”

2. Our incomes are failing to keep up with our liabilities 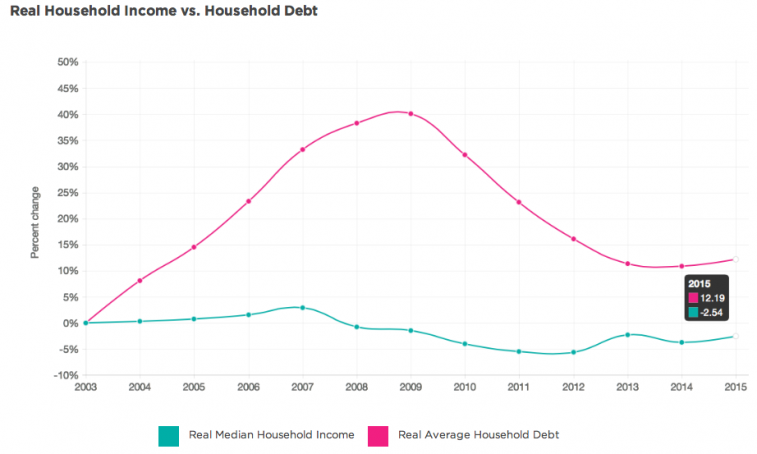 Living the advertised American Dream is not cheap. College. House with white picket fence. Reliable cars. All these things cost money. Unfortunately, incomes are not keeping pace with price tags. Household incomes have increased 26% in the past 12 years, while the cost of living has gained 29%. Only three of the major spending categories haven’t outpaced income growth: apparel, recreation, and transportation. This offers little help considering apparel and recreation are typically small budget items.

“While 3% doesn’t seem like a significant difference, this gap becomes much more significant for Americans that have acute or chronic health problems, or live in a city with a high cost of living, or are attending college. It makes perfect sense, then, that debt has increased during this time. The cost of living has simply outpaced income,” says Sean McQuay, NerdWallet’s resident credit card expert and former strategy analyst at Visa. For example, medical costs have surged 51% in the past 12 years.

Lagging incomes help fuel debt accumulation. As the chart above shows, household debt has grown 15% faster than household income since 2003, adjusting for inflation. On the positive side, this is a significant improvement from the 46% difference seen in 2009, during the Great Recession. 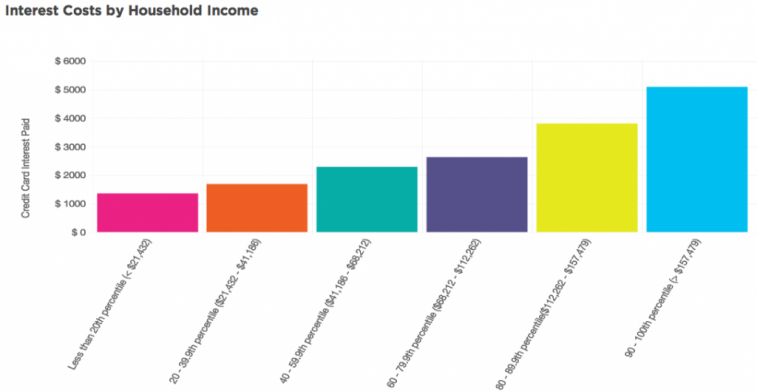 When people say “more money more problems,” they’re apparently talking about interest payments. The average household with debt pays $6,658 in interest per year, representing 9% of the average household income. Not all interest payments are necessarily bad. For example, debt can allow you to purchase a home without having to save up the full cost upfront, Nerd Wallet notes. But, few can argue that credit card debt is beneficial, considering rates are usually in the double digits. Low mortgage rates may also entice Americans to buy more house than they really need or can afford.

“Just making more money doesn’t solve debt problems. In fact, according to our findings, debt loads increase as income does; therefore, annual interest payments are larger,” says the report. “This makes sense, as higher-income individuals are able to more easily obtain higher credit limits, giving them more room to rack up big balances. Low-income earners, on the other hand, don’t have access to a lot of credit. Still, the difference is striking.”