The U.S. economy and financial markets just finished another solid year of positive headlines. Gross domestic product posted its best quarter in a decade, jobless claims reached their lowest weekly average in 14 years, the unemployment rate fell below 6% for the first time since 2008, the Dow Jones Industrial Average climbed higher for the sixth consecutive year, and the S&P 500 rose by double digits for the third straight year. Yet millions of Americans with stagnant wages feel like the recovery never occurred.

In last night’s State of the Union address, President Obama highlighted the struggles of the middle class. “Will we accept an economy where only a few of us do spectacularly well? Or will we commit ourselves to an economy that generates rising incomes and chances for everyone who makes the effort?” He later added, “That’s what middle-class economics is — the idea that this country does best when everyone gets their fair shot, everyone does their fair share, and everyone plays by the same set of rules.”

The middle class will likely remain a focus as the average American and everyone else not dining on caviar keeps falling further behind on wealth accumulation. In December, a new analysis published by the Pew Research Center found that the median wealth of the nation’s upper-income families ($639,400) was nearly seven times the median wealth of middle-income families ($96,500), the widest gap in recorded history.

Of course, this trend does not apply to everyone. Some members of the middle class continue to find ways to improve their personal financial situations. However, as a whole, compensation growth is dismal or outright depressing. Let’s take a look at three charts from the Economic Policy Institute (EPI) signaling that the middle class is overdue for a pay raise. 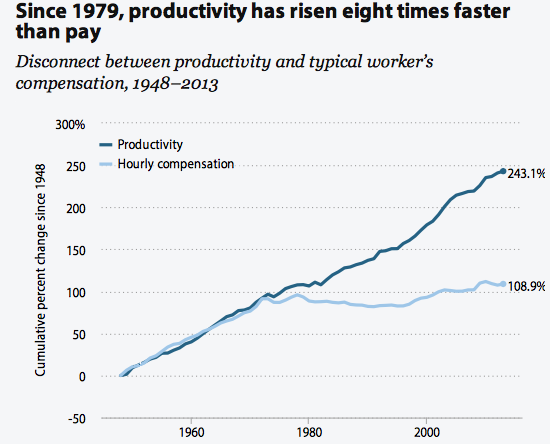 The EPI notes that this breakdown has allowed capital owners, rather than workers, to claim a larger share of income, allowing the wealthiest Americans to claim a larger share of overall wages and assets. Americans are not known for their prudent saving habits, but if wages remain stagnant, wealth accumulation will become increasingly difficult as daily living expenses rise. 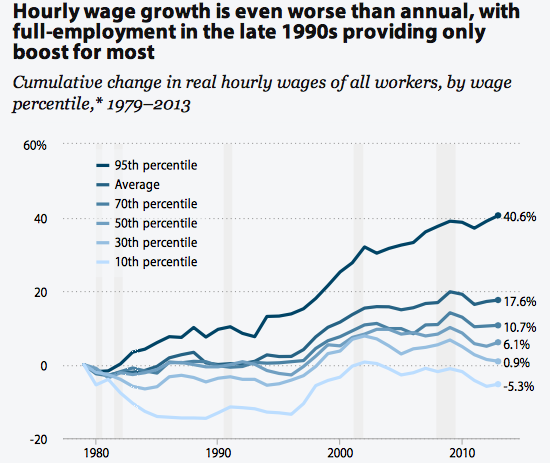 Hourly wages for the bottom 70% of American workers increased less than 11% over the 34-year period between 1979 and 2013. That equals an annual average of only 0.3% or less. Making matters worse, the majority of the dismal wage growth came from the boom years seen in the late 1990s.

“Furthermore, take a look at the late 1990s: Nearly all the wage growth of the bottom 70% of wage earners happened in that brief period when labor markets got tight enough–unemployment fell to 4% for a two-year spell in 1999 and 2000–to finally deliver across-the-board hourly wage growth,” said the EPI in its report. 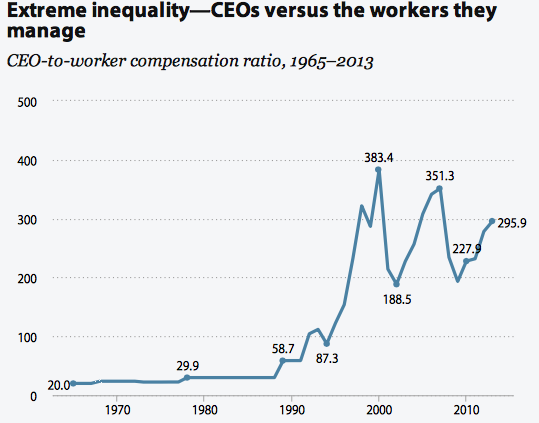 We all know life isn’t fair. Rising above others through innovative ideas, hard work, and sacrifice is what makes the engine of capitalism run. However, the eye-popping paydays and golden parachutes enjoyed by CEOs of large American corporations relative to other workers is unmistakeable.

In 2013, CEOs at the 350 largest public U.S. firms made nearly 300 times typical workers’ pay. While this ratio has been volatile in the past decade with the help of stock market crashes, CEO pay never fell below 188.5 times the average worker. In comparison, these CEOs only made 20 times what typical workers made in 1965.