The currency has been plagued by a number of hacks, scandals, and unsavory news coverage. To add to its troubles, the largely unregulated currency is under New York’s Department of Financial Services’ scanner for future regulation. The list of skeptics about the digital currency is also growing. Greg Baxter, Citigroup’s senior vice president for digital strategies, is the latest addition to that list.

In a panel about Bitcoin last week, Baxter said that the currency’s economics were “inherently flawed” and that it was not ready for mass adoption. “People are paid a percentage of the value of the currency for mining — what happens when you hit the limit and those people no longer want to mine because there’s no economic incentive? Nothing underpins the economics of it,” he said. In simple words, he was referring to method for Bitcoin mining. The currency is mined by a network of computers and servers that use algorithms to solve complex puzzles. Currently, miners are paid in Bitcoins for their efforts. However, the maximum number of Bitcoins that can be mined is 21 million. Once that limit is reached, Bitcoin miners do not have economic incentive to mine more Bitcoins.

“I think the maturity’s not quite there yet,” said Baxter.

Last year, Baxter’s colleague, Willems Buiter, chief economist at Citigroup, compared Bitcoin to Gold. In Buiter’s analysis, fiat currency, such as dollars, are socially superior to gold and Bitcoin as currencies and assets. “There is no economic or financial sense for a central bank to hold any single commodity, even if this commodity had intrinsic value,” he wrote.

The folks at Citigroup are not the only ones skeptical about the currency. A number of investors, notably Warren Buffett, have criticized Bitcoin as an investment vehicle in recent times.

Here are three things that are wrong with Bitcoin’s economics. 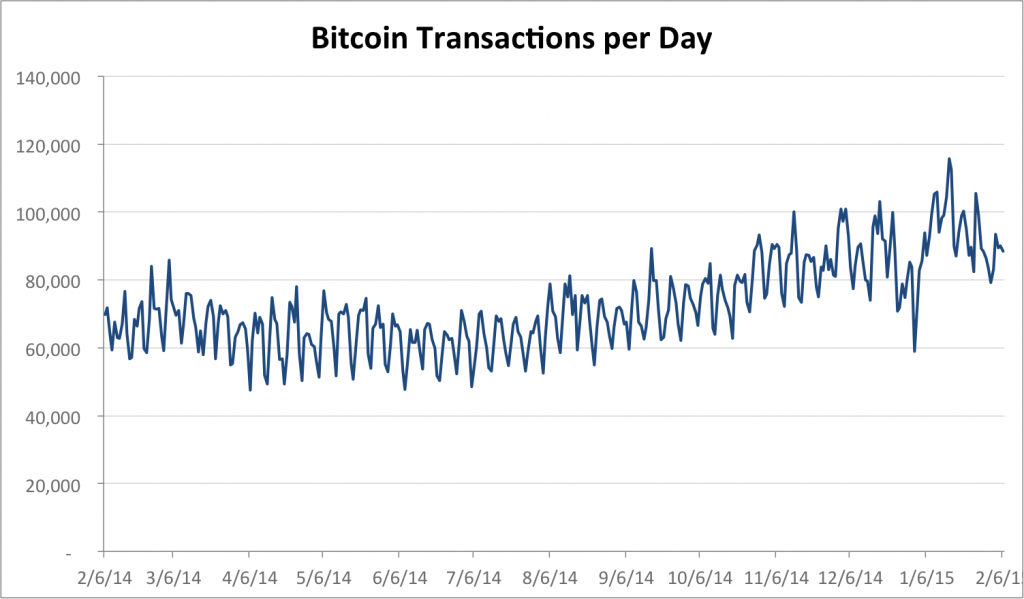 For any currency to be legitimate, it must be trusted as an acceptable form of transaction by a  large number of people. That trust is reflected in the currency’s velocity or the number of times that the currency changes hands through business transactions. In Bitcoin’s case, this number has consistently remained flat over the last year. Even as the number of retailers and large corporations accepting bitcoins has grown, the transaction volume has remained constant (except for a brief spike in March and December last year).

“If you take the value of bitcoin transactions last year, we did that in three hours of trading on a Citi Forex platform,” said Baxter. The low transaction volume seems even more surprising when you consider that Bitcoin uses double accounting, a system of accounting in which a single transaction of debit and credit is recorded as two transactions.

Bitcoins are an attractive speculative instrument because there is a limited number of them in circulation. According to Jeffrey Robinson, author of Bitcon: The Naked Truth About Bitcoin, about 950 people own more than 50% of Bitcoins. This makes the currency susceptible to hoarding.

Robinson has already alluded to the currency as a “Pump and Dump” scheme in which investors can control prices by alternately hoarding the currency (and driving up prices to sell at a high rate) and, consequently, dumping it into the market (to reduce prices to buy the currency at cheap values). Of course, Bitcoin’s cause is not helped by investors like the Winklevoss twins, who have a reputation for being opportunistic and greedy in their financial dealings.

All currencies and commodities derive value from their intrinsic worth. The worth is a guarantee to investors and speculators that they will be able to recoup, at least, part of their investment, if the currency’s price or value crashes. For example, commodities, such as gold, have an intrinsic value because there is a quantifiable effort required in extracting and refining the metal.

Bitcoin suffers on both counts. It has no intrinsic value because it is a digital currency. There are mining costs associated with Bitcoin, such as the cost of servers and electrical power and they have been steadily increasing over the years. However, Bitcoin does not have the practical applications of a commodity like copper or gold. For example, it does not have industrial applications nor can it be fashioned into jewelery after it is mined. In such an instance, one could liken the currency to money. This is because money has no intrinsic value but it is backed by central authorities such as central banks.