3 Reasons Why Good Health Is Crucial for a Happy Retirement 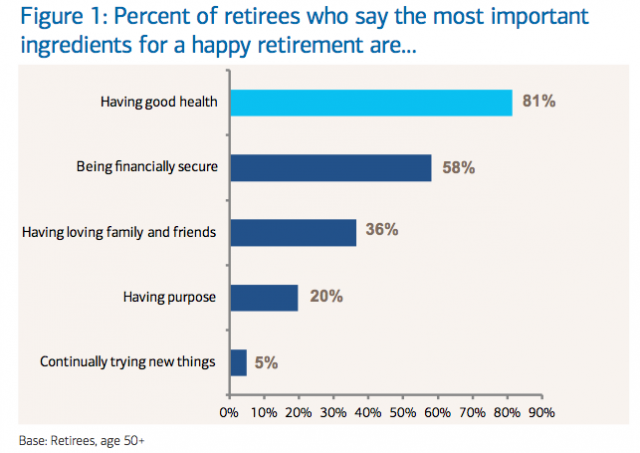 Retirement is a life-long process. Even if you successfully save enough money to retire on your own terms, there is no guarantee that you will truly enjoy your so-called golden years. Several ingredients are needed for a happy retirement, but one is clearly more potent than others.

Health equals wealth, in more ways than one when it comes to retirement. According to a new study from Bank of America Merrill Lynch and Age Wave, 81 percent of retirees cite health as the most important ingredient to a happy retirement. In fact, being financially secure was a distant second at 58 percent, followed by having a loving family and friends (36 percent), having purpose (20 percent), and continually trying new things (5 percent). This recipe is expected to remain intact for years to come as more baby boomers reach retirement.

“As boomers move into their later years, health will be the ultimate retirement wildcard,” said Andy Sieg, head of Global Wealth and Retirement Solutions for Bank of America Merrill Lynch. “For many, health can be the difference between a retirement of opportunity and independence or one of worry and financial challenges. This research makes clear that the convergence of health and wealth should be factored into planning for later life.”

Unfortunately, many people are not considering health matters in their retirement plans. Merrill Lynch finds that nearly eight out of ten respondents with financial advisors have not discussed how health matters will impact retirement. Let’s take a look at three reasons why health is the main ingredient for a happy retirement. 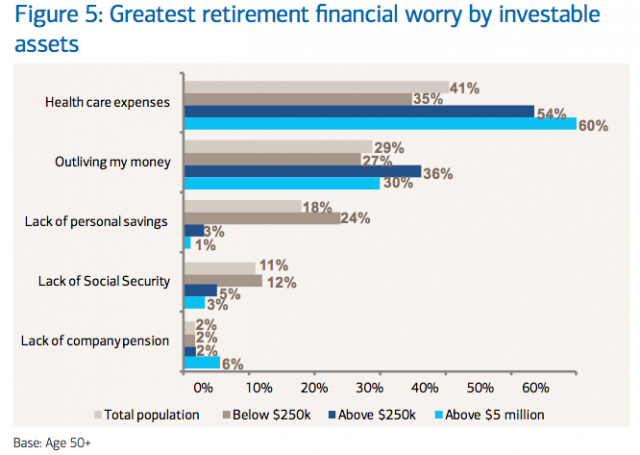 Worrying about health issues can occupy an unsettling amount of your golden years, regardless of your nest egg size. The study finds that 60 percent of respondents above the age of 50 with at least $5 million in assets say health care expenses are their top financial worry in retirement, compared to 54 percent with assets above $250,000, and 35 percent with assets below $250,000.

Making matters worse, health issues and related monetary side effects can extend throughout the family tree. Sixty-six percent of respondents are more concerned about how their spouse’s health issues will impact household finances than their own. Half of respondents also worry about the health costs of their children, while around a third worry about parents and siblings.

“Health challenges can be a double threat to retirement financial security,” said David Tyrie, head of Retirement and Personal Wealth Solutions for Bank of America Merrill Lynch. “Between unpredictable and costly health care expenses and unexpected early retirement due to health problems, planning ahead can be confusing and overwhelming. People are increasingly seeking guidance to help them make informed decisions, for themselves and their families.” 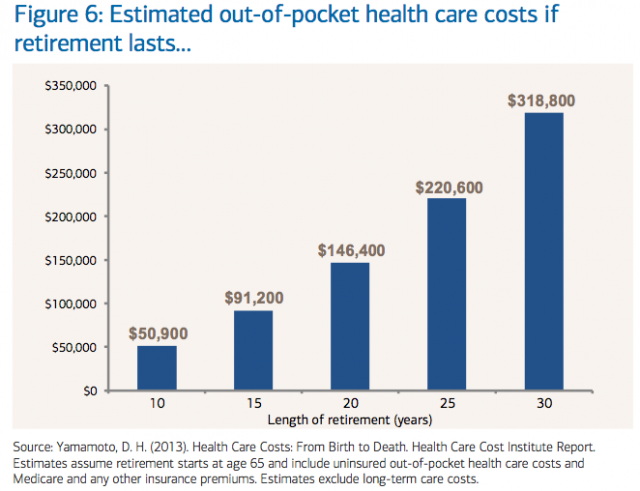 Money isn’t everything in life, but it sure does help. Investing in your health can pay dividends throughout retirement. As the chart above shows, the out-of-pocket health care costs can be staggering and only get worse with age. Assuming retirement starts at age 65, you could be out an estimated $50,900 in only ten years, If your retirement lasts twenty years or thirty years, your costs are estimated to reach $146,400 and $318,800, respectively. With rising life expectancy, the earlier you prepare for these costs, the better prepared you will be.

“As demanding consumers, boomers have redefined nearly every life stage, and the way they approach health and health care will be no different,” said Ken Dychtwald, Ph.D., founder and CEO of Age Wave. “Boomers would be wise to boost investments in their health, through healthy behaviors and lifestyle choices. At the same time, the health care system needs to ensure it is prepared for the aging of this generation – with the proper knowledge, skills, services and science.” 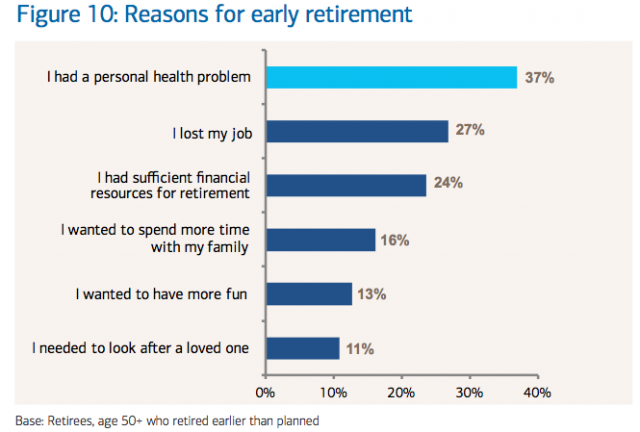 Despite a healthy diet and routine exercising, sometimes health issues still play a larger role in retirement than we plan, which can impact long-term finances. According to the study, 55 percent of retirees actually retired earlier than expected. However, health problems was the number one reason for doing so. Thirty-seven percent say a personal health problem led to an early retirement, followed by losing a job at 27 percent.

What’s the scariest disabling condition? Every generation overwhelming says Alzheimer’s. The report explains, “While chronic diseases can disrupt both health and wealth in retirement, our study revealed that one aging-related disease now stands out from the rest. Overwhelmingly, people of all ages say the scariest disabling condition in later life is Alzheimer’s disease. In fact, people are now more worried about Alzheimer’s than cancer, stroke, heart disease, diabetes, and arthritis combined. Alzheimer’s can impact not just individuals but also their families, and can require years of caregiving and financial help from family members.”