Trust is a rare commodity in today’s post-recession economy. The financial crisis shattered confidence levels across the nation and left side effects that will continue to impact Americans for years, if not decades. Millennials avoided much of the pain that their parents felt from the stock market and housing bubble, but they still have plenty of reasons to be wary of the economy.

Let’s take a look at three reasons why millennials are having a difficult time trusting the economy.

Starting a professional career with a blank financial slate is the exception rather than the norm. The majority of graduates now have at least some college debt upon graduation, which can heavily influence financial decisions. In 2013, seven in 10 graduating seniors at public and private nonprofit colleges had student loans, according to The Institute for College Access and Success (TICAS). Nationally, the average debt for these graduates totaled $28,400, 2% higher than the previous year. At nearly one in five colleges, average debt burdens jumped 10% or more. New Mexico is the only state where the average student debt load is below $20,000.

Debt is the biggest worry among millennials. Wells Fargo finds that 40% of millennials describe their debt as “overwhelming,” compared to only 23% of baby boomers. Furthermore, 56% of millennials are “living paycheck to paycheck,” and 47% are allocating at least 50% or more of their paychecks to various kinds of debts. A college degree once virtually guaranteed a middle-class lifestyle, but degree selection is becoming increasingly important. 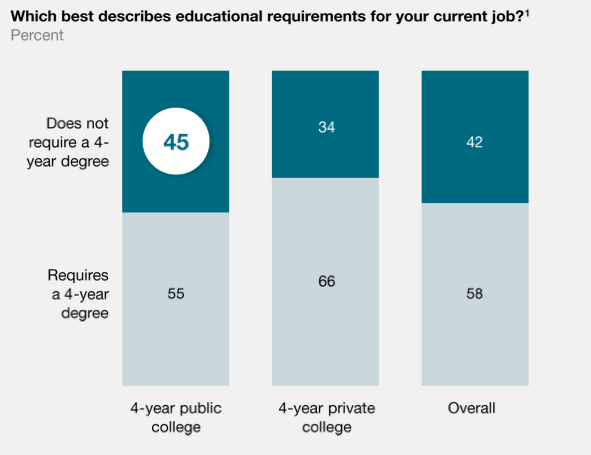 The headline unemployment rate has steadily declined from its peak of 10% in October 2009, when the financial system was on the brink of collapse. However, that does not necessarily mean people are in their ideal employment situation, as nearly half of graduates from four-year colleges say they are in jobs that do not require a four-year degree. This leads some millennials to not only question the economy, but also the long-standing notion that a college degree is a good investment.

The retail and restaurant industries were among the least desired fields for students, but they end up employing four to five times the number of graduates who said they actually wanted to work in those industries. The most popular fields of choice were health and business services, with 35% of students saying they wanted to enter these sectors, yet only 25% found work in these two fields. 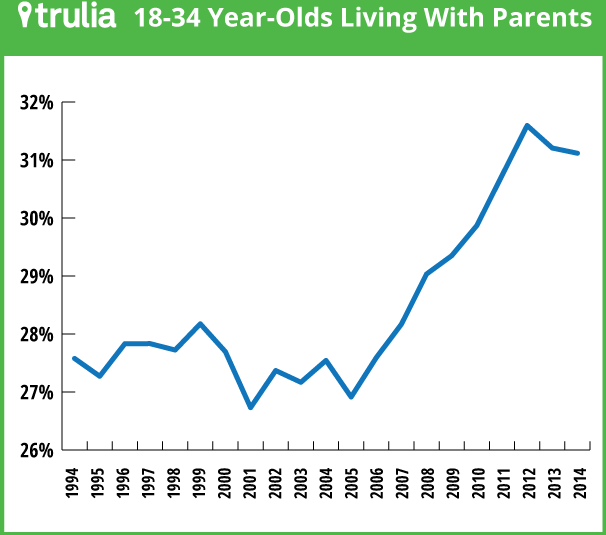 Nothing signals your financial well-being like having to rely on your parents when you’re an adult. The University of Arizona released an update earlier this year on its study of a freshmen cohort group dating back to 2007. More than half the participants — mostly graduates — reported relying on financial support from family to meet current financial demands. Echoing the sluggish labor market finding, nearly half of those respondents were employed full-time.

Although the Great Recession technically ended more than five years ago, the number of millennials still living at home is stubbornly high. In 2014, 31.1% of 18-34 year-olds lived with their parents, down only slightly from the peak of 31.6% in 2012, according to Trulia. Millennials moving out also don’t appear to be forming their own households. Instead, they are likely moving into households headed by siblings or other relatives.

“Here’s the wrinkle though. Even though the percentage of young adults living with their parents ticked down a bit, their headship rate did NOT rise,” explained Jed Kolko, Trulia Chief Economist. “They’re moving out of their parents’ homes, but not forming their own households. The headship rate for 18-34 year-olds fell to 36.6% in 2014, down from 36.9% in 2013, and just slightly above its low of 36.5% in 2012.”