3 Reasons Why Tobacco Is the Most ‘Successful’ Industry in History 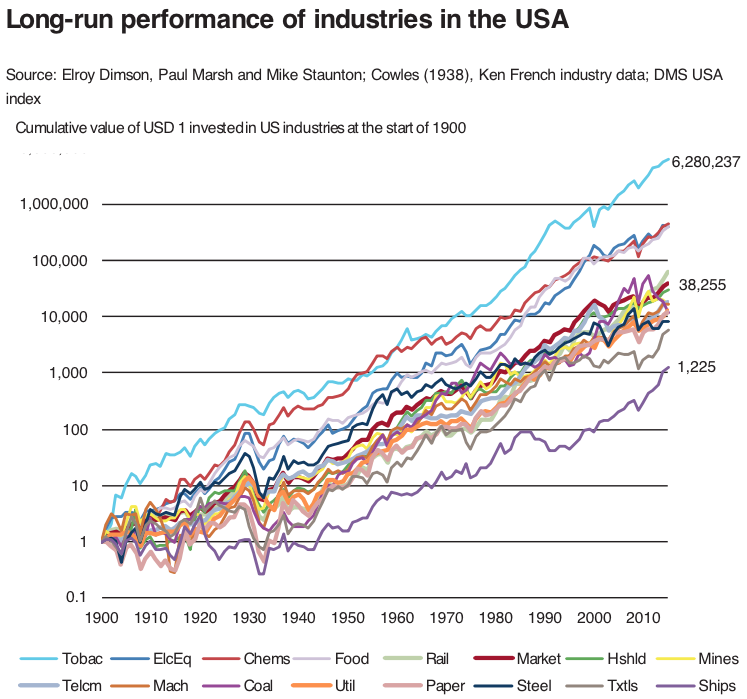 Tobacco seems to be the flavor of the season.

First, there was the bad news. John Oliver skewered the industry for its litigation frenzy in his popular show last week.

Then came the good news. According to a Credit Suisse research report released last week, tobacco is America’s most successful industry. The report states that the average returns from a company listed on the stock exchange was about 10% per year from the period between 1900 and 2010. Tobacco stocks, however, produced annualized returns of 14.6% during the same period. In terms of hard cash, this means that a single dollar invested in tobacco stocks was worth $6.3 million by 2010, while a dollar invested in a stock market index would only be worth $38,255.

That’s a smoking return by any standard.

The achievement is all the more impressive, when you consider that the returns were made in the face of increased taxes, sustained negative press, and a barrage of lawsuits from individuals and corporations. A combination of these circumstances would have killed any other industry.

Here are three reasons why the tobacco industry has been delivering consistently successful returns. 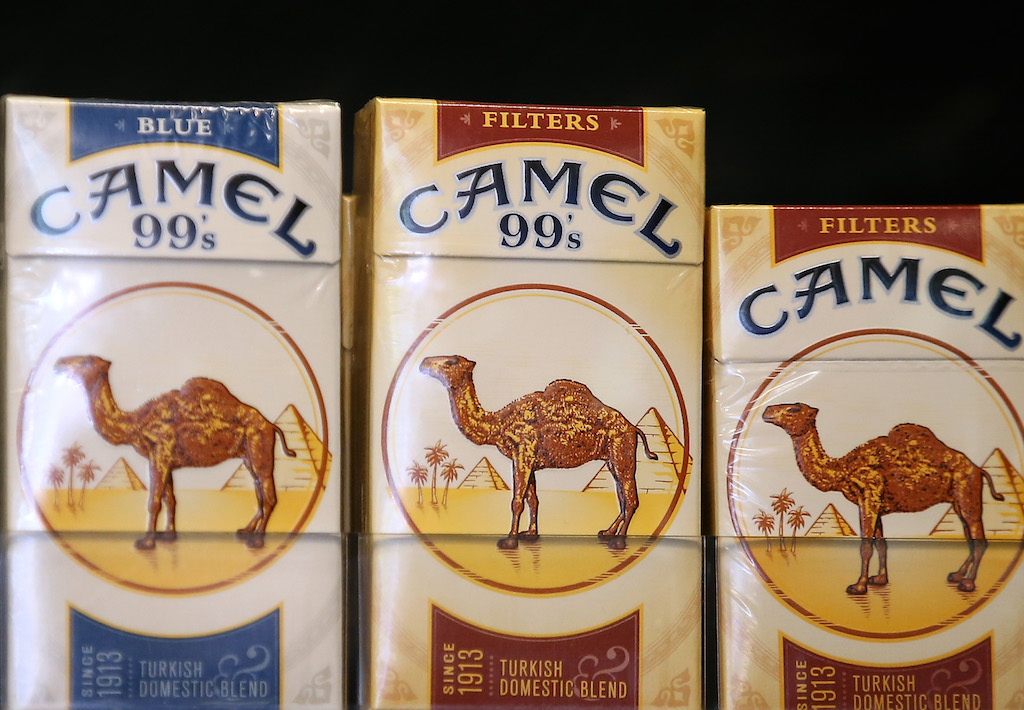 Camel cigarettes, manufactured by Reynolds Amercian, are displayed at a tobacco shop on July 11, 2014 in San Francisco, California. Tobacco giant Reynolds American is reportedly in talks with rival Lorillard Inc. in what is expected to be a multi-billion dollar deal. (Photo by Justin Sullivan/Getty Images)

1. The tobacco industry is an oligopoly

Money website Fool.com states that the tobacco industry has produced handsome dividends because it does not innovate. The reasoning is simple: Research and development costs can bring down net income without producing tangible results that affect bottom lines. But, that reasoning does not delve into the factors that have enabled a non-innovative industry to survive for so long.

The tobacco industry is an oligopoly dominated by a handful of players in the domestic market and international markets. In fact, the U.S. tobacco industry has not seen new competitors for the last 56 years.

This is because there are several barriers to entry in the industry. In addition to the complex supply chain and distribution required from major retail players, new players in the industry would also have to deal with a phalanx of regulations and heavy taxation. As a result, competition within the industry is rare and the incentive to innovate on products and prices is low.

To add to that, cigarettes have an inelastic demand curve. This means that demand stays constant, even in times of recession. Thus, the tobacco industry manages to make profits because product margins improve, even if the overall product volume sold decreases.

2. It passes litigation and tax costs onto customers

It is a fallacy that the tobacco industry has suffered due to the increasing number of lawsuits against them. The industry simply passes on increased litigation and tax costs to consumers and channel partners.

For example, the operating profit per pack was $0.30 in 1998. This was also the time when the industry faced a number of class-action lawsuits from states and individuals. During the same period, the total settlement amount paid by the tobacco companies to defendants equaled $ 1.712 billion or 10.9 cents per pack. Wholesale premium prices for cigarettes increased by 14 cents per piece during this period. Interestingly, the increases occurred despite declines in sales tax and no increase in federal excise tax.

In fact, increased taxation has increased profit share for individual tobacco manufacturers in the tobacco supply chain. Manufacturers also place the onus of promoting their products on retailers because cigarettes can drive sales for other products. 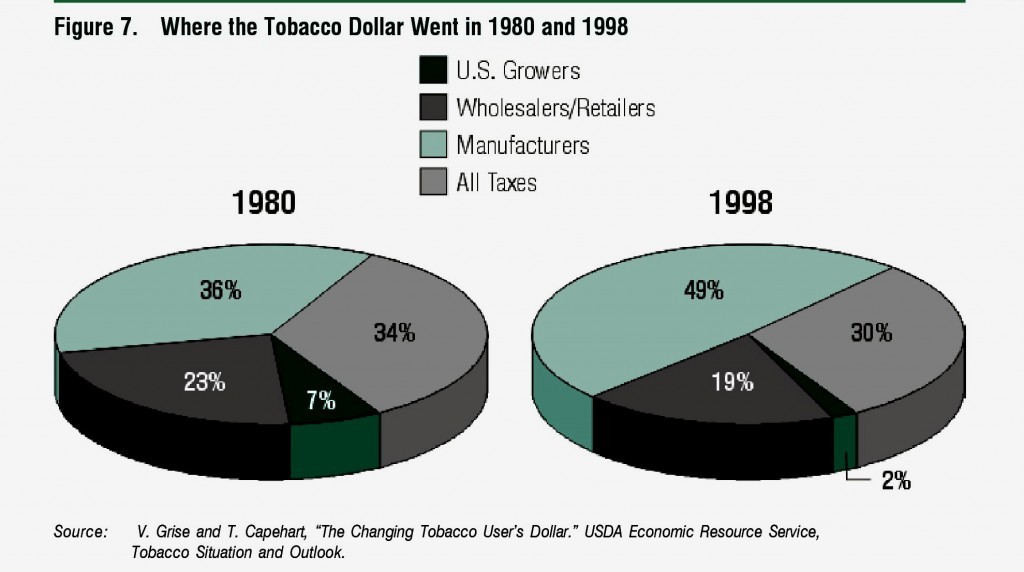 3. It looks to international markets for growth

The tobacco industry has looked outward since the early 1990s, when a number of lawsuits were filed against major players. Since then, Philips Morris International (PMI) — makers of the iconic Marlboro brand — has become the most valuable company in the tobacco industry with a market capitalization of more than $100 billion. As comedian John Oliver outlined in his viral video recently, the company has followed a strategy of aggressive litigation against potential competitors and market restrictive policies. British American Tobacco, another major player in the tobacco sweepstakes, follows a similar strategy while deriving a major part of its revenues from abroad.

But, the party may not last long.

PMI was forced to shutter its factories in the Netherlands and Australia last year due to adverse regulations and weak demand. The company is also struggling to compete in China, where state-run China National Tobacco Company (CNTC) enjoys a near-monopoly status in sales.

The portents for PMI in Philippines, its second-largest market, are not so bright either. The company laid off more than one-tenth of its 6,000 strong workforce there due to “tough market conditions.” These conditions included potentially adverse regulation and intense competition from a local upstart, Mighty cigarettes, which grabbed a significant portion of its market share by underpricing its product.

In its earnings call last quarter, PMI said Asia posted a 7.3% decline in volume and Canada and Latin America slipped by 2.9%. This is not surprising as China, Asia’s largest market for cigarettes, is already contemplating regulation against sale and advertising of tobacco products. A hostile regulatory climate in Asia’s largest economy will adversely affect prospects for large players.