4 Donald Trump Ideas Even Bernie Sanders Fans Can Get Behind 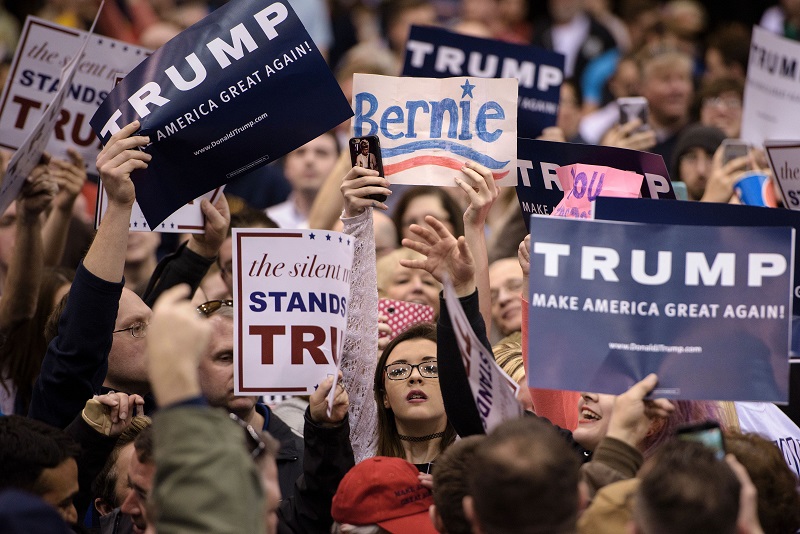 Donald Trump and Bernie Sanders aren’t a likely pair. Sanders – a man who has been engaged in politics for decades – is a self-described Democratic Socialist, who has pushed hard for workers’ rights and expanded social programs during his time in government. Trump, on the other hand, is a Capitalist; a billionaire who could be called the yin to the Sanders’s yang. With the 2016 presidential campaign in full swing, it seems these two couldn’t be any further apart, at least ideologically.

And yet, that’s not quite the case. Though Trump has taken a hard swing to the right – going so far as to advocate for all-out bans on people of certain religions, the building of a wall along the southern border to keep out immigrants, and even for punishments for women who get abortions – this hard-line conservatism hasn’t always been a part of his persona.

Trump has made stops all over the ideological and political map over the years, and because of that, has held positions that would surprise most of his current swath of supporters. He’s held positions that are liberal, even – so liberal, that even Bernie Sanders himself would probably toss his support behind them.

That’s another way in which Sanders and Trump differ: Sanders has remained steadfast in his liberal, relatively far-left beliefs over his storied career as a politician. Trump has changed his mind, radically, numerous times. It’s one of the reasons so many people are worried about a potential Trump presidency. He seemingly makes up his mind on the fly, and has even said as much.

For example, this is what he told the hosts of MSNBC’s Morning Joe, per Mother Jones, when asked with whom he consults regarding foreign policy issues:

“I’m speaking with myself, number one, because I have a very good brain and I’ve said a lot of things. I know what I’m doing, and I listen to a lot of people, I talk to a lot of people, and at the appropriate time I’ll tell you who the people are. But my primary consultant is myself and I have, you know, a good instinct for this stuff.”

But recent ideas and campaign issues aside, here are a handful of ideas that Trump has floated and supported, that even Sanders and his supporters can get behind.

It’s hard to imagine Trump coming out and taking a stand for a nationalized, government-run healthcare system at this point, but it’s an idea he has supported in the past. And it’s an idea that Bernie Sanders has long stood behind, and continues to push for today through his campaign. The big hang-up that nobody’s been able to quite get passed, at least as of this point, is how to actually do it.

But as far as Trump’s support for the concept goes, Politico reports that in his 2000 book The America We Deserve, he wrote that he was a self-described liberal, who felt that a single-payer system was needed to address the millions of uninsured Americans. He even backed the idea of tax-subsidized health marts – which sound almost exactly like what Obamacare instituted.

2. Higher taxes on the rich

Yes – Donald Trump, the billionaire, has advocated for higher taxes on the rich. This, of course, is the cornerstone of the Bernie Sanders campaign, which Sanders believes will help iron out the massive economic rifts we’re seeing open up between the 1% and everybody else. It’s a serious problem, and one that could have long-lasting effects. As Sanders has repeatedly said, taxing individuals in the highest income brackets to fund expanded social programs might do the trick.

As for Trump’s support of the notion, in the past he has called for a one-time, massive tax on the nation’s rich. Back in 1999, Trump pushed for such a tax, in order to reduce the taxes of lower-earners. Here’s what he said, according to a CNN report from the time:

“The plan I am proposing today does not involve smoke and mirrors, phony numbers, financial gimmicks, or the usual economic chicanery you usually find in Disneyland-on-the-Potomac,” Trump said. “By my calculations, 1 percent of Americans, who control 90 percent of the wealth in this country, would be affected by my plan,” Trump said.

“The other 99 percent of the people would get deep reductions in their federal income taxes.”

If you think the Republican party has gone off the rails over the past few years, you’re not alone. But back in the late 1990s, Trump had seen enough of the GOP’s nuttiness, and switched parties, from a Republican to a Democrat. This was the first in a series of ideological changes for Trump, who now finds himself on the cusp of the Republican nomination for president. He even went so far as to call long-time Republican leader Pat Buchanan a “Hitler lover.”

“I really believe the Republicans are just too crazy right,” Trump said, according to the New York Times, back in 1999. It’s interesting – If only he knew how far right the party would end up leaning, and what his role would be in taking it there.

Considering some of the racist and xenophobic things Trump has said during his campaign, it might come as a big surprise that he’s a supporter, or at least was, of affirmative action. And he’s brought it up very recently, not decades ago. When the Supreme Court heard a case related to affirmative action this past year, the late Justice Antonin Scalia had some particularly pointed things to say in a dissent, which ruffled a lot of feathers. His opinion included questioning whether black Americans needed to go to “less-advanced schools.”

Trump shot back, saying “I don’t like what he said, no, I don’t like what he said. I heard him, I was like, ‘Let me read it again,’ because I actually read it in print, and I’m going, I read a lot of stuff, and I’m going, ‘Woah,’” according to The Hill. “I have great African-American friendships,” he said. “I have just amazing relationships. And so many positive things have happened.”

Given all the racial animosity surrounding his campaign, this was a rather surprising stance for Trump to take. And one that Sanders supporters would probably agree with.