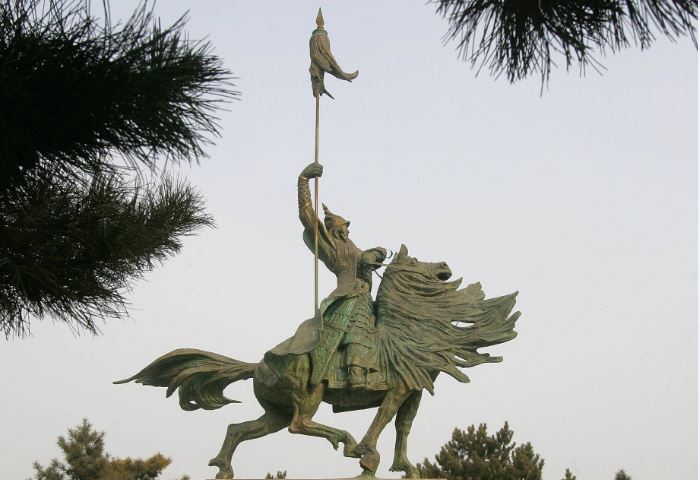 If there is one individual who truly left a lasting mark on the world, it’s Genghis Khan. Not only did Khan conquer a hearty portion of the known world during his reign as ruler of the Mongols, but the extent of his power and influence is still very much present today. Think about it — the Chinese literally erected a 13,000-mile wall to keep him at bay (blowing Donald Trump’s plans out of the water), and even today, as many as one in every 200 men in the world are direct descendants of Khan himself.

The guy was not to be messed with, and everyone knew it. From China to the Eastern Europe, Khan was a man who was feared and respected, and a full 800 years after his rule in the mid to late 1100s and early 1200s, researchers and strategists are still awestruck by what he was able to accomplish.

In the same vein as Machiavelli and Sun Tzu, Khan is a historical figure that can teach all of us — even the modern white or blue collar worker — a thing or two when it comes to planning and strategic thought. If you really want to mount an offensive strategy and propel your career to new heights, it may be worth taking some time to study Mongol tactics, and see how they can be used in your everyday life to get you ahead.

Many business and political leaders cite works like The Art of War and The Prince as highly influential books that shaped their thinking and their strategies. We see them put the principles to work even today, and in a variety of situations. Whether it be on a macro scale, in trying to propel a firm to the top of its specific industry, or merely vying for a promotion, there is a ton of wisdom and insight to be gained by studying the great leaders and thinkers of the past.

In the case of Khan, there’s a lot to work with. So much, in fact, that there are entire college courses dedicated to delving into his leadership and warfare strategies. But if you want to really get to the heart of Khan’s blueprint for success, we can distill it down to a few central points. Again, there’s much more to it than this, but if you truly want to walk the Mongol path to victory in your personal or professional life, engaging in the following tactics is a good place to start.

Genghis Khan used complex and vast spy networks to ensure that he had a healthy flow of up-to-date intelligence coming to him from across his empire. He also made sure that his communication channels were fast and efficient, which ensured that his orders were making it to the front lines. Communication was key, and Khan knew it.

Today, communication is instantaneous, and with a network of friends or allies in the office, it can be relatively easy to find out when a new position opens up, or when you might be considered for a promotion. Spending some time to set up interoffice ‘intelligence’ networks can give you an advantage — especially while your coworkers or professional rivals are spending their time playing Candy Crush, or surfing Facebook.

The Mongol hordes were famous for their mobility. As a nomadic people from the Steppes, they were well-trained and comfortable on horseback, and each soldier typically had multiple horses that they towed along from location to location. It was the Mongol’s ability to quickly and efficiently move that often ensured victory over larger, less agile forces.

While you don’t necessarily need Seabiscuit by your side to enact a coherent battle strategy, the takeaway here is to learn how valuable speed and mobility are in conflict. If you can become one of the more nimble and professionally agile people in your industry, you’ll have a significant leg-up on your rivals. You’ll seemingly be able to be in two places at once — or at least tackling multiple tasks, or solving multiple problems. Nobody’s going to let that type of work ethic (or the illusion thereof) get away. The more valuable you are to an employer (or a rival employer), the more market value you can command.

How did Khan keep his armies swollen with riders and conquerors, willing to put their lives on the line at any moment? It was through a process of assimilation. In every new land that the Mongols took, the conquered peoples were given a choice: join, or die. By assimilating and absorbing new recruits along the way — along with new technologies and tactics — the Mongols became an unstoppable machine, and one that few would even dream to stand against.

This is something that you can put to use in your own life as well. While you don’t want to be disingenuous, or simply use people for your own purposes, making friends in the right places, or becoming a go-to resource for new coworkers can strengthen your cause. This is in line with developing an ‘intelligence network’ — though you’ll more or less be adding to it as you go.

One of the more clever tricks the Mongols employed were a series of illusions meant to leave a psychological impact on their opponents. One of the most famous was the campfire illusion, which was the lighting of hundreds, if not thousands of campfires all around a military target to seem like the Mongol army was much larger than it was. If you were looking out at night, and saw hundreds of fires, you’d probably think the Mongol ranks stretched on forever — while in reality, it may have been a much smaller force.

There are many potential applications for this sort of ploy. Basically, you’re trying to make yourself appear bigger, stronger, and more fierce than you really are, all in an effort to gain a psychological edge. You can simply walk around with a sense of impenetrable confidence, and it’s likely that people will get out of your way. Or use the George Constanza trick of looking annoyed all the time — people will think you’re busy and productive. It’ll depend on your specific circumstances.

Used in conjunction, the Great Khan’s tactics may be able to serve you a full 800 years after they were first pioneered. Just be sure you don’t bring a bow and arrow to work, and steer clear of some of the particularly nasty bits — history is rather bloody, after all.