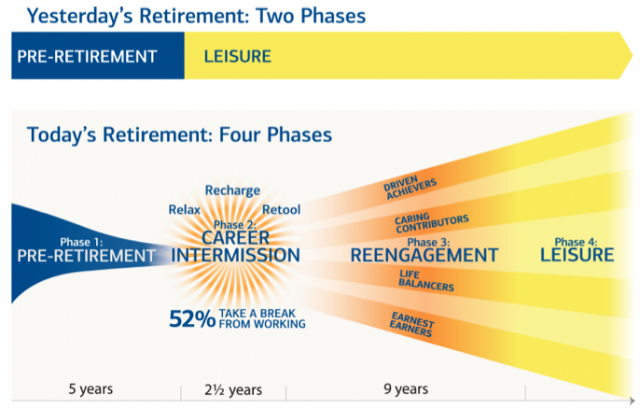 The conventional idea of retirement is being challenged in the 21st century. A new analysis reveals that many commonly held beliefs about work in retirement are obsolete as life expectancy and aspirations improve.

Retirement is no longer being defined as a period of inactivity. According to Merrill Lynch and Age Wave, retirement now has four distinct phases: pre-retirement, career intermission, reengagement, and leisure. The reengagement phrase is the biggest surprise in the study, as three out of four pre-retirees older than 50 say their ideal retirement will include working in some capacity. Furthermore, money is not the biggest motivator for staying in the workforce.

“This study turns conventional wisdom on its head,” said Andy Sieg, head of Global Wealth and Retirement Solutions for Bank of America Merrill Lynch. “By embracing these new realities and attitudes toward work in retirement, everyone from policy makers to employers and the financial industry will be better equipped to help people pursue their goals.”

Let’s take a look at four popular retirement myths debunked by the extensive study of more than 7,000 respondents across the nation. 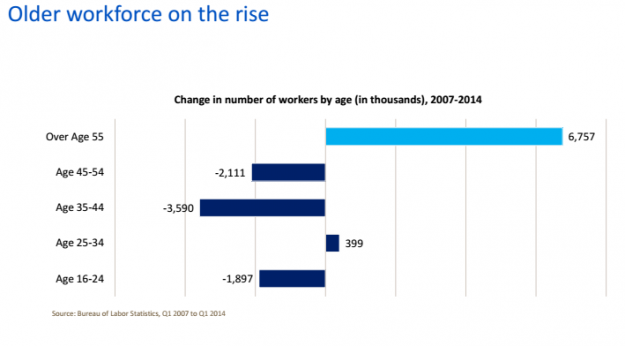 A growing number of people are starting to reconsider whether leaving the workforce entirely for 20 or more years is practical, desirable or affordable. Nearly half of today’s retirees say they either have worked or plan to work during retirement. In fact, 40 percent of people older than 55 are working, a level not seen since the 1960s. Furthermore, retirees are four times more likely to say they work in retirement because they “want to” instead of “needing to.”

“This study confirms that as people live longer and healthier lives, they’ll continue to find satisfaction from work even after they retire from their primary career,” said Ken Dychtwald, founder and CEO of Age Wave. “For many, work is an enriching experience that may not end at the age of 65 or even 70. Whether it’s continuing to do what they love, pursuing a long-desired interest or simply seeking to remain socially engaged, there’s a revolution brewing. People have come to realize that retirement doesn’t necessarily represent the end of an active life, but rather the beginning of new and exciting chapters.”

As the chart above shows, older Americans account for the entire growth in the workforce since 2007. Since 72 percent of pre-retirees age 50 and older now say their ideal retirement includes working part-time, full-time or some other mix, this trend is expected to grow in the coming years. 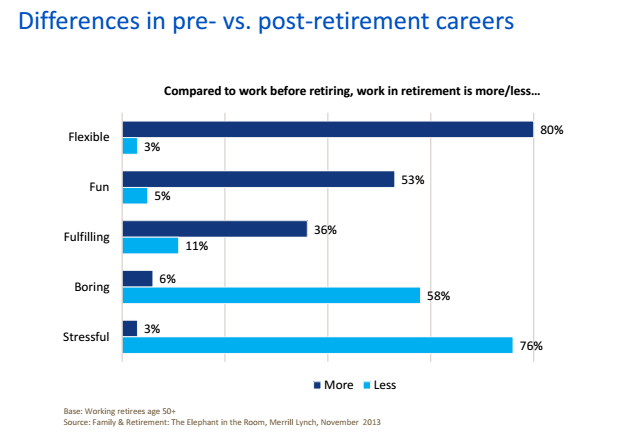 2. Myth: Retirement is a time of decline

Some things in life get better with age. After taking a break for an average of 2.5 years to relax and recharge, many retirees return to the workforce for an average of nine years. Retirees often find their work more rewarding amid a better life balance, and many use work in retirement as an opportunity to give back to their communities. Financial burdens are also less common, with seven out of 10 homeowners older than 65 having zero mortgage debt.

The report explains: “Retirees who continue to work in some form are more stimulated, connected to others, and proud of their lives than retirees who stop work completely. Regardless of work status, retirees agree that working in retirement helps people stay more youthful (83 percent), and that when people don’t work in retirement, their physical and mental abilities decline faster (66 percent).” Fifty-three percent of retirees say working during retirement is more fun than pre-retirement. 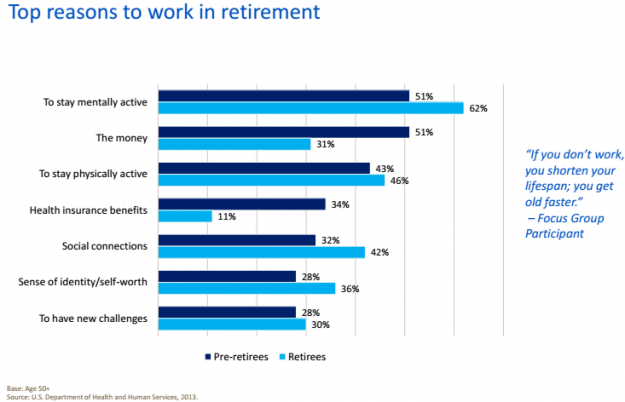 3. Myth: People primarily work in retirement because they need the money

Money certainly plays a role in returning to the workforce, but probably not as large of a role as you think. Among pre-retirees, staying mentally active and earning money are tied as the top two reasons for planning to work in retirement. However, 62 percent of actual retirees say staying mentally active is the top reason for remaining in the workforce, followed by staying physically active (46 percent) and social connections (42 percent).

The study finds four specific types of working retirees, each with different attitudes and reasons for working. Thirty-three percent are classified as “caring contributors.” They seek to help their communities for worthwhile causes, and four out of 10 work for a nonprofit. Twenty-eight percent are “earnest earners” who actually need income from working to pay the bills and who did little to prepare themselves for working in retirement. Twenty-four percent of retirees are “life balancers,” which means they primarily want to keep working for friendships and desire work that is fun, not stressful, and part time. The final group are “driven achievers” (15 percent). They tend to be workaholics, and four out of five feel at the top of their game. 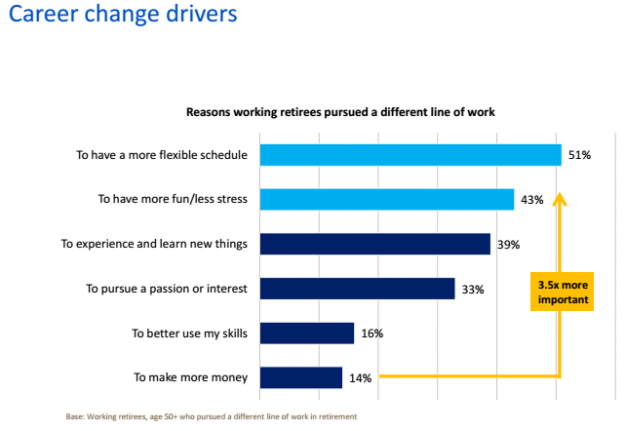 4. Myth: New career ambitions are only for young people

Youth is often wasted on the young, especially when it comes to entrepreneurship. Working retirees are three times more likely than pre-retirees to own their own business or be self-employed. Respondents said the top reason for starting a business is to work on their own terms (82 percent), while only 14 percent feel they have to in order to find work.

The report explains: “While many may think of typical entrepreneurs as people in their 20s from Silicon Valley, the reality is that older workers — with their vast experience, business connections, and often greater financial resources — have consistently exceeded younger workers in entrepreneurial activity.”

Nearly three out of five working retirees also say retirement is an opportunity to transition to a different line of work. Retirees who participate in the Career Intermission phase are even more likely to launch into new career paths than those who do not take a break from work (68 percent versus 47 percent). As the chart above shows, having a more flexible schedule is the top reason for pursuing a different line of work. 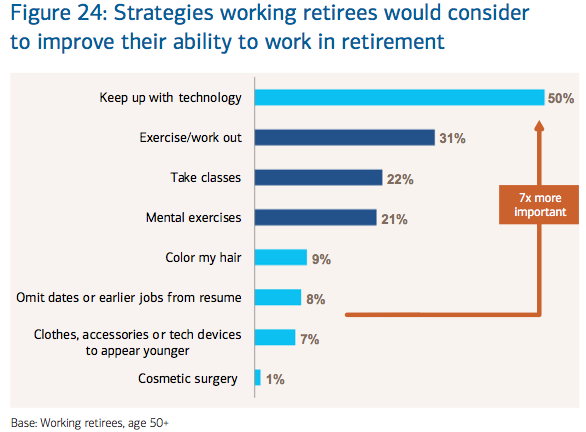