5 Easy Ways to Save Enough Money for Retirement

Most Americans want to save more. When Fidelity Investments asked people about their New Year’s financial resolutions for 2015, 55% said setting aside more of what they earn was their top priority, whether for retirement or another goal.

Good intentions aren’t always accompanied by action, however. While many people give lip service to the importance of saving more money, a disturbing number are starving our piggy banks. Sixteen percent of people save nothing at all, and another 28% set aside 5% or less of their income, according to a 2015 survey by Bankrate.com. Nearly a third of workers have $1,000 or less saved for retirement, the Employee Benefit Research Institute (EBRI) found.

One big reason people aren’t doing more to prepare for retirement? They can’t afford it. Half of people surveyed by EBRI said that the cost of living and meeting day-to-day expenses made it difficult to save.

It’s true that boosting retirement savings seems difficult if you can’t earn more money or dramatically cut your budget. But those aren’t the only ways to save more. You can grow your nest egg without having to find a new career or give up all discretionary spending.

Here are five virtually painless ways to save more money for retirement.

Seventy-seven percent of companies that sponsor a retirement plan offered matching contributions in 2014, according to the Transamerica Center for Retirement Studies. If you’re lucky enough to work for an employer that provides such a benefit, it’s foolish not to take advantage of it.

Yet millions of people are saying “no” to what’s essentially free money. One in four Americans doesn’t save enough to get their match, losing out on an average of $1,336 every year, a 2015 report by Financial Engines found.

“The 401(k) match is one of the best deals going for employees, providing an immediate guaranteed return per dollar invested,” said Greg Stein, director of financial technology at Financial Engines, in a statement.

The average employer plans to offer employees a 3% raise in 2015, according to the Towers Watson Global Workforce Study. That’s not as big as many people would like, but it’s better than nothing. If you earn $50,000 a year and receive a 3% raise, that translates to an additional $1,500 in income. Save just half of that amount, or $750, and you could have tens of thousands of dollars more when you retire.

Saving a portion of your raise rather than spending it all also helps avoid lifestyle creep. That means you’ll need less money when you do stop working, because you’ll be used to living on less. Retirement expert Michael Kitces suggests that a person who saves half of their annual raise will find it easier to meet their retirement goals.

“The end result of such an approach is that increases in the standard of living are more controlled and rise far more slowly, savings grow exponentially … and you can even retire early,” he wrote on his blog.

Every once in a while the financial gods give us a gift. Whether it’s a surprise inheritance, an unexpected bonus, a larger-than-expected tax refund, or other windfall, you can use some of that money to increase your retirement nest egg.

If your finances are stable, you may simply want to stash your extra money in a traditional or Roth IRA, or even in a taxable investment account that you’ve designated for retirement funds. Those carrying a credit card balance might use a windfall to pay off those bills and then shift the money that was going to debt payments to retirement. Or your could use a windfall to shore up your emergency fund so you’re not tempted to raid your retirement accounts when you need cash.

4. Take a hands-off approach to investing

Tempted to tweak your portfolio every time the stock market moves? Don’t, say many experts. Attempting to pick hot stocks and time the market is tough for individual investors, who typically don’t have the same financial expertise as investment professionals. You’ll likely end up with a bigger portfolio come retirement if you resist the urge to trade constantly.

“For most people, trying to pick among major investments might be a mistake because it’s an overpopulated market. It’s hard,” Nobel-Prize-winning economist Robert Shiller told Marketwatch. “You have to be realistic about how savvy you are.”

A better approach is to develop a long-range investment plan and stick to it, perhaps with the help of a financial adviser.

“Being disciplined as an investor isn’t always easy, but over time it has demonstrated the ability to generate wealth, while market timing has proven to be a costly exercise for many investors,” John Sweeney of Fidelity Investments told Fidelity Viewpoints.

5. Watch out for fees

Choosing lower-fee investments could help increase your total retirement savings by tens of thousands of dollars. Paying annual fees of 0.25% rather 1% could mean $30,000 more in retirement savings after 20 years, says the Securities and Exchange Commission (assuming an initial investment of $100,000 and annual returns of 4%).

The more you earn and invest, the more you have to lose to fees. A high-income 25-year-old could lose more than $200,000 over his lifetime by paying fees of 1% rather than 0.25%, according to a 2014 study by the Center for American Progress (CAP). 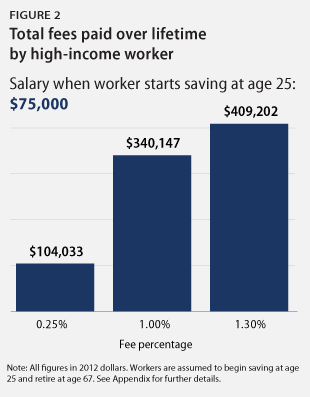 “The impact of these fees is so dramatic that it can strip away 20% or more of an employee’s retirement savings,” noted the CAP report. Paying attention to fees when selecting investments can mean significantly more in your pocket at retirement, without having to save more today.