5 NBA Teams That Successfully Tanked for the Draft

With the college basketball season now fully underway and a 2014 draft class that has fans, pundits, and general managers salivating as much as they have in a decade, discourse around tanking in the National Basketball Association has reached fever pitch.

Tanking — maligned by anyone who believes sports organizations should always try to put the best team possible on the court as often as possible — may be better described as bottoming out. It amounts to divesting a team of on-court talent in hopes of accumulating losses, which ensure a higher pick in the upcoming draft.

While getting bad and staying bad is hardly a surefire recipe for success (if you listen closely, you can hear fans who still root for the Sacramento Kings weeping), here are five NBA teams that successfully abandoned wins for a temporary boost in their draft stock.

This one is controversial, as the organization has loudly denied that it tanked for Tim Duncan, and fans are probably irate at seeing the silver and black anywhere near this list. But the Spurs make the cut because tanking can take many forms and is not necessarily something decided upon by a front office at the outset of a new season.

The ’95-’96 San Antonio Spurs won 59 games. At the beginning of the next season, star player David Robinson, aka “The Admiral,” aka the platonic ideal of an athlete, was battling back spasms, a nagging injury picked up in the preseason. Six games into the regular season, Robinson broke his foot in a home game against the Miami Heat. Robinson’s ship officially sank.

Then, Sean Elliot, the Spurs’ forward, who averaged 20 points per game the year before, succumbed to right knee tendonitis and only ended up playing 39 games for the team that season. For a player nicknamed “Ninja,” this disappearing act would prove opportune for San Antonio. Finally, a player with a name like a bad alias — Chuck Person, San Antonio’s other forward — also sat out the entire year with back spasms.

After starting the season 3-15, coach Bob Hill was fired, and general manager Gregg Popovich installed himself as head coach. Pop would lead the Spurs to a final record of 20-62, the only losing season on Popovich’s sterling resume and the first (and last) losing season for San Antonio since ’88-’89. The team’s descent from 59 wins to 20 remains the second largest single-season decline in league history.

It would be foolish to say that the front office could have predicted these injuries going into the season. It would be offensive to say that the injuries to these players were faked, not serious, or possibly exaggerated. It is, however, very possible to posit that the only reason the Spurs encouraged three of their best players to spend the entire season on the sidelines in a sports universe where words like “toughness” and “fortitude” are flung around often as synonyms for “amazing” was because of The Big Fundamental. The Spurs finished with the third worst record in the league.

The Vancouver (now Memphis) Grizzlies finished at the very bottom, with a 14-62 record, but were disqualified from the lottery due to the organization’s status as an expansion team. Second? The Boston Celtics, winning 15 games and finishing with the third overall pick. The Celtics had unabashedly tanked for Tim Duncan, going so far as to hire M.L. Carr to “take one for the team” (his words) and win as few games as possible; the team used its pick to draft future Finals MVP Chauncey Billups, only to trade him after a paltry 51 games because then-coach and GM Rick Pitino was a bad man who did bad things.

If the Spurs inclusion is controversial, this choice is anything but. Do you know why the NBA has a draft lottery instead of simply giving the top pick to the team with the worst record? Ladies and gentlemen, your 1983-1984 Houston Rockets!

After selecting Ralph Sampson with the first pick in 1983, the Rockets began their season with a disappointing but salvageable 20-29 record … then ignominiously finished 9-27. The reason? A player on that squad, the management, and coaching staff had decided to “start looking at more people.” Apparently, practice wasn’t enough time to evaluate the guys on the end of the bench. Or perhaps they were really evaluating the guys at the top of the draft class. Guys with last names you might have heard of. Guys with last names like Jordan. Or Olajuwon. “His Airness” and “The Dream.”

If you were the Portland Trail Blazers, you’d be really excited about a player named Sam Bowie, who is best remembered as “the guy who got drafted ahead of Michael Jordan and was injured for most of his professional basketball career.” That’s a long nickname. Not very catchy.

Remember, at this point, there was no draft lottery. The two worst teams in the league flipped a coin for the right to the first pick. The Rockets won the pick and selected Hakeem Olajuwon, who went on to become a very, very good basketball player. You might have heard of him. He’s famous now for being one of the best post players in the history of the NBA. Of course, they could have drafted Michael Jordan, who wasn’t too bad, either.

Either way, that Rockets season stands as a testament to one of the more famous adjustments to the NBA draft. Twenty years later, even David Stern would admit that the Rockets had fueled the league’s fire to change the perception that teams were losing on purpose.

When the phrase “stacked draft class” is brought out, it’s often referring to the cream of the crop of the 2003 draft: Chris Bosh, Dwyane Wade, Carmelo Anthony, and LeBron James. Perennial All Stars. Some of the best basketball players on the planet.

While the Spurs were forced to tank because of injury and the Rockets blatantly threw games, the Cleveland Cavaliers simply assembled a roster that was ready to lose, starring the defense-averse Ricky Davis and a rookie Carlos Boozer. For his part, Davis was putting up a solid 20/5/5 and Boozer was averaging a 10/7, but the team was simply not designed to win, giving significant minutes to players like Smush Parker and Jumaine Jones, who would both be jettisoned as soon as the season was over.

Before the season began, the Cavaliers traded away professorial point guard Andre Miller (for the perennially injured Darius Miles) after he had averaged 16.5 points and a league-leading 10.5 assists per game. Lamond Murray, upset at the prospect of losing minutes to Miles, wanted out in September (he was traded for an injured Michael “Yogi” Stewart), and Wesley Person was traded for Matt Barnes, which seems like a solid trade until you realize that Barnes was the 49th pick in the previous NBA draft (2002) and expectations for him were appropriately low, while Person was the Cavs’ third-best player.

Unsurprisingly, the Cavaliers finished in the bottom fourth of NBA teams in points per game, offensive rating, defensive rating, and opponent points per game, according to Basketball-Reference.com. After starting the season 8-34, coach John Lucas was fired (there’s a pattern here) and replaced by Keith Smart, who helmed the ship to a 9-31 finish. At the end, the Cavs were only able to cobble together 17 wins, one of the four worst records in the league, and they were eligible for the lottery for the No. 1 pick.

Lucas would later tell ESPN that then-owner Gordon Gund had purposefully traded away players who could contribute in order to foster a losing record, draft LeBron James, and increase the value of the franchise before selling the team. “Get Buckets” Davis, one of the few spots of entertainment on the roster, agrees with him. Gung has publicly denied tanking. He sold the team for a profit in 2005. 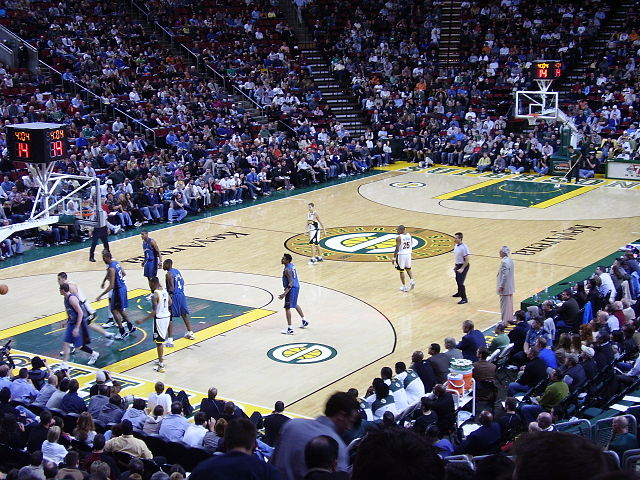 Before the Oklahoma City Thunder played in OKC, they were the venerable Seattle SuperSonics. With a shady ownership group and the threat of using taxpayer dollars to renovate their stadium, the Sonics were moved from Seattle and relocated to Oklahoma City, whereupon they became a beloved small-market team in a city that loves basketball. But we’re not here to talk about that. We’re here to talk about how the team got bad on purpose to accumulate high draft picks — and if you’re really feeling cynical, to keep attendance low while they plotted to steal the team from the fans.

It is now June 28, 2007. The Sonics, coming off a 31-51 season, are about to draft Kevin Durant with the second pick in the draft. Durant, a widely touted prospect, knows that the Sonics are drafting him and believes he is set to join forces with All-Stars Ray Allen and Rashard Lewis.

Minutes before the Sonics select Durant, a trade is announced: The Boston Celtics have traded the rights to the fifth overall pick in the draft (which would become Georgetown forward Jeff Green) alongside Delonte West and Wally Szczerbiak for Allen and the 35th pick — Glen “Big Baby” Davis.

That July, the Sonics sent Lewis to the Orlando Magic for a draft pick and a trade exception. They would later use that exception to get more draft picks and the corpse of Kurt Thomas.

The 2007-2008 Seattle Supersonics finished with a record of 20-62, good for last place in the Western Conference. They moved to Oklahoma City in the offseason and used the fourth pick in that draft to select point guard Russell Westbrook.

Fun fact: during the ’05-’06 campaign that landed them Durant, the Sonics fired their head coach. That coach was none other than Bob Hill, the same guy who was canned right before the Spurs drafted Tim Duncan. Hill may be the unluckiest head coach in modern NBA history. 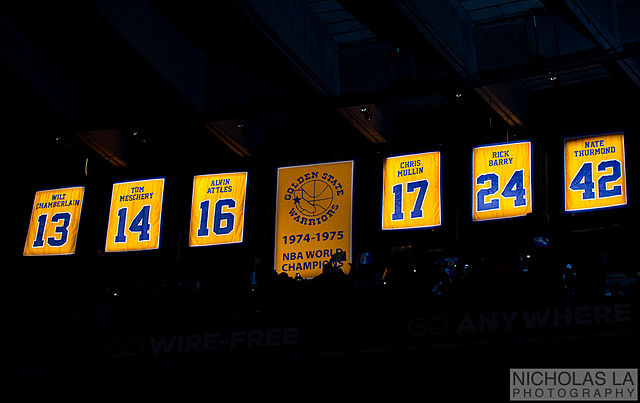 In 2012, Golden State’s first-round draft pick was owed to the Utah Jazz, but there was a caveat: It was protected. In NBA talk, a protected draft pick is exactly what it sounds like — in this case, the Warriors would only have to give up their draft pick if they didn’t finish with one of the six worst records in the league. With the team’s early and mid-season success, this became a problem.

In response, the Warriors traded dynamic scorer Monta Ellis for ace defender — and, at the time of the trade, injured reserve resident — Andrew Bogut, who was already out for the season. This is the one thing that could be defended as a defensible move, as D was something that Golden State was positively allergic to at the time. Then the team shut down its other dynamic scorer, point guard Stephen Curry. Then it shut down perennial 20/10 power forward David Lee.

Then the Warriors decided that April was going to be their “evaluation” period, starting players like Charles Jenkins over healthy scratches like Nate Robinson. Thirty-six-year-old Mikki Moore was signed straight out of the D-League expressly to play 20-plus minutes (and not win games).

Because of their abysmal finish to the season (they went 4-19), the Dubs were able to hang on to their lottery pick and draft Harrison Barnes, who burst into the NBA spotlight during his run as a small-ball power forward in the Warriors’ playoff run last year. Tanking absolutely worked for the Warriors, and as someone who usually enjoys Golden State basketball, it was difficult to watch such blatant self-sabotage succeed.

It may not be a surefire ticket to a championship — and front offices should rely on more complicated game plans than to be bailed out by the lottery — but when a team starts using phrases like “player development year” or “not built to win right away,” it’ll behoove the savvy NBA fan to read between the lines and start watching college hoops well before March Madness.