5 Reasons Americans Are Still Concerned About the Economy 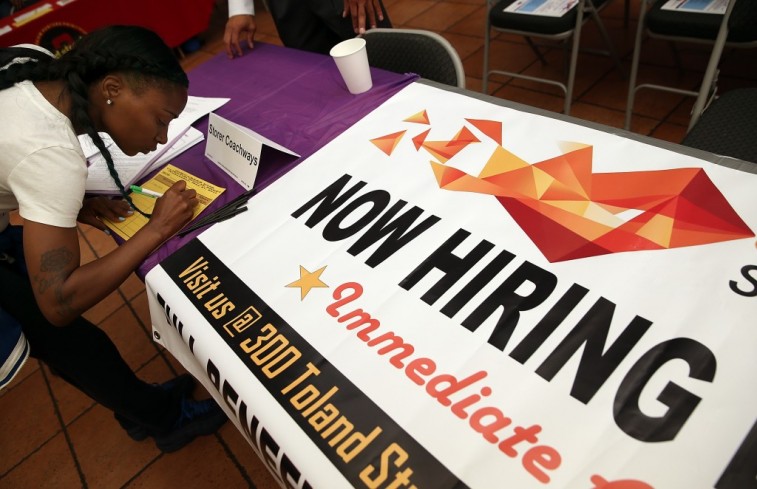 “After reaching a two-year high earlier this year, satisfaction with the direction of the U.S. continues to wane,” Gallup found, based on data from an early May poll. Just 26% of respondents expressed approval of the country’s trajectory, primarily because of growing concerns for U.S. economic health and ongoing government dysfunction.

Alongside the decline in overall satisfaction, Gallup’s measure of economic confidence has slipped as well. “Americans had a more positive outlook on the economy at the dawn of 2015, but these views, like satisfaction, have edged down in recent months,” the report noted. Not only are satisfaction and economic confidence lower than in the beginning of this year, but they are also far below historic levels; between 1998 and the middle of 2002, a majority of Americans were satisfied with the direction of the country. The measure reached a record high of 71% in February 1999, but satisfaction began to decline amid President George W. Bush’s tenure in the White House. 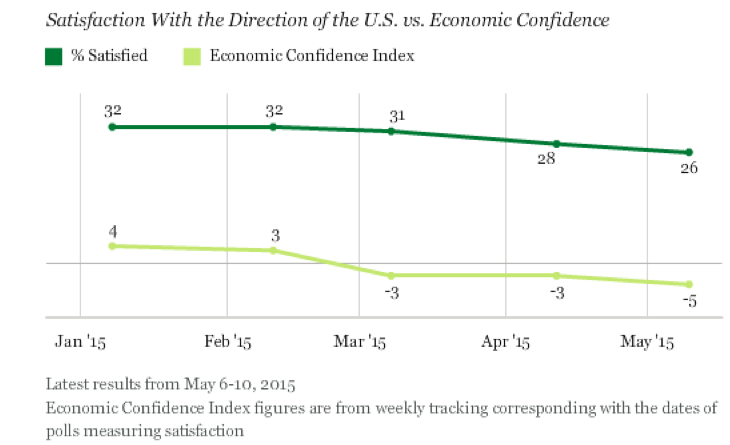 Congress and politicians are the most commonly mentioned problems among Americans who believe the country is headed in the wrong direction. However, it is significant that the economy and unemployment remain near the top of their list of concerns. The share of respondents listing economic concerns and worries over the unemployment rate has fallen by more than third from their recession highs to 12% and 10%, respectively. And even though Gallup found that Americans’ confidence in the economy is higher this year than in recent ones, it is still negative. May began with fewer than a quarter of Americans believing the economy was excellent or good, while 54% of Americans thought the economy was getting worse, which is the worst score recorded since last November.

With the national headline unemployment rate returning to what labor market economists typically refer to as “normal,” the continued negativity of economic confidence in the United States may seem odd. However, there are several explanations for why Americans still judge the country’s economic health with some trepidation.

Why does the economy remain a top concern?

During the first week of May, Gallup’s Economic Confidence Index recorded its largest single-week decline since last July. After briefly rising to a reading of positive 5 at the beginning of 2015, it has remained negative for months. “The recent dip in Americans’ economic confidence — which is being dragged down largely by the lower economic outlook component — is likely the culmination of a variety of economic factors,” the report explained. 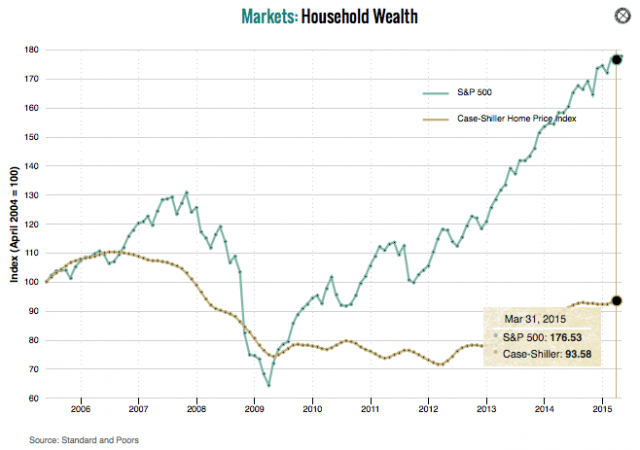 Gallup included the stock market as one of those factors. Investors have generally enjoyed solid returns since the end of the Great Recession. In 2013, the stock market underwent the broadest rally since at least 1990; in 2014, the S&P 500 avoided recording four-consecutive-down days for the first time in the index’s 90-plus-year history; U.S. stocks have more than tripled their value since bottoming out in March 2009. Both the S&P 500 and the Dow Jones Industrial Average touched records partway through May, buoyed up by a stream of weak economic data that suggests the Federal Reserve will wait to increase interest rates.

By comparison, during the week preceding the May 3 Gallup poll, stocks lost ground. Despite those two indices brushing new highs, traders and strategists say investors are not putting more money in the stock market. “There’s nervousness among investors,” Sean Lynch, co-head of global equity strategy for Wells Fargo Investment Institute, told The Wall Street Journal. And while a boring market can still yield profitable results, “they’re not blindly rushing into stocks,” he added. But stock fluctuations provide limited perspective on the country’s financial well-being, as fewer than half of households own stocks. For a great majority of the economic recovery there has been a great disconnect between those who benefited from the stock market rally and those workers hurt by stagnant wages and growing income inequality.

Because fuel can take up a major chunk of a household’s budget, gas prices have a much greater impact on economic confidence than movement in the stock market. Gallup research shows that “Americans’ confidence in the economy is related to how much they pay at the pump,” and according to the U.S. Energy Information Administration, the price for a gallon of gasoline rose 17 cents in the second half of April. 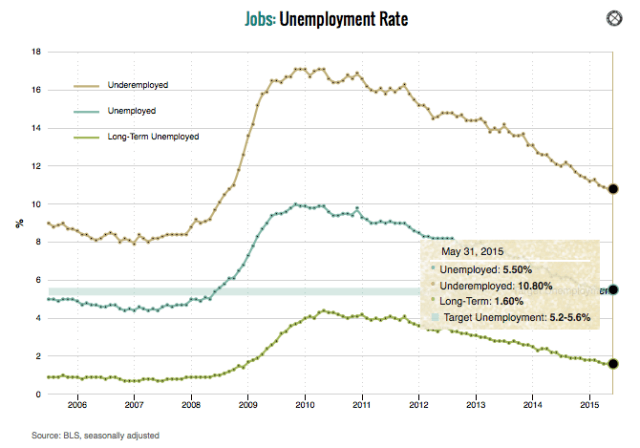 An even more important, and more complex, lens with which to examine flagging economic confidence is the state of the labor market.

May, like April, was a strong month for employment gains, although the labor market is still not yet fully recovered. The economy created 280,000 jobs, but the headline unemployment rate did jump to 5.5% from 5.4%, a level considered “normal” by labor market economists. While this increase is not ideal, it occurred because the improving market drew 400,000 unemployed Americans into the labor force. (Note: the headline rate only tracks those unemployment workers who actively searching for a job.) The number of Americans without work remained essentially unchanged, at 8.7 million.

Looking at data from a year ago highlights just how much improvement has been made. Over the past 12 months, the unemployment rate has dropped by 0.8% and the number of unemployed persons has decreased by 1.1 million. Nearly every other measurement — hiring, layoffs, voluntary quits — has also shown real growth. Adding to the increasingly rosy picture is the fact that the quality of jobs created are better. Compared to the early days of the recovery, higher-wage sectors like professional and business services and construction have experienced bigger gains than the low-wage sectors of hospitality and leisure that previously drove job creation.

The question is “no longer, ‘Is the job market getting better?’ but rather, ‘How much better can it get?’”as FiveThirtyEight’s Ben Casselman noted. Economists debate what a completely healthy job market looks like, but as Casselmen explained, the United States doesn’t have to wait until the unemployment rate hits zero. “Many think the unemployment rate can’t get much below 5 percent for a sustained period without triggering inflation,” he added. That would suggest the U.S. is getting close. But the data still shows the are room for healing with respect to labor-force participation, underemployment, long-term employment, and wage growth. 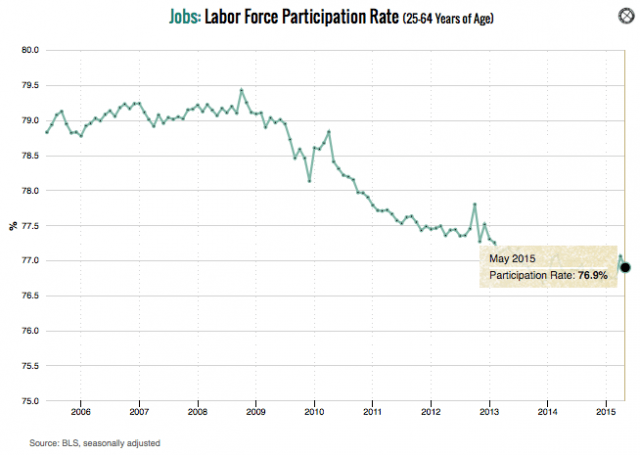 The headline unemployment rate is a narrow measure of joblessness in America, and as such, it glosses over concerning details of labor market conditions. A broader measure of unemployment, which includes those forced to take part-time work because they cannot find full-time employment, stands at 10.8%, a high level for non-recessionary times. A total of 6.7 million workers were underemployed in May, a statistic that has show little movement in recent months.

During the recession and in the years after, millions of potential workers have given up searching for jobs and dropped out of the workforce, making the declines in the headline unemployment figure slightly deceiving. Because they are not part of the workforce, they are not counted in the headline unemployment rate. As a result, the labor force participation rate — the share of working-age Americans who are employed or looking for work — is at nearly a record low. For economists, the biggest factor in determining whether the job market is fully healed is the measure of how many adults who are either working or actively looking for work, which collapsed during the recession.

“When the recession began, 66% of the working-age population was part of the labor force. Participation dropped, as it normally does in a recession, but then kept dropping in the recovery,” explained Federal Reserve Chair Janet Yellen last year. It now stands at 62.9%, essentially the same level as in 1978, when a much smaller share of women were in the workforce. Lower participation could mean that the current unemployment rate is overstating the progress in the labor market. Yellen noted in a May 22 speech that even though the U.S. economy continues to recover from the Great Recession, and the labor market is “approaching full strength,” the recovery is not yet complete. “The unemployment rate today probably does not fully capture the extent of slack in the labor market,” she added, meaning there are significantly more people willing and capable of filling a job than there are jobs for them to fill. 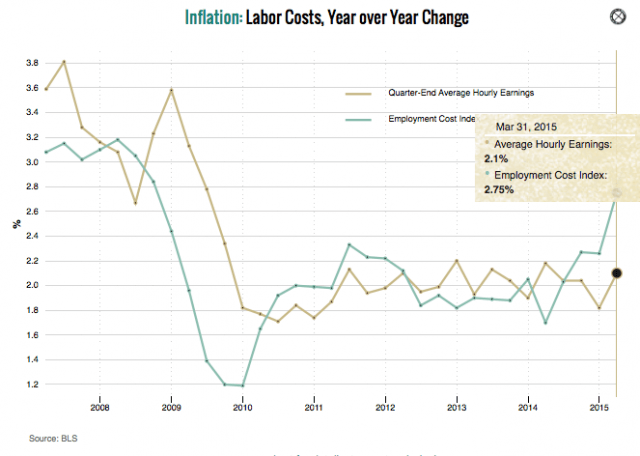 With lingering slack in the labor market, wages have remained stagnant. As the unemployment rate has fallen, economists repeatedly predicted sizable pay increases would soon appear. But those gains have yet to come. In April, average hourly earnings rose only 0.1%. May saw more strength, with hourly pay inching up 8 cents. But over the pasty year, wages have only increased 2.3%, a historically low rate of growth that indicates employers are not yet having difficulties filling open positions, or at least not enough trouble to offer higher pay. Until wages experience real growth, the recovery will feel hollow for a sizable share of Americans. 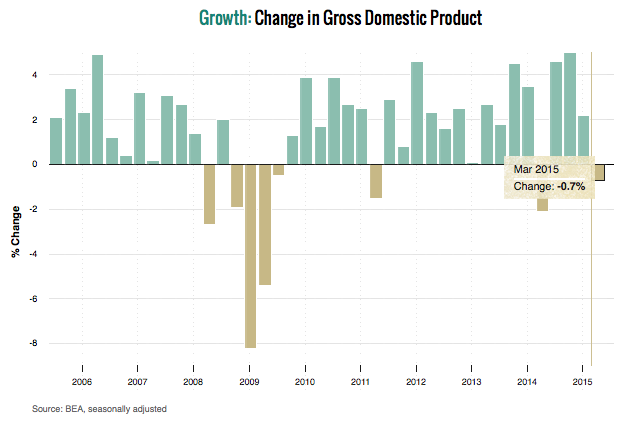 According to government data released at the end of April, U.S. economic growth came nearly to a halt in the first three months of the year as exports dropped and cold weather kept consumers from shopping. The annualized rate of 0.2% recorded between January and March fell way below the predicted 1% rate, the 2.2% recorded in the first quarter of 2014, and the 2.4% growth experienced over the past 12 months. While economists generally expect growth to have picked up in the second quarter, and Yellen noted that “some of this apparent weakness may just be statistical noise,” the fact remains that business investment, typically an engine for growth, has been sluggish over the past several years.

Still, April’s employment rebound from March’s abysmal 85,000 new-job total, May’s strong payroll growth, and the fact that initial applications for unemployment benefits (a proxy measurement for layoffs) are the lowest level ever, when adjusted for population growth, suggests the first-quarter’s anemic gross domestic product growth is not evidence of a new round of economic weakness.