5 Reasons Why You Don’t Feel Wealthier 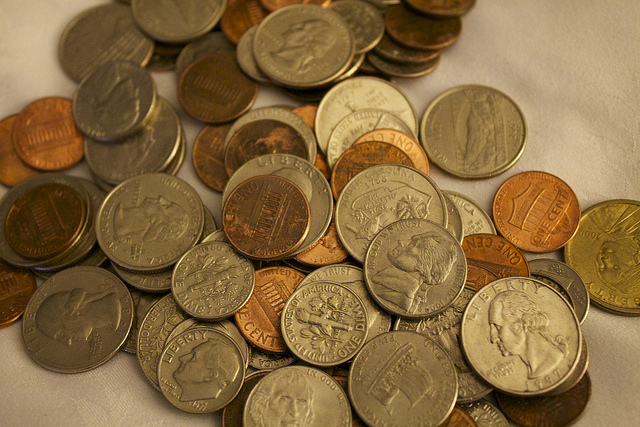 The definition of wealth is often found in the eye of the beholder. A new report from the Federal Reserve claims that American households are wealthier than ever, but many may find that hard to believe considering their own financial situations.

Net worth for households in the United States rose $1.3 trillion in the second quarter to $74.8 trillion, compared to $73.5 trillion in the first quarter. That is the highest level since the central bank started keeping records, and household net worth is nearly $7 trillion above its pre-recession peak of $68.1 trillion reached in the third quarter of 2007.

While the report is impressive on the surface, the gain in net worth for the first three months of the year was revised lower to $2.8 trillion from $3 trillion. Furthermore, a change in a definition added about $3 trillion to previously reported figures, as future benefits from pension plans are now considered to be an asset. Here’s a look at five other reasons why many Americans may not feel any wealthier.

Read More: Do CEOs Believe the U.S. Economy Will Soon Pick Up Steam? 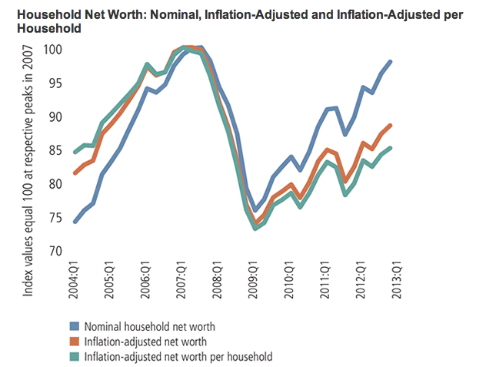 The effect of inflation is often ignored when net worth figures are discussed. However, the Federal Reserve Bank of St. Louis released a report earlier this year to address inflation adjustments.

Between the first quarter of 2009 and the fourth quarter of 2012, American households recovered about $15 trillion in wealth — almost all of the losses seen during the Great Recession. However, using the very modest inflation numbers provided by government data, the inflation-adjusted net worth of households only recaptured 56 percent of the losses.

The Federal Reserve Bank of St. Louis even goes on to calculate the net worth of households adjusted for inflation and population growth. The wealth of all American households is now shared by more families. Taking into account the additional 3.8 million new households formed over the past five years, Americans recaptured only 45 percent of their wealth. 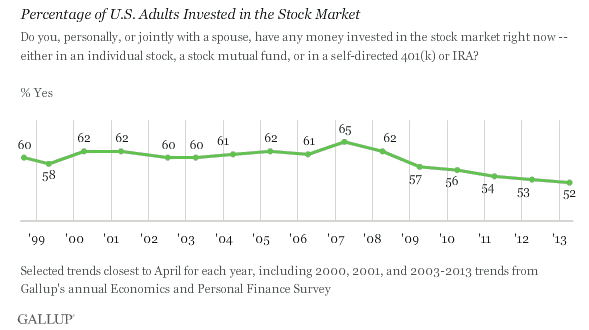 The “economic recovery” is clearly skewed toward Americans who own stocks. In the latest report from the Federal Reserve, $300 billion of the $1.3 trillion gain in net worth came from corporate equities and mutual funds. However, many Americans are not invested in the market.

Gallup’s annual Economy and Finance survey recently found that only 52 percent of Americans are either personally — or along with a spouse — invested in the stock market. That is the worst reading since Gallup began the survey in 1998, and 13 percent lower that the peak of 65 percent made in 2007. 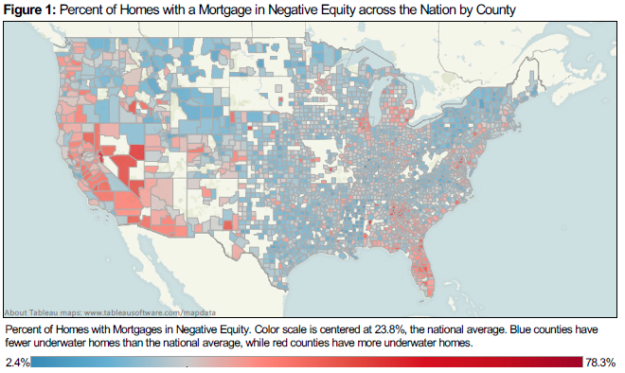 In the second quarter, the value of residential real estate owned by households increased about $525 billion. Despite the housing market being one of the strongest pillars of the economy, millions of Americans still find themselves underwater or anchored to their current homes.

Across the nation, there are approximately 12.2 million homeowners who still owe more than their homes are currently worth, according to Zillow. The firm also finds that the effective negative equity rate — homeowners with less than 20 percent home equity — is at 41.9 percent. Meanwhile, roughly one in seven homeowners owe more than double what their home is worth, and home ownership is at its worst level in 18 years.

Read More: Fed: Get Used to the Bubble Economy 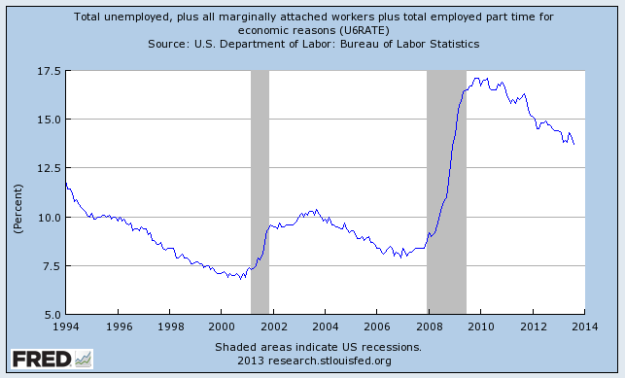 The headline unemployment rate declined to 7.3 percent last month, its best level since December 2008. This is below the peak of 10 percent in 2009, but the rate has remained above 7 percent for 57 consecutive months.

Additionally, the U-6 unemployment rate, which includes everyone in the headline rate — plus people who are employed part-time but prefer a full-time position, or want work but have stopped looking — remains stubbornly high at 13.7 percent. In fact, the number of people employed part-time because of economic reasons is nearly 8 million.

Time has not been able to fully heal the chaotic memories of the financial meltdown, which began in September 2008 with the collapse of Lehman Brothers, once the nation’s fourth-largest investment bank. According to the latest Wells Fargo/Gallup Investor and Retirement Optimism survey, 41 percent of investors are “extremely” or “very worried” about a repeat of Lehman Brothers in their retirement years.

According to the survey, 69 percent of investors said this year’s rapid stock market increase does not make them any “less fearful about sustained losses” if another Lehman-type event occurred. Furthermore, 59 percent of retired and 51 percent of non-retired investors claimed they haven’t seen a “noticeable increase” in their retirement account values as a result of the market rebound.

Read More: Who Does the Government Really Work For?