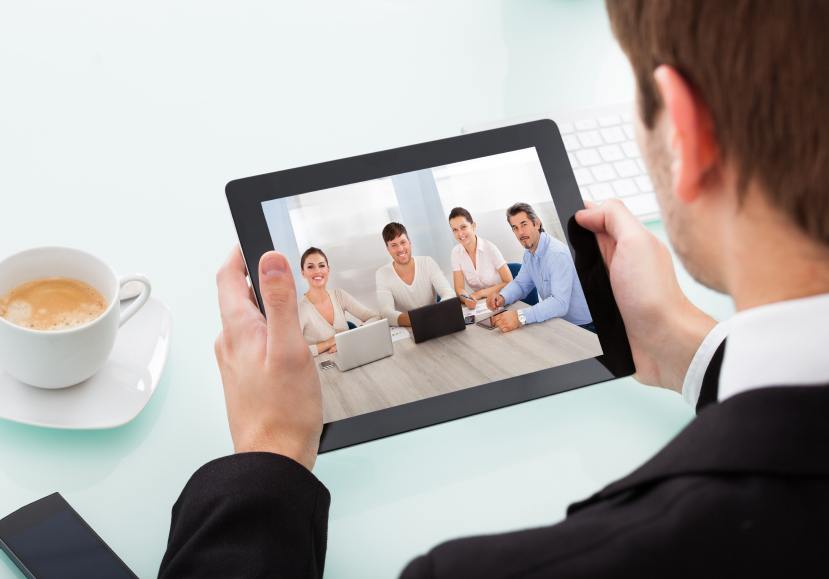 Interviewing can often be the toughest part of landing a job. You might be qualified and have a killer resume, but during the interview process you need to remember what not to wear, polite etiquette, and how to follow up afterward in a way that shows interest without coming across as desperate. And with a rise in telecommuting jobs and hiring managers looking to save time and money, the rise of the video interview adds another layer of complications.

About 13.4 million people in the United States work from home at least one day per week, according to the latest data from the U.S. Census Bureau. That number had increased by 4 million people in a decade, and will probably increase even more by the time the bureau conducts the survey again. In a 2012 survey conducted by OfficeTeam, 63% of hiring managers surveyed said their company often conducts video interviews, and several of them said they expected the practice to grow within their companies.

In many cases, you can treat a video interview in the same manner as a typical one where you visit the office, Georgia Tech’s career center advises its job-seeking students. “Whether you are being interviewed on Skype, over the phone or in person, all the general rules of a job interview apply. Research the company, read the job description thoroughly, know your resume inside out and have a few answers for common interview questions prepared,” the center states. One extra thing to think about, however, is that you’ll be evaluated on more than your resume, said Robert Hosking, executive director of OfficeTeam. “You need to not only be prepared to say the right things but also make sure you and your surroundings appear professional on camera,” he said.

With that in mind, here’s five tips about how to make sure that your video interview (on Skype, Google Hangouts, or another platform) will go off without a hitch.

If you know anything about preparation, you know that it’s relevant beyond the Boy Scout motto days. That’s definitely true in terms of getting ready for a video interview. Make sure you’ve downloaded Skype, signed up for Google Hangouts, or otherwise have the technology you need ready to go. Do a test call with a friend or family member to test your mic and video capabilities, and even get them to ask you a few questions. That way, you can start to feel more comfortable with the interview setting.

If video interviews are completely new to you, Target Jobs suggests recording a practice interview and noting whether you slouch, mumble, or otherwise make interview blunders while on screen. “Practice is fundamental to enabling you to present yourself in the right way; a lot of practice. Practice on your own, or with a friend,” media training specialist Sue Campbell told the site. Having a pre-interview tryout should make you feel less awkward, LearnVest suggests.

Job Hunt also advises that while you’re doing the test call, also make sure that the lighting is correct in the room where you’ll be, and that the camera frames you well. Your skin tones should look as natural as possible (not too bright), and the camera should be positioned so that the lower frame is in line with the middle of your chest – pretty much falling in line with the third button on your dress shirt. There should also be a space of about a hand’s width above your head. 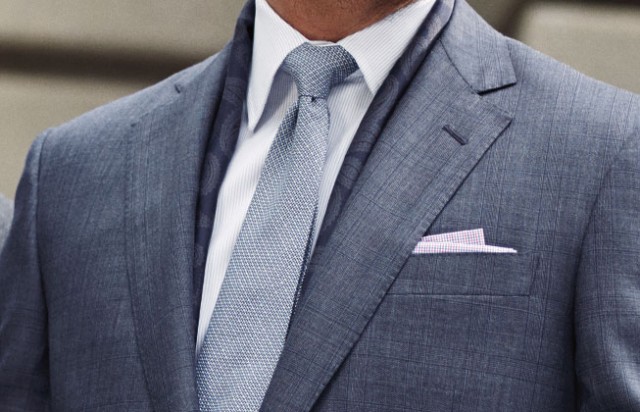 By now it should be common sense that you still need to dress appropriately for a video interview – including proper pants. If you’ve been working remotely for a while, make sure that your facial hair is neatly trimmed and you’re polished for your on-screen appearance. (It can be easy to overlook this if your at-home attire leans toward the casual end of the spectrum, one company executive told LearnVest.)

What’s more, keep in mind that some colors show up on video better than others. “Certain colors, like many shades of blue—royal, navy, sky blue—look great on video, while others like reds and hot colors like magenta can be too bright,” job search expert Alison Doyle told The Daily Muse. That’s good to keep in mind, since those colors tend to work better in any interview situation.

If you’re unsure about the company’s dress code, prepare as you would for a typical interview. Check out the company’s website, Facebook, and Twitter pages for clues, LearnVest recommends. And remember that common sense trumps here, too. As with any other interview situation, it’s likely better to be over-dressed for the occasion, Missouri State University’s career center advises.

3. Learn and perfect the “digital handshake”

Since you’re not meeting in person, there’s a lack of traditional interactions when the interview first begins. You can’t shake the interviewer’s hand, for example. Still, those first few moments of the video interview are just as important as the first impressions in a typical setting. That’s why The Daily Muse suggests mastering what it calls the “digital handshake.”

“The first five seconds will make or break your digital interview,” digital marketing technology executive Paul Bailo told the Muse. “It is those few seconds, when the hiring manager sees you and you see the hiring manager that the digital chemistry is created.”

Bailo describes the digital handshake as a “slow, confident, professional, firm nod” with “a slight shoulder bend and eyes forward — the other person should not see the top of your head.” If you can master that non-verbal greeting along with a professional hello, it shows that you’re eager to be there and you’re ready for the interview. 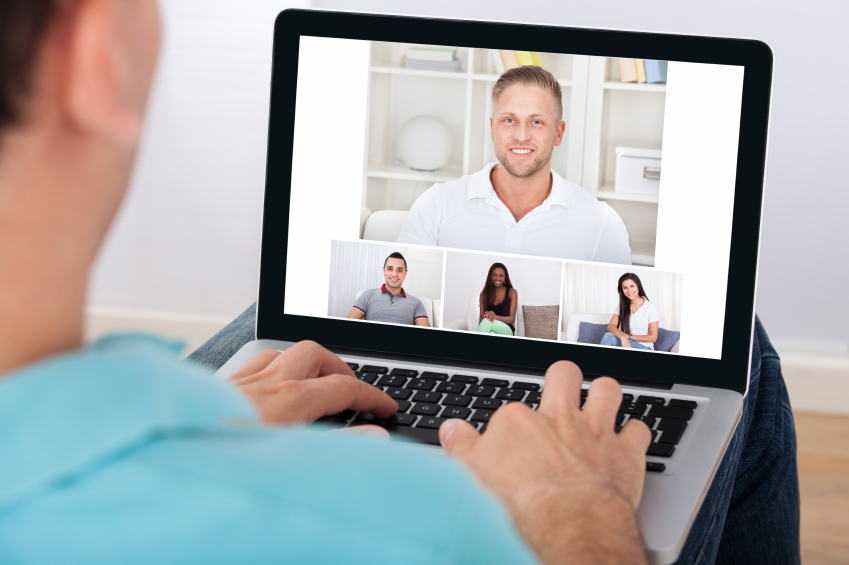 You would never talk over an interviewer while in person, but it can be a little more difficult to blend conversation over a video call. That’s because there’s often a slight visual and/or vocal delay while online, so make sure that you’re not rushing through a question and cutting off the whole question or comment.

Be sure to wait until the interviewer is done speaking, Campbell told Target Jobs, and also be careful not to rush your own answers. If there is a slight delay, it might be awkward to have your jumbled answer come rushing through.

This is also the time to note that if you don’t have a quiet room away from pets, kids, or other interrupting noises, you’ll have a lot more trouble staying on track. If the delays seem like more than a natural break, also make sure to address the issue immediately. “If you’re getting too many blips, it’s good to stop the call (and redial),” director of business development for PGAV Destinations Ben Cober told LearnVest. “The future employers may take away that you’re a problem-solver, and you would provide top-quality service if employed by them.”

Using body language is fairly natural when you’re sharing a room with someone, but it might become less natural over video calls. Smiling is key here, career coach Cheryl Palmer told LearnVest. “Smiling is the best way to break the ice and develop rapport with your interviewer,” she explained. Active listening is also helpful because it means you’ll be nodding your head and expressing positive emotions to show you’re engaged with the interview process.

“As you’re communicating, lean forward,” Bailo suggested to The Daily Muse. “This will show interest and concern and will engage your audience. It will also convey eagerness and willingness to listen.” As always, there’s a balance to this. You want to move around as naturally as possible (using hand gestures if you normally would, and so on.) Staying stock still will communicate that you’re not all that interested in the conversation, and might even cause the interviewer to think the screen is frozen. But if you move around too much and there’s a slight delay, your motions will just become blurry and jumbled. Be careful not to exaggerate arm or head movements too much in order to avoid this.

One final word about eye contact: It’s still vitally important! Job Hunt advises that it’s necessary to focus on the webcam itself, which is what will give the appearance of direct “eye contact” the best. Though you’ll need to keep an eye on your monitor to pick up on the interviewer’s own body language and cues, resist the temptation to focus on that alone. Otherwise, you’ll give the impression of looking down too often.