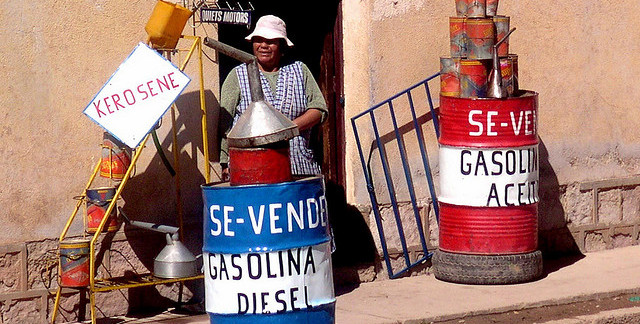 The global energy economy is changing. Coal is falling out of favor for the production of electricity, the locus of demand growth is shifting from developed to emerging economies, and behind it all the United States is poised to become a major net exported of oil and, perhaps more importantly, natural gas.

An early release overview of the 2014 Annual Energy Outlook, the U.S. Energy Information Administration outlines what this transformation could look like over the next few years. U.S. domestic oil production is projected to reach historically high levels by 2016, and natural gas production is expected to increase by about 56 percent through 2040. The U.S. will be so flush with natural gas that exports are projected to increase significantly, while at the same time natural gas overtakes coal as the fuel of choice for domestic electric power by 2040.

Behind this changing tide is the U.S. oil and gas industry. As a group, the industry as measured by the Energy Select Sector SPDR (NYSE:XLE) has lagged the S&P 500 in 2013, climbing 19.5 percent through Christmas compared to 25 percent, but the outlook for 2014 is more optimistic. A report by analysts at Merrill Lynch, which was seen by 24/7 Wall St., highlights six themes that could support the energy industry in 2014 and some companies that are set up to capitalize on the changes. Here are some of the top picks.

The first theme that the folks at Merrill Lynch highlight is rising self-sufficiency in the Northeast gas market. The Northeast gas market is comprised of eight states: Connecticut, Maine, Massachusetts, New Hampshire, New Jersey, New York, Rhode Island, and Vermont. All told, the region is home to about 43 million people, or 12 percent of the U.S. population, and claims about 10 million natural gas customers, or 14 percent of the U.S. total. Natural gas represents about 30 percent of total energy consumption in the region.

Cabot Oil & Gas is an independent company based in Texas, and has a strong presence in the Marcellus shale in Pennsylvania. A strong presence in this region helps increase the company’s exposure to the Northeast market. Cabot is producing about 1.5 billion cubic feet of gas from the Marcellus per day, and recently increased its production guidance.

The folks at Merrill Lynch point at recent sale and purchase agreement with Pacific Summit Energy LLC, a wholly owned subsidiary of Sumitomo Corp., as a driver for future growth. The agreement calls for the sale of 350,000 MMBtu per day of natural gas from the Marcellus shale for 20 years. The gas will be used for the Dominion Cove Point OLND liquefaction project.

The folks at Merrill Lynch point out that companies with a strong presence in the Permian Basin in Texas have outperformed this year, and Pioneer Natural Resources is one of those companies. Shares soared through 2013, closing Christmas eve at $183.84, up 67.51 percent for the year. Merrill Lynch analysts are incredibly bullish on the stock with a price target of $275, representing an upside of about 50 percent.

In 2012, Pioneer Natural Resources chairman and CEO Scott Sheffield told shareholders that Pioneer’s 900,000-acre legacy leasehold position in the Permian Basin is even more resource rich than previously thought.” Production increased by about 45 percent on the year in 2012, and it continues to ramp up production.

It’s important to point out that with a forward price-to-earnings of 34.5, Pioneer is kind of expensive. Part of its valuation has to do with rumors of a possible buyout. The folks at Merrill Lynch believe that Pioneer could be targeted for an acquisition, even with its approximately $26 billion market cap.

Hess impressed the pants off investors at the beginning of 2012 when it announced that it would be closing the Port Reading refinery, selling its terminal network, and focusing on its exploration and production business. “By closing the Port Reading refinery and selling our terminal network, Hess will complete its transformation from an integrated oil and gas company to one that is predominantly an exploration and production company and be able to redeploy substantial additional capital to fund its future growth opportunities,” said Chair and CEO John Hess at the time.

Activism on the part of investors has also helped facilitate beneficial reform at the company. Some of that was done on the part of Elliot Associates, which released a letter to Hess shareholders in March, after taking an $800 million position in the company earlier in the year, advocating for independent nominees to the board.

Exxon Mobil has received a lot of favorable attention over the past few months. Berkshire Hathaway Chair and CEO Berkshire Hathaway gave the company some much-needed love in November when it came to light that his firm had purchased 40.1 million shares of the oil and gas giant.

Exxon Mobil got a bump from Goldman Sachs in December when the rating on its stock was upgraded form Neutral to Buy. In a note seen by Barron’s, analyst Arjun Murti argued that Exxon and the other super majors are not only gearing up for great years to come, but that they’re cheap. “On long-term metrics, Exxon shares look inexpensive versus its own history on an absolute basis and relative to the S&P 500,” he wrote. “Exxon is trading at a discount to its long-run average (1995-2013) on an absolute basis and relative to the S&P 500. Exxon’s 2014E absolute/relative P/E is 11.6X/76 percent, which is below its long-run average of 15.6X/95 percent.”

A possible tailwind for Exxon Mobil — and even other industry players like Chevron and BP — is the evolving natural gas market. Exxon Mobil is fighting to end restrictions on exporting oil and natural gas now that the United States is gearing up to be a net energy exporter.

Schlumberger stock hasn’t performed as well as some of the other companies on this list this year to date, but as one of the top oilfield services companies in the U.S., its prospects are attractive. Merrill Lynch favors larger services companies with larger-cap clients, expecting them to outperform the smaller-end of the industry. Beyond the U.S., though, the company has positive exposure to lucrative markets all over the world.

“The global economic outlook remains largely unchanged as relatively encouraging news among OECD countries and in China has offset lower growth expectations in some of the major emerging economies,” commented CEO Paal Kibsgaard in Schlumberger’s third-quarter earnings report. “In the US, the underlying trends are positive and the level of macroeconomic uncertainty was reduced in the near term following the temporary resolution of the fiscal debate. Demand for oil in 2013 has again been revised upward and current estimates for 2014 point to even stronger growth in demand. Overall, the market continues to support Brent prices at current levels while international natural gas prices remain steady.”