Top 5 Signs the American Dream Is on Life Support 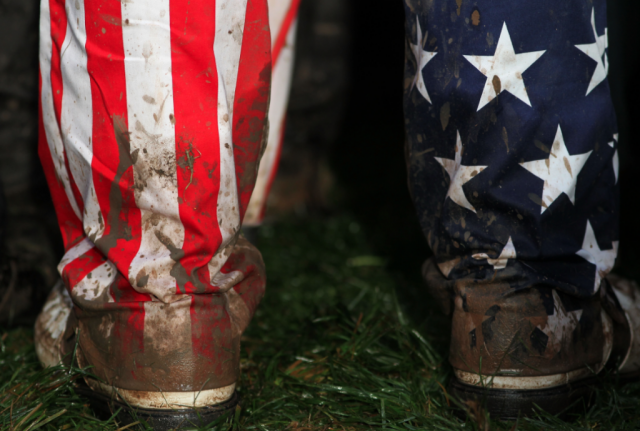 Is the pursuit of happiness turning into a lost cause? The American Dream was once widely considered to be the stuff of legends. No matter who you were, Old Glory provided vast opportunities for prosperity and success. Citizenship was not just a badge of honor, but a chance to cross economic moats into other social classes. However, the times are changing, according to at least one Nobel prize-winning economist.

“The American Dream is a myth,” said Columbia University professor and Nobel prize winner Joseph Stiglitz, during a recent book tour event in New York City. He explains that the United States has some of the worst levels of income inequality and opportunities for advancement among its peers. This situation has been developing for decades amid politics and company policies, but has received more attention in the aftermath of the Great Recession, where wealth gains have overwhelming been enjoyed by those in ivory towers.

On the positive side, some people still dream in red, white, and blue. A Wells Fargo survey finds that 84% of investors believe the American Dream is still achievable. Nearly nine out of 10 non-retired investors remain optimistic they will reach the American Dream. Definitions of the dream include the ability to afford a home, live comfortably in retirement, and enjoy meaningful employment. Interestingly, exceeding their parents’ standard of living was the least-cited component.

Let’s take a look at five warnings signs the American Dream is becoming a myth. 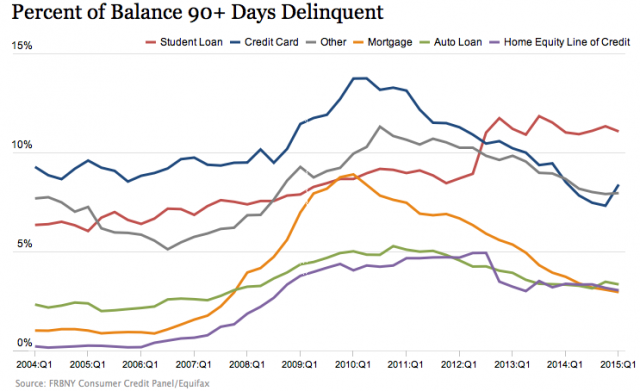 While college graduates typically experience lower unemployment rates and higher lifetime earnings than high school graduates, a college degree can quickly turn into a nightmare instead of the American Dream. Student loans are more popular than any other form of household debt, with the exception of mortgages. Since 2008, total college debt has surged 84% to $1.2 trillion, according to the Federal Reserve. In fact, approximately 40 million consumers have at least one open student loan, with the average balance totaling nearly $30,000 per borrower.

Student loans cripple spending in other areas of the economy. This is highlighted by the fact that millions of graduates can’t even afford their student loan payments, let alone other financial responsibilities like a mortgage. More than 11% of college debt is officially at least 90 days past due. However, due to deferment, grace periods, and forbearance, the Federal Reserve admits the true delinquency rate on student loans is roughly twice as high. In comparison, credit cards and auto loans have delinquency rates of 8.4% and 3.3%, respectively. 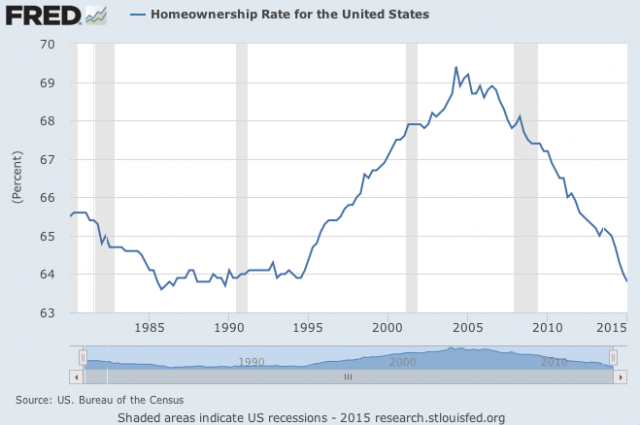 Owning the roof over your head is just one component of the American Dream, but it’s becoming unaffordable for millions of Americans. The median existing home price for all housing types in March climbed 7.8% year-over-year to $212,100, representing the 37th consecutive monthly gain. The median sales price of a new house sold in March reached $277,400, while the average sales price hit $343,300. These price tags might not be so scary if wage gains kept pace, but this is not occurring and the national homeownership rate is plummeting.

As the chart above shows, the seasonally-adjusted homeownership rate for the first quarter fell to only 63.8%, the lowest reading since 1989. A portion of this decline can be attributed to a tighter credit environment after the housing bubble collapse, but renters also face a pricey market.

Zillow reports that rent prices in January reached new highs, with the median monthly rent price hitting $1,350. Out of 859 individual metro areas covered by the Zillow Rent Index, 72% experienced annual rental growth, while 247 metros had growth of 5% or more. Zillow believes rental affordability will continue to deteriorate for at least the next two years. Meanwhile, Enterprise Community Partners estimates that 10.9 million households comprised of 25 million people pay more than half of their income for housing. 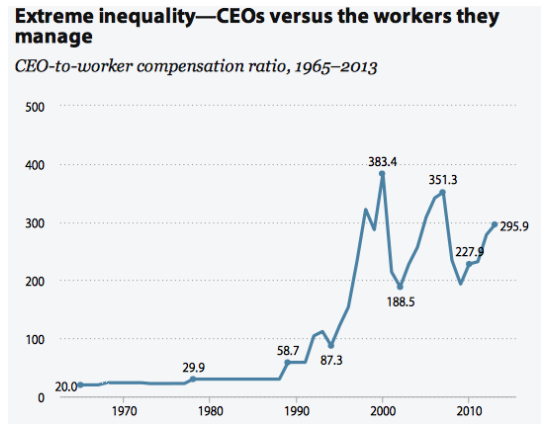 Americans are stuck watching CEOs deploy golden parachutes at a time when wage growth can barely get off the ground. Hourly wages for the bottom 70% of American workers increased less than 11% over the 34-year period between 1979 and 2013, according to the Economic Policy Institute. That equals an annual average of only 0.3% or less. Making matters worse, the majority of the dismal wage growth came from the boom years seen in the late 1990s.

In 2013, CEOs at the 350 largest public U.S. firms made nearly 300 times typical workers’ pay. While this ratio has been volatile over the past decade with the help of stock market crashes, CEO pay never fell below 188.5 times the average worker. In contrast, CEOs only made 20 times what typical workers made in 1965.

Although companies like Wal-Mart, McDonald’s, and Target made headlines earlier this year for raising their minimum wages, employees across the nation are having a hard time finding significant wage growth. According to the Bureau of Economic Analysis, personal income increased a meager $6.2 billion in March from the prior month, or less than 0.1%. Disposable personal income only increased $1.6 billion. 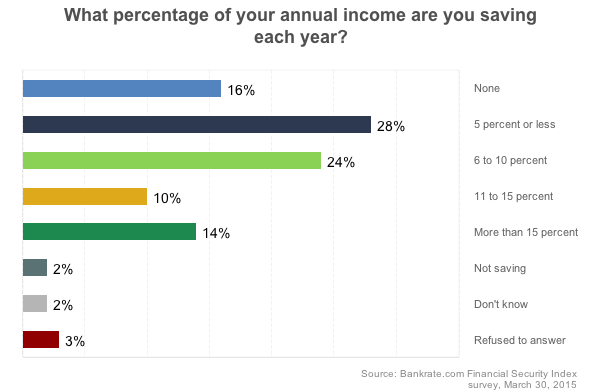 If a comfortable retirement is part of your American Dream, you could be in for a rude awakening. There are two sides to the country’s retirement crisis. On the one side, Bankrate.com finds that nearly half of Americans place virtually no money aside for the future, fewer than one in four save more than 10% of their incomes, and only one in seven workers save more than 15%. The National Institute on Retirement Security (NIRS) reveals that the median retirement account balance totals just $2,500 for all working age American households. The American Dream is indeed a myth to these people.

On the other side of the spectrum are Americans who have the means and desire to take action with their personal finances. Households approaching retirement age that own retirement accounts have a median balance of $104,000, more than seven times the amount of households in the NIRS study who don’t own retirement accounts. The average 401(K) balance at Fidelity just hit $91,800, while the average IRA climbed to a record high of $94,100. Of course, having the means to save considerably for retirement is a crucial component that is often easier said than done. 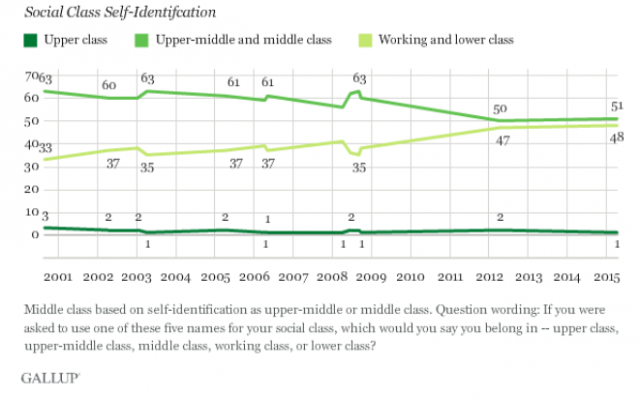 Gallup notes: “One possible explanation focuses on changes in the job market. A big downshift in middle-class identification is found among those with less than a college education, suggesting that increasingly fewer ‘middle-class’ jobs may be available for those without college educations. Further, middle-class identification dropped the most among Americans in their middle-age years, showing that the shifting economy and job market may be most likely to affect the class perceptions of those who are more anchored in their careers, rather than those just starting out or those who are at or near retirement. Similar changes among Republicans and Democrats suggest that politics has not been a major factor in the shift in self-identified class labels.”