7 Charts Revealing How Much Freedom You Could Have in Retirement 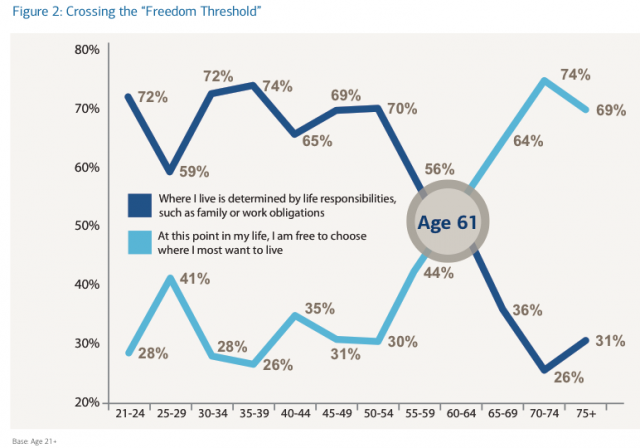 You may have more freedom in retirement than you think. Despite ongoing concerns about the size of nest eggs in America, a new study finds that retirees across the nation are enjoying high levels of freedom and satisfaction, especially when it comes to their homes.

“How and where our nation’s aging population chooses to live will have widespread implications on the way homes are designed, the resources people will need, and how communities and businesses nationwide should prepare,” said Andy Sieg, head of Global Wealth and Retirement Solutions for Bank of America Merrill Lynch. “For most retirees, their home is more than just a financial consideration — it’s a place where family and community come together, and can represent treasured memories or independence.”

Let’s take a look at three ways retirees are living in the best homes of their lives.

Nothing says freedom like escaping the shackles of a mortgage. While the housing crisis of yesteryear certainly derailed financial plans for some Americans, the majority of older homeowners do not have a mortgage. In fact, 72% of homeowners 65 and older are mortgage free. On average, home equity among these homeowners totals $212,800, providing a confidence boost if the need or desire to sell ever arises. Older households represent 22% of all U.S. households, but account for 40% of all home equity.

Merrill Lynch advises in the report:

Retirees often find the freedom to make a scenery change. Last year, 4.2 million retirees moved into a new home. This number is likely to grow over the next decade as the number of older households in the U.S. is estimated to increase by almost 11 million. In comparison, growth in the number of households across all other age groups will be less than 2 million. Overall, 64% of retirees say they are likely to move at least once during retirement, with 37% having already done so. A desire to live closer to family is the top reason among retirees for moving.

Many people assume that once they retire, they will downsize their home to save money and time, but this is not always the case. Merrill Lynch finds that 49% of retirees moved into either a larger home or a same-sized home. The other 51% moved into a smaller home. Retirees purchasing larger homes are motivated to have a place large enough for family members to visit and stay with them. Only 19% say they upsize to have a more prestigious home.

In retirement, home is where the wallet is. Retirees often have more flexibility, time, and financial resources to create their dream homes with renovation projects. In fact, older households account for nearly half of all spending on home renovations, about $90 billion annually. Between 2003 and 2013, spending on home renovations among those age 65 and older increased by 26%, while all other age groups experienced a decline or modest growth in spending.

“With increasing longevity and greater freedom, it’s not surprising that so many retirees are striving to make their homes even more fulfilling,” said David Tyrie, head of Retirement and Personal Wealth Solutions for Bank of America Merrill Lynch. “Achieving your dream home in retirement requires careful forethought and preparation. Whether moving or staying put, it’s important to carefully consider expenses associated with current goals and future priorities, including potential challenges during later years.”