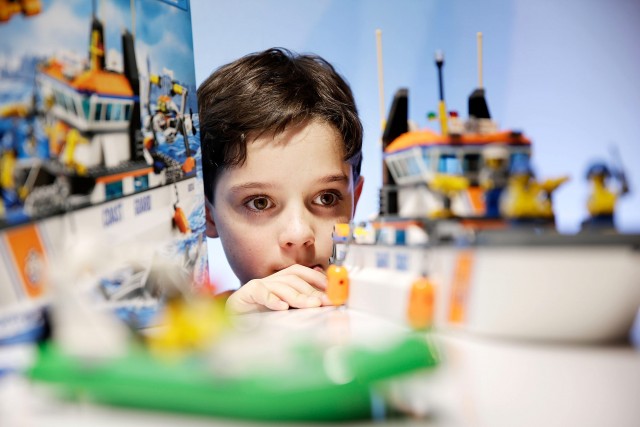 The holiday shopping season is upon us, and many consumers are now making their way to Toys R Us, Wal-Mart Stores, and of course, Amazon.com to stock up on presents that children will soon find under the tree. Some products, like the Xbox One, Playstation 4, and iPhone 5S, are bound to be crowd favorites due to their recent releases, but other classic gifts date back many, many moons and continue to entertain kids no matter what the generation.

Interestingly enough, many of the inventors who initially produced the world’s hottest toys didn’t even mean to do so. Take legos, for example. Legos are on the National Retail Federation’s list of top 10 tip gifts produced by unexpected retailers, and the agency explains that the toy dates back to the 1930s when a Danish carpenter decided to create a simple game for children. In 1932, Ole Christiansen came out with the original eight-pegged block, and discovered that six Lego blocks can add up to 102,981,500 different combinations, helping the carpenter reach his goal and make the possibilities truly endless. The Lego Group is still the fourth largest toy company in the world.

So yes, Sam Walton may have been retail king, and Jeff Bezos e-commerce expert, but the two still can’t boast the honor of creating these time-old toys that they still currently sell. With the help of the NRF’s toy roundup, here are 7 examples of toys, like Legos, that came to existence either on accident or unexpectedly but still enjoy relevance with children today, and are sure to be delivered to many boys and girls this Christmas. 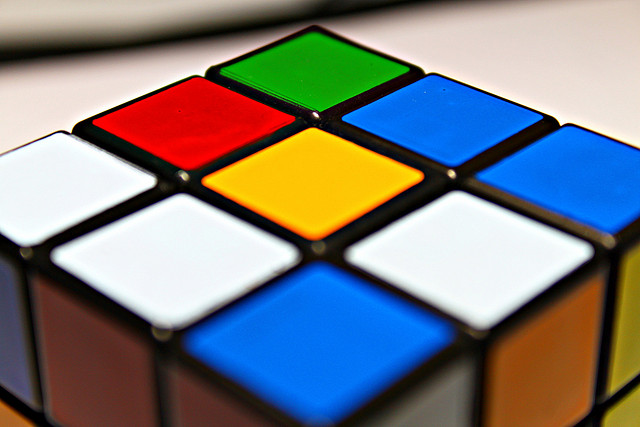 The National Retail Federation’s list begins with the good old fashioned Rubik’s Cube. To many, it is not a toy, but rather a torture device. However, today over 300 million cubes have been sold, and you can still find the frustrating toy on retailers’ shelves everywhere. Like many other toys on this list, the Rubik’s Cube was not created for entertainment purposes, but actually for educational ones. Created back in 1974, Ernő Rubik designed the product to serve as a puzzle for his design students, helping teach them the fundamental rules of 3-D geometry.

The cube took Rubik, himself, 11 months to solve, but for better or worse, it continues puzzling consumers today — and that is thanks to the teacher signing a contract with Toy Corporation in 1979. Some people boast the rare skill of being able to solve a Rubik’s Cube in 30 seconds or less. The rest of us, on the other hand, still struggle — but you’d be hard pressed to find someone who hasn’t given the puzzle a shot at least one time in his or her life. Cheers, Ernő Rubik. 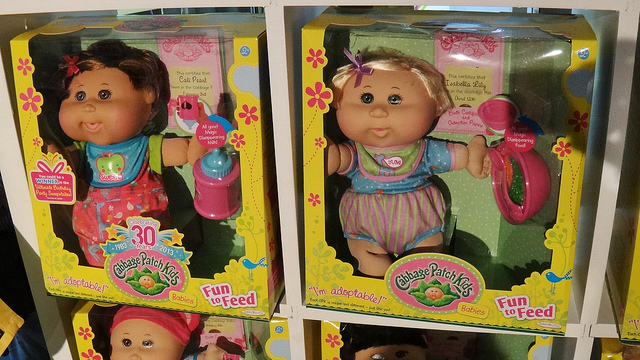 Next up is one of the few dolls that has appealed to both girls and boys dating back to 1982. The round, chubby face of a Cabbage Patch kid is undeniably an American icon, familiar to most Americans who know how to walk. Interestingly, the original designer of these popular Cabbage Patch kids was actually a kid himself, and an art student at that. The NRF explains that Xavier Roberts marketed his “Little People Dolls” at craft fairs and folk art exhibitions before signing a contract with toy company Coleco in 1982.

One year later, they were the most popular holiday toy, and sold 3 million dolls within their first Christmas season. Now, exactly 30 years later, Cabbage Patch kids are still flying off the shelves, and the doll brand is still one of the longest running doll franchises in America. 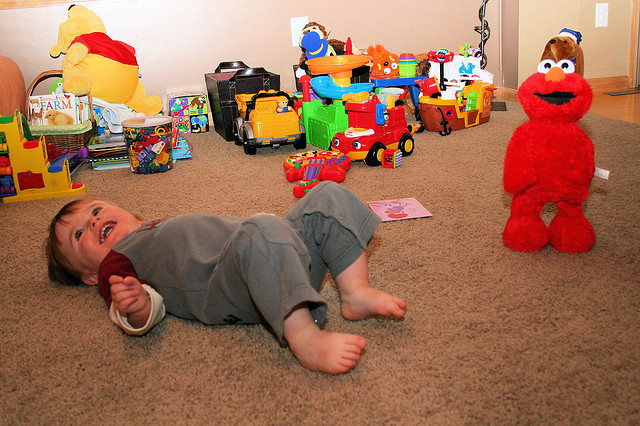 Ron Dubren’s Elmo is a little younger than the toys that precede him on the list, but he still created a craze in 1996 that only can be compared to that enjoyed by the Cabbage Patch kids more than ten years earlier. Now a children’s toy from Tyco Preschool, a division of Tyco Toys, the doll was originally created by artist Dubren not as an “Elmo” at all, but rather a monkey — and yes, who laughed when tickled.

The artist presented Tyco with the laughing chimp in 1992, and the company agreed to buy the laugh technology, but decided to convert the monkey into an Elmo, drawing on the recent Sesame Street craze. According to the NRF, Tyco sold over five million laughing Elmos its first Christmas in 1996, and you can still find the giggly guy in stores today. 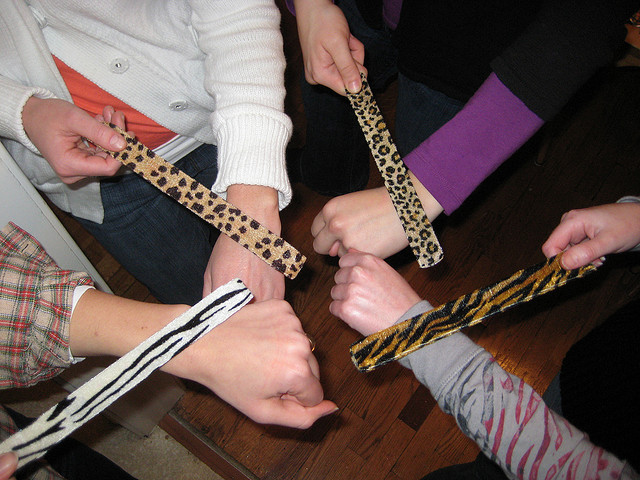 No one can forget the twinge consumers continue to somehow enjoy by the always popular slap bracelets. Because who needs a clasp, when you can just slap a bracelet on? The story of the slap bracelet stands as somewhat fateful, as it was Stuart Anders, who originally created the wrist jewelry, and then incidentally ran into the president of Main Street Toy Co., who liked his idea just as much as Anders did.

Slap bracelets are now sold worldwide, and Anders was able to eventually start his own product design and manufacturing company. Interestingly enough, the jewelry is now (and has been) banned in schools who don’t want the bracelets to be used as weapons or pain inflicters, but their old school charm is still enjoyed by many nonetheless. 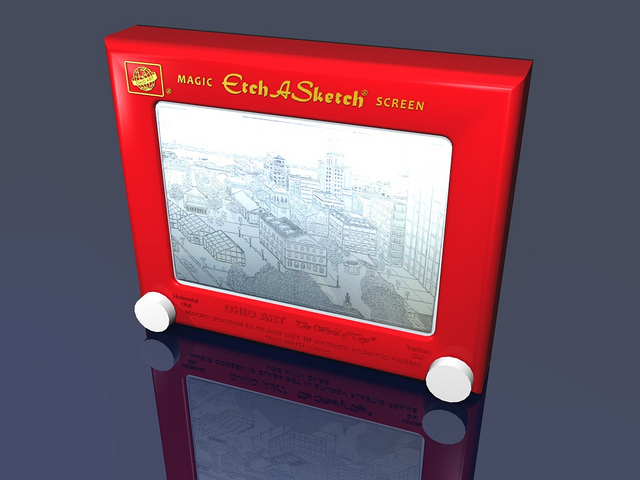 Next, the NRF highlights the age old game of Etch A Sketch, one of the oldest toys on its list. This is another piece of entertainment that was created merely by accident, and its inventor bears the name of André Cassagnes, a French electrician who discovered during a light switch installation that aluminum power can be used to create images. The Etch A Sketch was therefore born in the 1950s, but it was originally called “The Magic Screen” before it was purchased by the Ohio Art Company and promptly given a name change. Etch A Sketch made its debut for the 1960 holiday season, and can still be found in households today, entertaining the youngest to the very oldest. 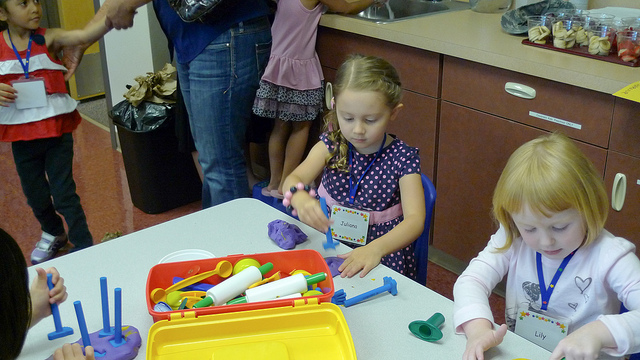 This next toy is one that almost all Americans have accidentally ingested as children. Coming in a variety of colors and always giving off the same plastic aroma, Play-doh has been a childhood favorite for years ever since it hit shelves in 1956. The NRF illuminates that the substance was actually originally invented for the purpose of serving as a wallpaper cleaner, but it wasn’t long before its creators, Joe and Noah McVicker, realized that the non-toxic (thankfully) material could actually appeal to children as another clay look-alike.

Play-doh was shortly thereafter packaged into containers in 1956, and in 1965, General Mills purchased the rights to the iconic substance. The NRF says that over 700 millions pounds of Play-doh have now been sold. 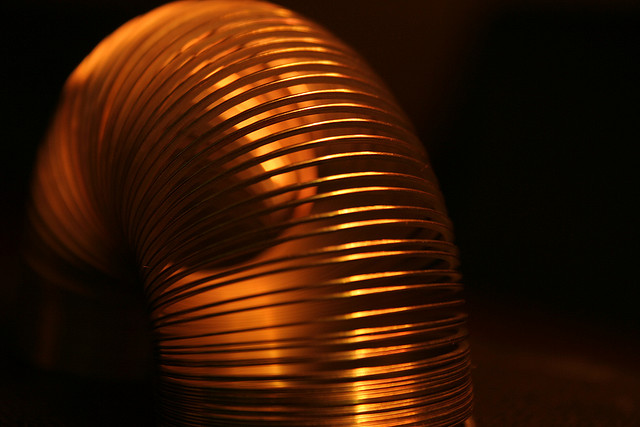 Lastly, we come to the slinky, the helical spring that somehow continues to entertain consumers both young and old. The slinky is actually the oldest toy on this list, and was created in 1943 by a naval engineer named Richard James, who was initially working to develop a tension spring for a naval battleship. As the legend goes — and the NRF highlights — James dropped a spring and watched it hit the ground, coming up with the idea that it would make a good toy for kids. As it turns out, he was right, and the rest is history.

The credit for naming the Slinky goes to his wife, Betty, and the couple won over Gimbels Department Store in 1945, where they sold 400 products within the first 900 minutes of sale. Poof Toys won the rights of the Slinky in 1998.