“We believe we have met the goal of having a system that will work smoothly for the vast majority of users,” read a December 1 progress report on the federal healthcare website conducted by the Centers for Medicare and Medicaid Services, or CMS. 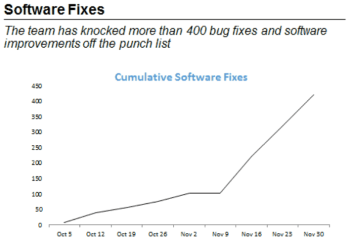 November 30 has come and gone, meaning healthcare.gov, the $630 million portal that links all 36 federal online insurance marketplaces created by the Affordable Care Act, should be running smoothly. Back in late October — after the Department of Health and Human Services scrambled for weeks to find a fix for the error-riddled federally-facilitated health insurance exchanges — the White House promised the websites would be operating “as they were supposed to” by the end of last month.

Now, the question is whether the fixes worked like the administration announced Sunday. From the data continued in the administration’s progress report, along with other anecdotal evidence, healthcare.gov is working much better than it was in October and early November. According to CMS, healthcare.gov functions for 90 percent of the day, not counting scheduled maintainance, a notable improvement from the 43 percent recorded in the first week of last month. Error rates have also been reduced from 6 percent to well under 1 percent, and page-load times are at an acceptable level of less than 1 percent.

“The site is now stable and operating at its intended capacity,” Jeffrey Zients told reporters Sunday morning, The Atlantic reported. “The bottom line: Healthcare.gov on December 1 is night and day from where it was on October 1,” added Zients, a former healthcare management consultant and Office of Management and Budget official, who was charged with leading the repair efforts.

But saying the improvement is “night and day” is different from saying the website is working as it was supposed to work. There are still reasons for concern; because the White House has yet to release information on the error rate for subsidy eligibility determinations or the passage of enrollment information from the website to insurers it is impossible to assess whether the website’s important back-end functions are working properly. What is also unknown is the percentage of people who experience a website malfunction before completing their application.

Still, as the report from CMS emphasized, the administration’s goals for the healthcare.gov update have been met. “The new management system and instrumentation have helped improve site stability, lower the error rating below 1 [percent], increased capacity to allow 50,000 concurrent users to simultaneously use the site and will help drive continuous improvement on the site,” the report said in conclusion. President Barack Obama has upped the ante for the supposedly repaired federal health care marketplaces; he announced Sunday that the fixes would enable the federally-facilitated exchanges to sign 800,000 people a day, as Bloomberg reported. Administration officials only guaranteed the federal website would be able to handle 50,000 enrollees conconcurrently  the repairs were made. 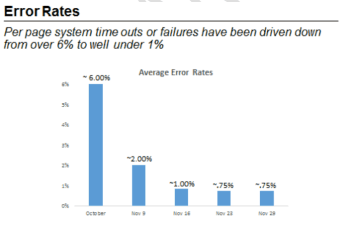 Clear improvements to the consumer experience have been made, and likely for many people, the federal health insurance exchanges function smoothly enough for easy enrollment. As long as people continue to purchase insurance via the exchanges, congressional Democrats are likely to oppose any attempts Republicans may make to repeal the health care reform bill passed in 2010. But if consumers find continuing problems with the federal website, “it is going to help drive this to a huge advantage for the Republican party for a broader agenda that will not be just fixing the website; it’ll be scaling back the law,” Robert Blendon, a professor of health policy and political analysis at the Harvard School of Public Health, told Bloomberg in a telephone interview.

The federal online marketplaces launched on October 1 to numerous software errors and design flaws that caused hours-long wait times, prevented potential customers from creating accounts and completing the 30-step enrollment process, sent insurers the wrong information, and made it difficult for customers to get an accurate cost estimate. Eventually, the catalogue of design and software problems grew to more than 600 items, private contractors who built the site were pointing fingers at one another, and Department of Health and Human Services Secretary Kathleen Sebelius, CMS administrator Marilyn Tavenner, and White House Chief Technology Officer Todd Park were hauled in front of congressional committees. As part of the fixes, the 600-item list has dwindled to 200 needed fixes. However, what remains in need of  fixing is unclear from the report.

What is likely bigger news than the size of the administration’s healthcare.gov to-do list is the admission of how poorly the website ran at its launch. That admission was necessary to highlight how much the website’s consumer experience has improved. The website was functionally offline for most of its first three weeks of operation. Consumers attempting to enroll had an “unacceptable user experience marked by very slow response times, inexplicable error messages, and system outages,” Zients said.