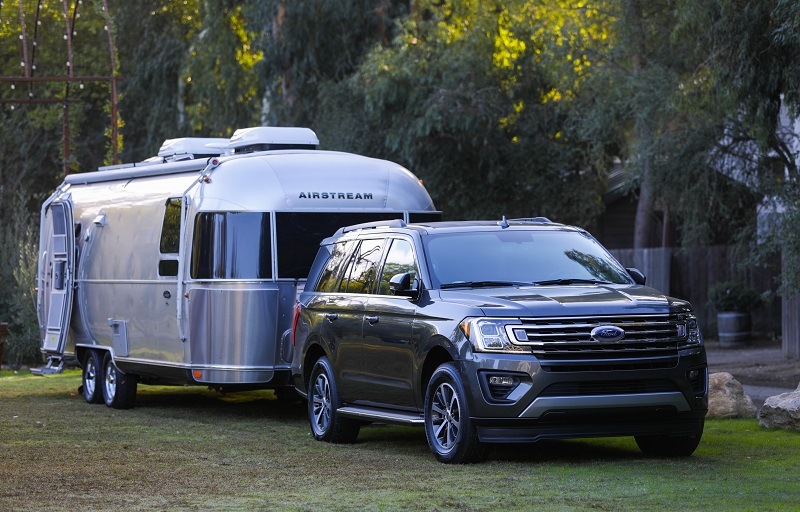 You’re going to like the towing capability, powertrain, and a lot of other things in the 2018 Ford Expedition. | Ford

While Ford Expedition has trailed the XL Chevy SUVs for years, the Blue Oval’s big boy was doing something right. After all, it posted the highest percentage of vehicles with over 200,000 miles on them in 2017. So people were sticking with Expedition and dealing with its shortcomings, which included lots of noise and plenty of gas guzzling.

The tide seemed to turn even before we got behind the wheel of the all-new 2018 model. First, Expedition posted a best-in-class 20 mpg combined for rear-drive models. Meanwhile, new aluminum construction dropped the behemoth’s weight by 300 lbs., clearing space for a more powerful (up to 400-horsepower) engine to do its bidding.

These improvements turned out to be only the start for a model that could very well knock Tahoe and Suburban off their perch at the top of the sales charts. Here are eight things we learned while getting to know the highly capable (if a little expensive) 2018 Ford Expedition. 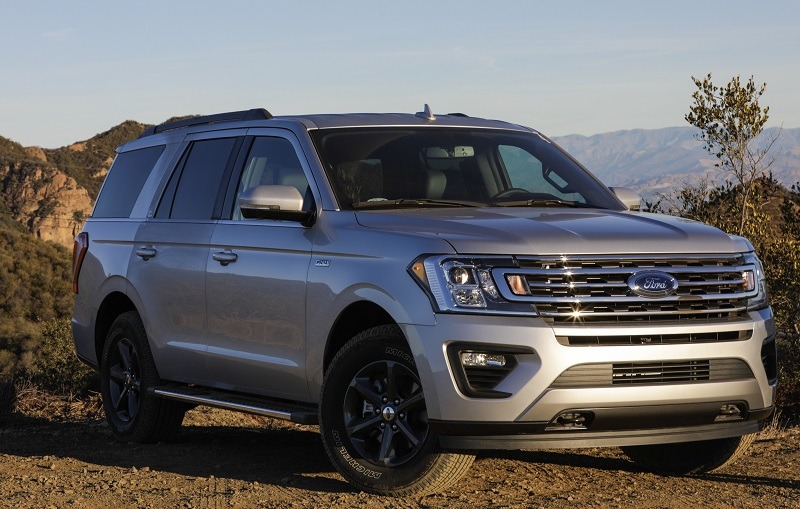 It may be big, but drivers will find a spirited engine and worthy transmission in the new Expedition ($51,695–e$78,545). At a glance, you might not think the added horsepower (from 365 in 2017 to 375 horses in base models) matters much. But you’d be mistaken. Considering the drop in weight, you feel every bit of that power upgrade in the 3.5-liter EcoBoost engine.

Besides, the bigger boost came in the torque department, which now jumps to 470 pound-feet in the base model (a leap of 50 pound-feet from ’17). If you opt for the 400-horsepower Platinum model, you’re going to feel Expedition fly. Its 480 pound-feet of torque make any situation feel effortless. Those who called the last Expedition clumsy (many people did) will never lodge that complaint here.

2. Nimble on highway and hill 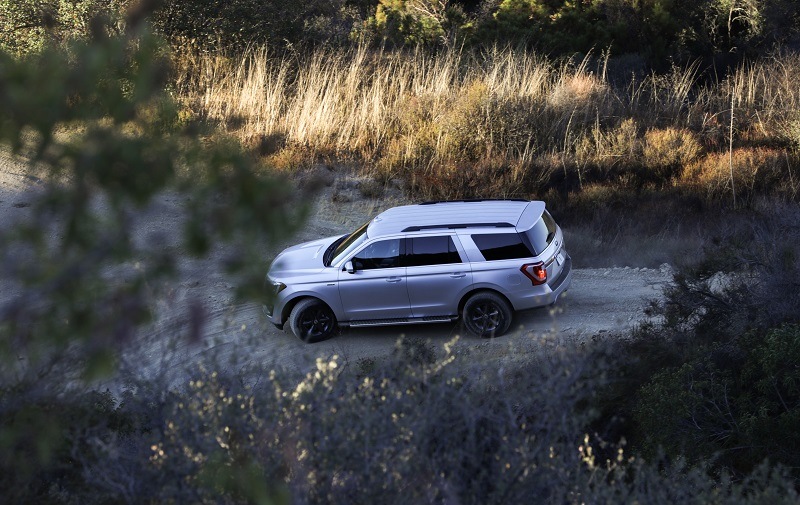 In the two days of driving, Ford made sure we got a look at Expedition in various settings. We started winding around the Malibu canyons and continued with a run down a mildly intense California freeway. There was no struggle whatsoever in these tests. In fact, out first impression was Expedition handled the new 10-speed automatic transmission better than the new Mustang did. The turning radius and ability to tackle curves was especially sharp.

3. A beast for towing 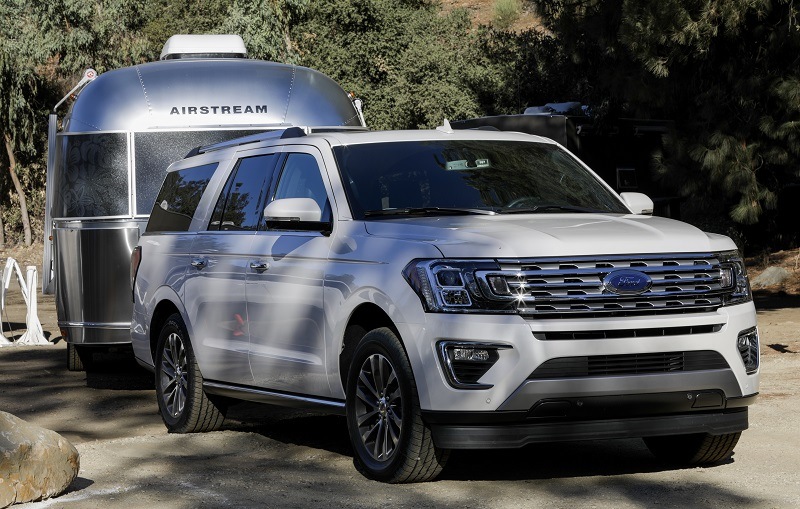 For planning to tow in an Expedition (Ford expects half its buyers will), you’ll have the juice to make it happen. The base model with rear-wheel drive can handle 9,300 lbs. hitched to the back with the trailer package ($1,570). Higher trims and four-wheel-drive editions handle 9,000 lbs. Compared to Suburban (8,300 lbs.) and Tahoe (8,600 lbs.) with Chevy’s max tow package, there is no contest here. New Expedition tech helps here, too (more on that later).

4. No off-road troubles, either 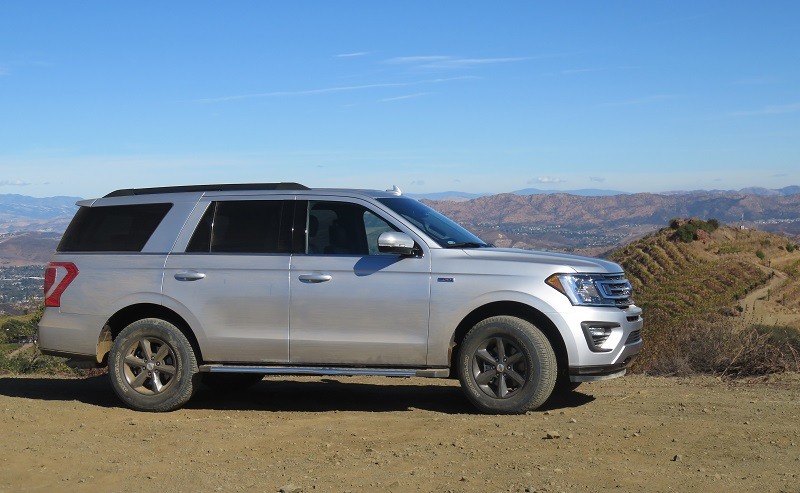 If you have plans to rumble through unpaved territory in an Expedition, the new FX4 package ($1,650) is the choice to make with a four-wheel-drive option. We gave a model a run on a rough bit of uneven, hilly terrain on the ranch where we stayed. FX4 models bring electronic limited-slip differential, skid plates, off-road shocks, and fuel tank protection, among other things.

This package helped Expedition handle the ugly path we tried quite capably. (It was a blast, actually.) On the way down one steep hill, we even tried out the Hill Descent Control, a feature that manages the braking for you as you lope down a rocky path. Everything ran smoothly, including the vertical ascent back up a gravelly hill.

5. A trip to the upscale

If comfort on road trips and luxurious ease behind the wheel is your goal, Platinum trims should be on your radar. This is where Expedition gets pricey, with things kicking off at $72,710. A different grille, plenty of leather, and other upscale touches come with the package, but you’ll be paying luxury prices. For the record, the 2018 Lincoln Navigator starts near the same price ($72,055), though it won’t match Platinum’s list of options.

No matter what trim you ride in, however, Expedition offers comfort in all three rows of seating. Visibility from the back — especially the middle seat in the second row — make it an exciting drive, even. If you have the Panoramic Vista Roof ($1,475), you’ll make it fun for passengers. This experience made me wary of how many Expeditions might soon be further clogging up Manhattan traffic. As an executive car-service ride, it could be popular.

In addition to the electronic suspension controls and Hill Assist, you can get access to the latest tech in a 2018 Expedition. A WiFi hotspot can handle the usual 10 devices and send a signal 50 feet away from the vehicle, Ford said. This model will also be the first automobile that can stream from your SlingBox account on the go. So maybe the kids won’t enjoy those panoramic views after all.

For the towing set, digital Pro Trailer Backup Assist should make reversing easier. Using a rear-facing camera, you simply move a knob to steer the trailer in the preferred direction.

7. You may see some Tahoe here.

Admit it: If you saw this photo and did not read “Platinum” on the side, you might think it said “Tahoe.” The lettering and general shape bear a strong resemblance to Ford’s competitor, but that likeness does not carry through inside. There is a pronounced difference in the feel of the cabin, with Expedition out-classing the XL Chevys in every way.

8. The call for campers

With its towing capabilities and comfort on the highway, you should plan camping trips in this Expedition. When you put down both rows of seat, you can actually make the back of this ride your bed. (We tried it out.) Coupled with the glass roof, it would make for a comfortable night under the stars. Or you could take your equipment out of the trailer and actually pitch your tent. Either way, having the option is nice.

Disclosure: Ford provided a round-trip plane ticket, overnight accommodations, and meals over a 28-hour period so we could bring readers this first-person report.