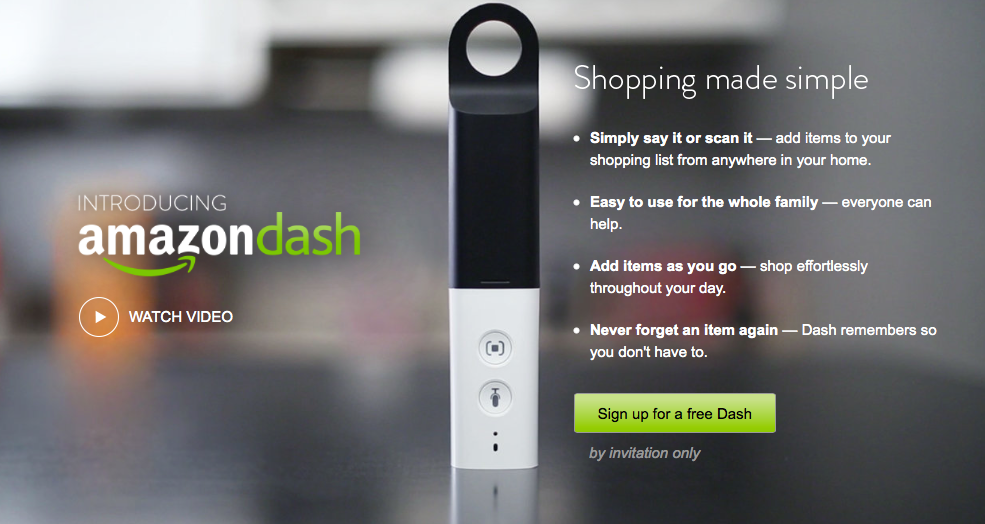 Last Friday, Amazon (NASDAQ:AMZN) announced a new product called Amazon Dash, a wand-like LED scanner that is linked directly to a customer’s AmazonFresh account. The Wi-Fi device allows you to scan barcodes or speak into a microphone to add products to your AmazonFresh shopping list.

Amazon states the four advantages of using Dash on the home page:

While the concept is pretty cool, it still relies heavily on the yet unproven business model in AmazonFresh. An add-on to Amazon Prime, AmazonFresh is Amazon’s grocery delivery service. The service costs $299 total (an added $200 onto the regular Prime service) and its highlighted features include:

Currently, it’s only available in the San Francisco, Southern California, and Seattle areas. Reuters reports that, “The company has plans to launch AmazonFresh … in roughly 20 urban areas in 2014, including some outside the United States.”

While the jury is still out on Fresh, competition like Wal-Mart’s (NYSE:WMT) “Walmart To Go” delivery service is not slowing down. Its service doesn’t cost a fee and as mentioned on The Motley Fool, “Today’s consumers don’t like commitments and would prefer to pay as they go. Wal-Mart’s delivery service costs $5 to $7 per order. And the minimum order is $30, as opposed to Amazon’s $35.”

Wal-Mart also has the added benefit of exploring the in-store pickup model. Moskowitz further explains that, “You might think this would hurt margins, which is understandable, but there’s a reason for Wal-Mart’s madness. According to its own study, approximately 55 percent of its surveyed customers would prefer to pick up groceries than have them delivered, primarily because it would allow them to pick up items they forgot. From Wal-Mart’s perspective, this means that it’s likely for many customers to enter the store. This, in turn, leads to sales of more items, sometimes higher-margin items.” It would appear that Wal-Mart, with its already present brick-and-mortar stores and higher profit margins has a leg up on Amazon.

The year 2014 may prove to be a defining year for AmazonFresh as Wal-Mart, Whole Foods, and Safeway continue to expand their grocery delivery services.